The Peerless Prognosticator is ON THE AIR!!! -- Caps at Canadiens, March 15th

The Washington Capitals take to the road for their last long road trip of the year, beginning tonight in Montreal as the Caps visit the Canadiens at Bell Centre…

“I’ve been meanin’ to ask…what’s with that ‘on the air’ thing? You aren’t on the radio.”

It’s a phrase, cousin, sort of like the old Lone Ranger show.

No, I’m “The Peerless Prognosticator.”

We might not have attained “super hero” status, but the Caps certainly are playing “super” these days, if winning is your benchmark. The Caps take the third longest winning streak in franchise history into tonight’s contest with Montreal. Washington will be catching Montreal on something of a hot streak of their own, the Canadiens having won six of their last seven contests, four of those wins coming away from Bell Centre. The teams’ overall numbers look like this… 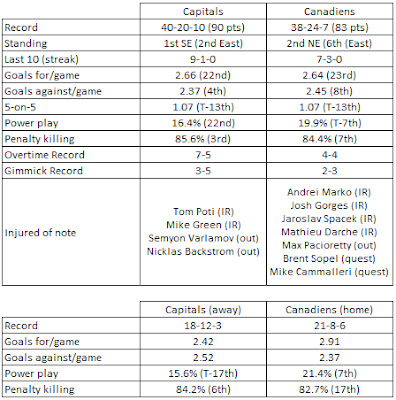 Although Montreal has had some success on the road, lately, it is Bell Centre where the Canadiens shine, having posted a 21-8-6 record in front of the home fans. It just has not been especially hospitable to the home team lately. Since January 22nd the Canadiens have posted a comparatively modest 4-2-3 record. Scoring has not been a problem for Montreal at home in those nine games; they averaged 3.22 goals a game in that stretch. The defense, though, has been a bit inconsistent. Goalie Carey Price pitched two shutouts among those four wins, but otherwise the Canadiens allowed 23 goals in the other seven games.

In some respects the Canadiens are a tale of two contracts. Tomas Plekanec could have taken the free-agent route last summer, but in June he signed a six-year, $30 million deal. In return, Plekanec has posted 21 goals and 53 points so far this season to lead the Canadiens in both categories. He is 2-5-7, plus-5 in his last eight games, including a game-winning goal against Pittsburgh last Saturday. Plekanec has been particularly effective at home, having posted a 16-17-33, plus-17 line in 35 games at Bell Centre. He doesn’t seem to like Tuesday games very much, though, what with only a goal and six assists in 14 Tuesday night games this season. He is 10-10-20, plus-6 in 22 career games against the Caps, including an assist in his only appearance against Washington this season.

At the other end of the contract spectrum is Scott Gomez. In 2007 Gomez signed a seven-year, $51.5 million deal with the New York Rangers. It did not go well, despite his recording 128 points in 158 games over two seasons with New York. Gomez was sent to Montreal as the centerpiece, so to speak, of a seven player deal, making that $7.4 million cap hit the Canadiens’ problem. If anything, Gomez’ production has deteriorated with Montreal – 19 goals and 93 points in 145 games over two seasons with the Canadiens. He is 7-27-34 this season, and his minus-16 is by far worst on the team. It gets worse. Gomez has not had a goal since February 5th (16 straight games) and has only one tally in his last 27 games. Over those 27 games he is 1-11-12, minus-8. Against the Caps he has a career mark of 10-22-32, minus-1, in 39 games.

Montreal has five defensemen with at least ten points this season, one of them James Wisniewski. Montreal obtained Wisniewski from the New York Islanders last December for a pair of draft picks – a deal vaguely similar to the one that brought Dennis Wideman to the Caps at the trade deadline. In 30 games with Montreal since the deal, he is 5-17-22, plus-3. Given that the Canadiens have had to dress 13 defensemen this season, Wisniewski has provided a measure of stability to the blue line, averaging more than 22 minutes a night and scoring at a rate (0.73 points-per-game) greater than any other Montreal defenseman. In those 30 games he has four power play goals and two game-winners, the later leading Montreal’s defense.

The Canadiens have a fair amount of veteran experience on the blue line – Roman Hamrlik has played in almost 1,300 NHL regular season games. Hal Gill has played in almost 1,000 games. Even Wisniewski, at age 27, has more than 300 regular season games on his resume. It is a suitable environment for a youngster like P.K. Subban to develop, and perhaps accommodate a more brash style than his veteran brethren. Subban has developed something of a reputation for getting under opponents’ skin and being comfortable in the spotlight. But it’s not as if he can’t play the game. Subban is second on the Canadiens in scoring among defensemen and third among all rookie defensemen in scoring. He also sits atop the list of rookie defensemen in goals (tied with Cam Fowler and Kevin Shattenkirk) and leads all rookie defensemen in power play goals. On the other hand, it is worth noting that he is second among all rookie defensemen in penalty minutes, and he has sprinkled his fouls around. Nine tripping penalties, six roughing penalties, four each for interference and slashing. Throw in four fighting majors and a misconduct, and it is evident that opponents can get under his skin, too.

With the arrival of Jason Arnott, Alexander Semin seems to have refocused his game. In his last six games, often playing alongside Arnott, Semin is 3-3-6, plus-3, and has had opportunities for much more. He is 10-5-15 in 15 career games against Montreal and has the kind of skill that can make an inexperienced defenseman look more than a bit foolish. If Subban in defending against the second line, how Semin fares might be the game within a game.


1. Check, please. Montreal is not a big hitting team, but they will hound a team all over the ice. The Caps have been using their superior size against team with success lately, keeping puck in deep and making teams work to get pucks out of their own end. It will be the Canadiens speed and tenacity against the Caps ability to use force and skill to maintain a territorial advantage.

2. You’re blocking, you’re blocking. Last spring, the Canadiens beat the Caps in the last three games of the playoffs with their ability to block shots as much as they did with Jaroslav Halak’s acrobatics. The Canadiens are sixth in the league in blocked shots. The Caps need to find shooting lanes.

3. 60 minute game, 40 minute decision. We know that the Caps lead the league in winning percentage when allowing the first goal, but a key here is the state of things after 40 minutes. Washington has not lost in regulation this season when leading after two periods (24-0-2), Montreal has lost but once (26-1-4). The thing is, though, Montreal has only won once in regulation when trailing after 40 minutes (1-22-2), the Caps have won eight times (8-17-4). If the Caps lead after 40, it’s a really good sign.

In the end, these are similar teams in many of their numbers – scoring, goals allowed, five-on-five play, power play, penalty killing. If there is an edge here, it is in the skill level among the Caps. The other side of that coin is effort. If effort is applied to skill, the grit of the other team isn’t likely to prevail. Last spring, the Caps just didn’t match the level of effort of the Canadiens in the last three games of their playoff series. If the Caps’ effort matches their skill level, they’ll be fine with nine.