Y'all are missing the obvious symbolism

Much has been made about this photograph of Capitals players enjoying a ride at a local amusement park as part of a season ticket holder event... 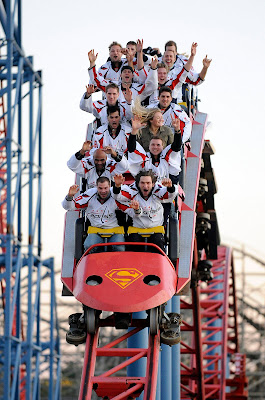 First, JP over at Japers' Rink, then Puck Daddy over at Yahoo! There might be others. The worry is that the picture is a symbolic representation of a potential decline in the Caps' fortunes this year.

I think my esteemed fellow wizards have missed an essential detail in the photograph...the Capitals are smiling. Players on a club expected to go far, but who do a collective face plant in the 82-game season would not be expressing unabashed joy in such a representation.

The Peerless is here to interpret the photo in the only way it could. Consider, the coaster (representative of the ups and downs of a hockey season) has just crested. It has reached and scaled the summit. And now, the players are expressing a certain amount of joy. As you would expect, Alex Ovechkin -- seated front left (the top line left wing) is especially exuberant, not unlike his expression when scoring goals.

Don't think regular season...think "playoffs." The picture is a representation of a team expressing joy in the aftermath of having scaled the ultimate summit -- winning the Stanley Cup. And if you need further convincing of The Peerless' interpretation, consider Jose Theodore. He still wears a mask of concern on his face, as befits the most important position on the ice in the playoffs. But he looks as if he has a hint of relief in his expression as well. Besides, the hero always gets the girl.
Posted by The Peerless at 12:43 PM 4 comments:

The Toronto Sun offers up its take on the top 50 players in the NHL today. Surprisingly (Toronto being in Canada, last time we looked), they ranked Alex Ovechkin number one among the top 50.

The Peerless thinks a recount is in order. Why? Well, given the accomplishment of the second ranked player, you would, too...

He's maintained an average of 1.56 goals per game since his start in the NHL.

"The Soccer Mom on Steroids" 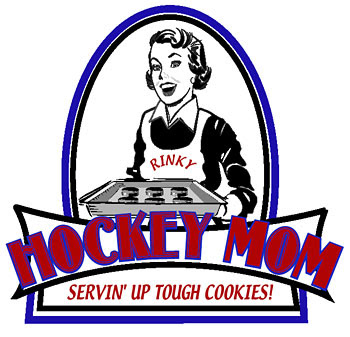 So stated Matthew Grose, who is the general manager of the SkateQuest rink in Reston,Virginia. He was describing a "hockey mom," who is enjoying a turn in the spotlight in the quadrennial circus known as the campaign for President of the United States.
Whatever your politics, most folks can probably agree (certainly hockey kids, if they know what's good for them) that "hockey moms" are, indeed, a special breed.

We couldn't find a reference in searching for the terms, so we're going to take it upon ourselves to declare October -- that month when the air turns frosty and hockey kids start thinking about getting on the ice -- "Official Hockey Mom Month."
Lipstick optional.
Posted by The Peerless at 6:20 AM 1 comment: