The Peerless Prognosticator is ON THE AIR!!! -- Game 34: Capitals at Rangers, December 23rd

The Washington Capitals, fresh of a brief stop at home after a three-game road trip, head back on the road in the last contest before the Christmas break.  The Caps will head to New York, where they hope to leave the Rangers with a stocking full of coal or, failing that, beating them to get some separation over them in the Metropolitan Division standings.

The Rangers come into this contest on a roll, but it might be something less than it seems.  Winners of six straight coming into this game, the Rangers started their good fortune with an overtime win over the Pittsburgh Penguins.  After that, however, the competition was a bit underwhelming.  They beat a Vancouver team for the Canucks’ fourth straight loss in a streak that would reach five games. Then the Rangers beat Edmonton, Calgary, and Carolina twice in a home-and-home set.  None of those teams seem likely to compete for playoff spots in the second half of the season.  Nevertheless, the Caps are just two points ahead of the Rangers, a team that holds two games in hand over Washington.

In their six-game winning streak, 11 different players shared in the 19 goals scored, Rick Nash and J.T. Miller leading the club with three apiece.  Seventeen different players recorded points in the six-game streak, including goalie Henrik Lundqvist, who notched an assist on a Derek Stepan goal in the Rangers’ 5-2 win over Calgary on December 16th.

Mats Zuccarello is the other Ranger with six points in the winning streak (2-4-6).  It follows a dry stretch in which he had only two points in nine games in which the Rangers were stumbling at 4-4-1.  Zuccarello, who established a career high in goals last season with 19, is on roughly the same pace so far this season, his six goals in 29 games working out to a 17-goal pace.  He is 0-1-1 in six career games against the Caps.

Ryan McDonagh managed only six assists without a goal in his first 20 games this season, a start that was interrupted by an 11-game absence with a shoulder injury.  In the Rangers’ six-game winning streak he has scored his first two goals of the season and tacked on a pair of assists for good measure.  He is back to logging big minutes, though.  Since returning from his injury on November 28th he has not played less than 21 minutes in any game and has topped 25 minutes twice in ten contests.  McDonagh is 1-7-8 in 13 career games against Washington. 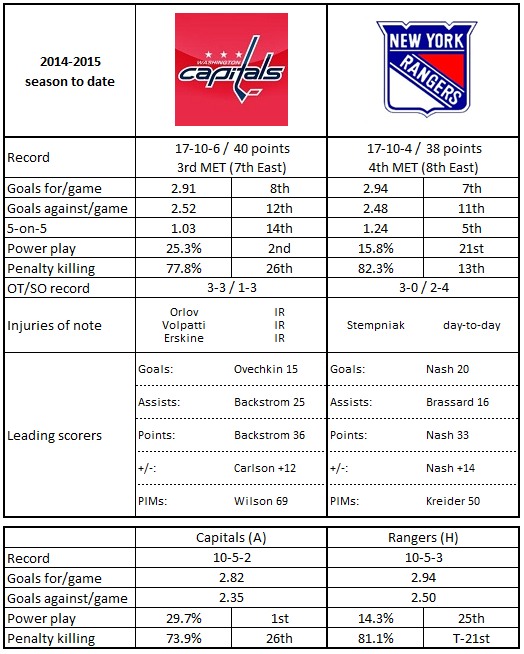 1.  Is Martin St. Louis starting to slow down?  With 23 points in 31 games, St. Louis is on a pace for 61 points.  It would be his lowest point total for a full season since he finished with 61 points in 80 games in 2005-2006.  Although he has ten goals this season, the only other Ranger in double digits, he does not have one in his last seven games.

2.  The Rangers will be the second straight opponent that the Caps will find difficult to score on in the first period.  The Rangers are tied with Ottawa (who the Caps defeated, 2-1, on Monday) for allowing the third fewest first period goals this season (21), behind Nashville (20) and St. Louis (19).

3.  The Rangers have played 31 games, and nine of them ended in shutouts.  They have eight of them, while having been shutout once themselves.

5.  Once upon a time, the Rangers were known as a shot-blocking machine.  Not so much these days.  They rank 24th overall in blocked shots (434).

2.  After scoring twice in the second period against Ottawa on Monday night, there are only three teams having scored more second period goals than the Caps (37) – Dallas (40), Anaheim (40), and Toronto (43).

3.  Only Edmonton has won fewer games (none) when trailing after the first period than the Caps (1).

Troy Brouwer is not counted on to be a scorer on the order of an Alex Ovechkin, but he is expected to contribute the secondary scoring that makes clubs successful.  And that makes his recent play a bit odd.  He has four goals in his last seven games, two of them in his last four games.  In those last four games, though, he has only four shots on goal and was held without a shot on goal against Ottawa on Monday night.  It was the second time in five games he did not record a shot on goal.  The second line already has shooting issues in the person of Marcus Johansson.  One hopes it is not contagious.  Brouwer is 2-1-3, minus-1, in 13 career games against the Rangers.

Now the schedule ramps up in terms of quality of competition.  The Caps get the Rangers, Penguins, and islanders to close the 2014 portion of the season, all on the road.  The Caps have the best road record in the Eastern Conference (standings points earned), so if there is a time to face these three teams on the road in succession, now is the time.  In the Rangers the Caps will be facing a decent team on their own rink, but hardly a great one (10-5-3, seventh in the East in home standings points earned.  It should make for an interesting game, but we know how this ends.