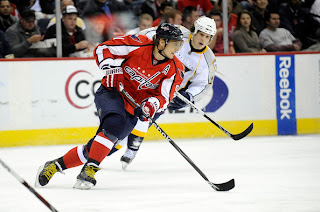 What it comes down to, and this is something we think all of us can agree on, is that there is no “Sergei 2.0” likely to be found out there. This year is a particularly thin year for finding someone who could assume that second line center role for the Caps. But finding a solution to that problem is why George McPhee makes the big bucks. Maybe he can pull a rabbit out of his hat.
Posted by The Peerless at 8:29 PM 10 comments: