The Peerless Prognosticator is ON THE AIR!!! -- Game 43: Flyers at Capitals, January 14th

When last we saw the Washington Capitals and the Philadelphia Flyers, the home team was celebrating a 3-2 overtime win over the Capitals on a power play goal by Jakub Voracek.  The Capitals get to return the favor on Wednesday night before a national television audience at Verizon Center as the Flyers make their first visit of the season to 7th Street.

Philadelphia comes into this game on what for them, at least this season, is a tear.  The Flyers have won three of their last four games, all at home, the fifth time this season that the Flyers have won three of four games (they do not have a four-game winning streak).  The good fortune could not have come at a better time.  Before their recent push, the Flyers lost five in a row (0-4-1) and were in danger of dropping out of playoff consideration altogether.

As it is, Philadelphia is hanging by a thread to playoff relevance.  As they head to Washington, the Flyers are 11 points behind the New York Rangers for fourth place in the Metropolitan Division, and they are 11 points behind the Boston Bruins for the second wild card spot.  If 97 points is what it takes to get a playoff spot (Boston’s current pace), the Flyers will need 56 points in their last 39 games, a 118-point pace over an 82-game season.  It’s not impossible, but it would not be the way to bet.

Even the Flyers’ recent three wins in four games has a bit of a mirage quality to it.  They defeated Ottawa in a Gimmick, beat Washington on an overtime power play, then lost to precisely the team they had to beat – Boston, by a 3-1 margin – before putting together what might be their best performance of the season, a 7-3 win over the Atlantic Division-leading Tampa Bay Lightning.

The win over Tampa Bay just made the strange run stranger in that head coach Craig Berube started Rob Zepp in goal in what was just Zepp’s second NHL appearance.  Zepp, a former fourth-round draft pick of the Carolina Hurricanes, has won both of his NHL appearances without the benefit of saving as many as 90 percent of the shots he faced in either game.

Until the Flyers lit up the Lightning for seven goals they were having trouble lightning the lamp.  In five games leading up to that goal-fest, the Flyers managed to score a total of eight goals, three of them against the Capitals.  As it is, 15 goals in six games to start 2015, almost half of them in one game, is neither especially productive nor efficient.

Three players – R.J. Umberger, Chris Vandevelde, and Voracek – lead the team in 2015 scoring with two goals apiece.  Voracek is the league’s leading scorer (17-35-52), so his production hardly seems surprising.  However, Umberger and Vandevelde have combined for just 10 goals in 76 man-games between them. 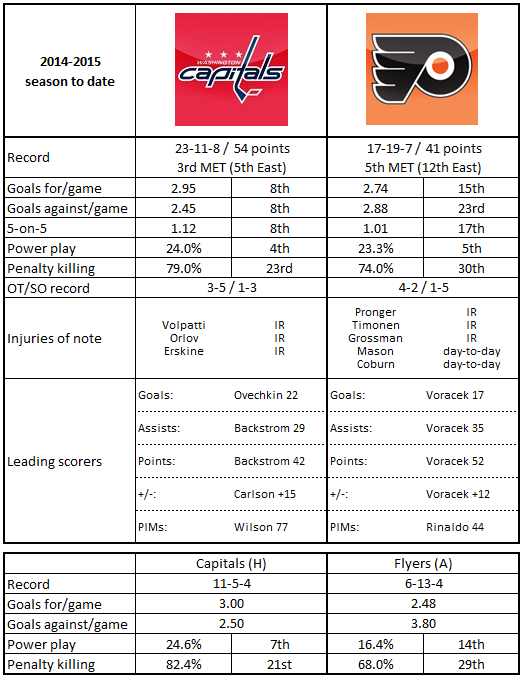 1.  Slow starts are rather common for the Flyers.  Only 16 times in 43 games have they scored first, and their 11-4-3 is the 14th-best winning percentage (.688) in the league.  It gets worse when they trail first.  Only three teams have more losses overall than the Flyers (17 losses in regulation, four in extra time) when trailing first – Edmonton (23 losses) and Buffalo (24).  This is not the sort of company a team with playoff aspiration wants to keep.

2.  No team has allowed more power play goals on the road than Philadelphia (25), and they have the second worst penalty kill rate in the league on the road (68.0 percent).  Only Buffalo (67.6 percent) is worse.

3.  Penalty killing is killing the team in another respect.  On a period-by-period basis, the Flyers are not doing badly overall in goal differential: minus-3 in the first period of games, minus-1 in the second period, and minus-4 in the third period.  They also have scored more 5-on-5 goals (75) than they have allowed (74).  But while they have the third highest number of power play goals scored overall (34), they have allowed more than any other team (38).

4.  Philadelphia is one of two teams (Toronto is the other) with three players among the top dozen in power play goals scored: Wayne Simmonds (tied for third with nine), Claude Giroux (tied for sixth with eight), and Jakub Voracek (tied for 12th with seven).

1.  The Caps have displayed a consistency at a high-level on defense in at least one respect.  They are in the top-ten in fewest goals allowed by each period: 29 goals against in the first period (sixth-fewest) in the league), 36 goals in the second period (tenth), and 33 goals in the third period (tied for eighth).  Unfortunately, only three teams (Edmonton, Colorado, and Dallas, all with six) have allowed more goals in overtime than the Caps (5).

2.  Washington has the second-best winning percentage in the league in games decided by three or more goals (.778/7-2).  It seems it is harder to blow out a Barry Trotz-coached team.

3.  On the other hand, only three teams (Calgary, Ottawa, and Tampa Bay) have been shut out fewer times than the Caps, who have been blanked only once this season, that on November 14 by the Devils, 1-0.

With Steve Mason expected to miss two weeks to a lower body injury, the question for the Flyers is who can they turn to in goal?  Ray Emery did not do very well in relief of Mason when he was injured against Boston – three goals allowed on 13 shots in a 3-1 loss – and he was left on the bench in favor of Rob Zepp against Tampa Bay because head coach Craig Berube “liked his energy.”  Emery has struggled quite a bit this season.  His 7-7-1 win-loss record might be charitable given his 3.21 goals against average and his .889 save percentage.  It gets worse.  After going 4-0-1, 2.44, .924 in his first five appearances this season, Emery is 3-7-0, 3.57, .869 in his last 11 appearances.  If Mason is out two weeks, and Zepp’s energy has a shelf life, then Emery is going to have to be a wall in goal, or the Flyers’ season will be over by the end of the month.

Matt Niskanen is on a pace to finish the season with a scoring line of 4-21-25, well off last year’s 10-36-46 with the Pittsburgh Penguins. However, that season in Pittsburgh would seem to be the exception of Niskanen’s eight-year career. Taking away his 2013-2014 results, Niskanen has averaged 5-19-24 per 82 games. He is having a very “Niskanen” year, at least in terms of his offensive output. However, he has only one point in his last 14 games, an assist in the Caps’ 6-2 win over Toronto last Wednesday. He is part of decidedly “right-handed” offense from the blue line (all three Caps defensemen with at least ten points are right-handed shots), but he is in a bit of a slump at the moment. In 20 career games against the Flyers, Niskanen is 2-6-8, minus-6.

The Caps have not been flashy in their recent 13-1-4 run, and that style would suit them well in their rematch against the Flyers.  Philadelphia comes into this game perhaps not playing quite as well as their recent 3-1-0 record would suggest, and there are the usual goaltending issues with injury sprinkled in.

This game could serve as a nice springboard for the Caps before they head to the road to meet Nashville and Dallas.  On the other hand, it is a team good enough to bite the Caps in the backside (again) if they are taken lightly.  Guess which way we think this goes...