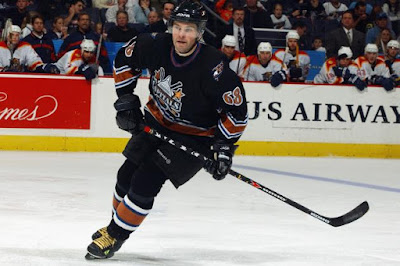 The cousins thought it would be a fine idea to embark on an occasional summer series asking the questions, “what if today didn’t happen the way it happened back then?”  In other words, what might have happened had a transaction on this or that date not taken place?  Of course, the cousins having an idea pretty much ends there.  They always seem to be otherwise occupied when it comes to actually putting the idea to paper.  Be that as it may, it’s not a bad way to while away the summer.  We’ll get started on this with perhaps one of the most famous dates in Capitals history, July 11th.

No, it’s not going to be a retrospective on the Capitals career of defenseman Marc Chorney, who was signed by the Caps on this date in 1984.  Chorney never played for the Caps (unlike his son, Taylor, who does), spending his last season in pro hockey skating with the Binghamton Whalers in the AHL.  It would be 17 years before the Caps pulled the trigger on another deal on this date, and it was the blockbustiest of blockbusters.

Less than three months removed from losing a first round playoff series to the Pittsburgh Penguins in six games, the Caps executed a deal that brought one of the Penguins’ key elements – Jaromir Jagr – to Washington along with defenseman Frantisek Kucera in exchange for prospects Kris Beech, Ross Lupaschuk, Michal Sivek and future considerations (another term for “cash”).

Jagr’s arrival in Washington was met with great joy and anticipation, but his departure less than three seasons later was met with mutters of “good riddance.”  We won’t go back over that difficult history, but rather wonder what might have happened if the summer of 2001 had not been as eventful.  The rest of that summer saw a few low-wattage deals – the acquisition of the Ferraro twins Peter (free agent) and Chris (in trade from New Jersey), and claiming Glen Metropolit off waivers from Tampa Bay.

The lack of action on the roster could not cover up a disturbing fact.  The Caps had not won a playoff series since winning the Eastern Conference final against the Buffalo Sabres in 1998 to go to the Stanley Cup final, missing the playoffs entirely in 1998-1999 and then losing first-round matchups to the Penguins in each of the next two seasons.  And, they were getting old.  Ten of the 19 players to take the ice in the home opener of the 2001-2002 season against the New Jersey Devils were past the age of 30; three of them – Adam Oates, Joe Reekie, and Sylvain Cote – were at or past the age of 35.

The Caps did have some youth in the lineup, though.  Kris Beech won a spot on the roster after playing four games with the big club the previous season.  Beech slotted in the third line center spot behind Oates and Trevor Linden.  At the age of 20, only Brian Sutherby was younger in that lineup to open the 2001-2002 season.

For the Caps, experience was not helping, nor was youth, such as it was, providing a spark.  The team dropped its first half dozen games of the season, the last five of them on the road, to dig themselves an early hole.  By the time October ended, a month in which the Caps played nine of 12 games on the road, they were 2-9-1-0 (ties still being a result that season).  The woes were not limited to their on-ice performance, either.  Linden, who spent nine and a half seasons in Vancouver before being traded to the New York Islanders (followed by a stint in Montreal before coming to Washington), never seemed to find his game with the Caps, managing only four goals and three assists in 28 games before he was traded in November back to the Canucks with a second-round draft pick for a first and a third round draft pick.  The Caps were 2-13-1-0 when the trade was made.

It hardly got better. The Caps struggled to score as teams loaded up on defending top goal-scorer Peter Bondra, whose goal scoring plummeted after the Caps traded center Adam Oates to the Philadelphia Flyers late in the season for goaltender Maxime Ouellet and three draft picks.  He finished with 32 goals, but no other Capital forward finished with as many as 20.  The team finished the year with just 27 wins and 66 points, finishing 27th in the league standings and getting a leg up on its rebuild with the fourth overall draft pick in the June entry draft.

The fourth overall draft pick could have been predicted given the club’s recent history.  In each of the previous four drafts, the first four under general manager George McPhee, the club’s first selection came from the Western Hockey League in Canadian junior (Jomar Cruz in 1998, Beech in 1999, Sutherby in 2000, and Nathan Paetsch in 2001).  With the first three picks going to Columbus (Rick Nash), Atlanta (Kari Lehtonen), and Florida (Jay Bouwmeester), the Caps had their pick from a variety of positions.  Joni Pitkanen and Ryan Whitney were available among defensemen.  Pierre-Marc Bouchard and Eric Nystrom were available among forwards.  The Caps, instead, once more went to the WHL well, taking Scottie Upshall from Kamloops in the WHL with the fourth overall pick (in reality, he went sixth to Nashville in that draft).

Having the fourth-overall draft pick in this draft instead of their own 12th overall pick they actually did have in that draft (Steve Eminger was selected), the Caps did not pull the trigger on the deal with the Dallas Stars on June 12th that netted them the 13th overall pick for a first (from Philadelphia in the Oates deal) and second round pick in this draft and a sixth rounder in 2003).  In other words, they did not pick Alexander Semin.  They kept their 26th overall pick and took Jarret Stoll (who was actually taken 36th overall by Edmonton).  In between, with the 17th overall pick (from Vancouver in the Linden trade), Washington selected Boyd Gordon (as they actually did in 2002).

The 2001-2002 season was a walk in the park compared to the 2002-2003 season, one in which the Caps got older and slid further in the standings.  They had a worse start than in the previous season, going winless in their first ten games, eight of those games played on the road.  They held their sell-off a year earlier than they did in real time, trading Peter Bondra to Anaheim (with a third round pick for the Mighty Ducks’ first rounder in 2003), Calle Johansson to Detroit (for a second round pick in the 2003 draft), and Michael Nylander to Ottawa (for a second round pick in the 2003 draft).

Having loaded up on second round draft picks in the 2003 entry draft the Caps, pushed to the third overall pick in the first round when Columbus won the draft lottery, selected Nikolai Zherdev, the top-ranked European skater in the Central Scouting amateur rankings (Columbus selected Nathan Horton with the first overall pick, while Carolina took Eric Staal with the next pick).  With the 28th overall pick obtained from Anaheim in the Bondra trade, the Caps took Corey Perry of the London Knights.

The Caps would finish out of the running for a playoff spot in the 2003-2004 season, although having bottomed out the season before, they would not win the 2004 draft lottery that would have enabled them to draft Alex Ovechkin first overall.  They would, however, have another top-ten pick, this time taking Alexandre Picard out of Lewiston in the QMJHL.

There would be no 2004-2005 season, the NHL going dark for the entire season due to a lockout.  It would make for an interesting 2005 draft, what with there being no standings-based lottery to hold and the fact that the prize amateur of this generation – Sidney Crosby – awaited.   The NHL devised a lottery that gave, in theory, all 30 teams a chance at the number one overall pick.  Each of the 30 teams would be granted three balls in the lottery barrel.  For each playoff appearance in 2002, 2003, and 2004, a team would lose a ball to a maximum of two.  The Caps, having missed the postseason in each of those seasons, did not lose a ball.  Then teams with the first overall pick in any of the previous four drafts – 2001, 2002, 2003, or 2004 – would lose a ball to a maximum of two.  The Caps did not have a first-overall pick in any of those drafts.  The Caps would go into that draft as one of five teams with three balls in the barrel – Buffalo, Columbus, Pittsburgh, and the New York Rangers being the others.

The Capitals, not having made the trade for Jaromir Jagr in 2001, fell on hard times quickly, more quickly than they did having made that trade.  In doing so, it accelerated their decision to implement a rebuild, although it would happen a bit more gradually than it would in real time.  In this scenario, the Caps do not get Alex Ovechkin or Mike Green, among others, and in their place get Scottie Upshall, Jarret Stoll, Boyd Gordon, Corey Perry, Nikolai Zherdev, and Alexandre Picard.  Given the uneven levels of performance over the careers of those players, it would be hard to see a way where the Caps would be able to replicate the success they had in the post-2004-2005 lockout.

Unless one of those three balls in the lottery barrel was picked in 2005.

Photo: Mitchell Layton/Getty Images
Posted by The Peerless at 12:00 AM No comments: