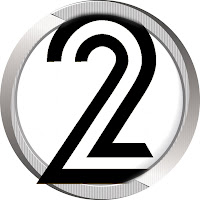 Head wear was the choice of fashion last night at Verizon Center as Mathieu Perreault recorded a hat trick in the Washington Capitals’ unexpected and unlikely 5-3 win over the Boston Bruins. It was a classic case of a player stepping up when adversity presented an opportunity. With Nicklas Backstrom and Mike Green out due to injury, and with Alex Ovechkin taking a seat in the first game of a three-game suspension, the Capitals looked as if they would be offense-challenged against a formidable opponent.

And early on it looked as if Boston would make good on the formidable part. Boston recorded the first seven shot attempts and the first five shots on goal. The Caps did not get their first shot on goal until the 6:49 mark. The shots were 9-2 almost 12 minutes into the period. But even though Boston would draw first blood on a goal by Rich Peverley with 2:14 left in the first period, the Caps had started to tilt the ice in the other direction. They finished the first period with more shot attempts than did the Bruins, 22-20, although they were on the short side in shots on goal, 12-10.

The hard work that ended the first period yielded dividends in the second period as twice within 41 seconds in the period’s third minute, the Caps scored on rushes. First it was Cody Eakin taking a pass from Joel Ward at the Boston blue line, then cutting between Steven Kampfer and Adam McQuaid to take the puck through the left win circle. He snapped the puck at goalie Tuukka Rask, who appeared to trap the puck between his right arm and body, but the puck trickled through. Rask then nudged the puck backward with his blocker so that it bounced over the line to tie the game.

Mathieu Perreault scored 41 seconds later when he worked a nice give-and-go with Alexander Semin, finishing the play with a quick snap shot past a lunging Tuukka Rask. After Tyler Seguin knotted things up again, Perreault took advantage of two mistakes by the Bruins in the neutral zone. First, Johnny Boychuk tried to throw a blind cross-ice pass with a teammate blocking his view. The pass made it only so far as Perreault’s stick. And as Perreault was starting to move the puck the other way, Zdeno Chara was caught backing up to the faceoff dot on the left wing, opening up the middle of the ice. Perreault jumped into the hole and used his speed to outrace Chara and Boychuk to the slot. Perreault had easy pickings on Rask with no defenders back to give the Caps a 3-2 barely lead two minutes after Seguin’s goal.

Brad Marchand tied it once more on a power play at 17:42 of the second period, the teams played back and forth through the first half of the last period. But Roman Hamrlik did a fine job of keeping the puck in the offensive zone in the period’s eighth minute. He fired on net, where Rask made the first save. But defensemen Dennis Seidenberg and Adam McQuaid lost Perreault in the noise, and Perreault was left all alone in front to swat in the rebound, and it was Les Chapeaux Perreault. Dennis Wideman added an empty netter with 27 seconds left, and the win was complete.

-- OK, it wasn’t Boston’s best effort. With rare exceptions, they looked as if they mailed it in after the first ten minutes. But give the Caps some credit. The line of Mathieu Perreault, Alexander Semin, and Marcus Johansson was 3-2-5, plus-6. Maybe that’s a second line when things settled down in a few weeks. Or maybe it’s a one-and-done thing. But it did look good last night.

-- The line of Cody Eakin, Jay Beagle, Joel Ward was 1-2-3, plus-2, and managed five shot attempts, which was not bad for a line that averaged less than 10 minutes of ice time per player.

-- Three goals off what were essentially cases of rushes coming off neutral zone pressure (Eakin, the first two by Perreault). Is this still in the Caps’ playbook?

-- The other side of that is that Boston’s defensemen, almost without exception, gave the Caps too much room entering the offensive zone, backing off and leaving themselves in poor position to defend or block shots.

-- Brad Marchand might be the “little ball of hate” (a nickname we though had already been taken), but the line of Brooks Laich, Troy Brouwer, and Matt Hendricks was sort of the “Line of Lumps.” They had only one point (an assist by Brouwer on the Wideman empty netter), but they managed 11 shot attempts, a combined nine hits, and four blocked shots. They earned their pay, although all of them were on for a Boston goal (Hendricks and Brouwer on the Seguin goal, Laich for the Marchand power play goal).

-- Territory continues to be a problem area. There were 25 faceoffs in the Boston offensive end (13 wins for the Caps), 11 in the Caps’ offensive end (four Caps wins).

-- You might expect that with Alex Ovechkin, Nicklas Backstrom, and Mike Green out, that the Caps’ power play would struggle. It did, even though they had only one. They had no shots on goal in their two minutes of man advantage.

-- Boston outshot the Caps 32-23, but five of the Bruin shots came from Dan Paille, tied for the team lead. We think the Caps will take that.

-- Eleven of the 32 Bruin shots came from defensemen. They generate a lot of activity from their blueliners. The Bruins had three assists from the defense (two for Dennis Seidenberg, one for Steven Kampfer).

-- Tomas Vokoun was not at his sharpest, but in fairness, the Bruins did do a pretty good job of breaking the Caps’ defense down in deep to give the Bruins advantages in numbers in close.

In the end, this was a good win. Few would have though the Caps could win this game, let along finish the night with five goals against a goalie with a goals-against average well south of 2.00 coming into this one. Mathieu Perreault, a player who recorded 93 goals in three years of Canadian juniors, has no doubt had hat tricks before. But he sure picked a good game to get his first hat trick in the NHL. He did it using the skills he has – speed and quickness, and a certain fearlessness to mingle with big bodies in close, despite his slight build. These are things he can contribute on a more regular basis. That is not to say he is suddenly going to be a hat trick machine, but with the Caps struggling and missing key parts, his contributions are going to be important. Last night we saw what those kinds of contributions can mean. 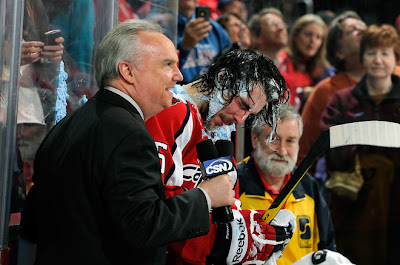 (Photo by Greg Fiume/Getty Images)
Posted by The Peerless at 6:56 AM 1 comment: