The Peerless Prognosticator is ON THE AIR!!! -- Home and Home: Capitals vs. Devils

It’s 11/11/11, the 100th anniversary of “The Great Blue Norther,” a weather event that left many cities in the midwest part of the United States experiencing record high temperatures and record low temperatures on the same day. It was a weekend on which many of those same cities experienced tornadoes on Saturday and blizzards on Sunday.

It seems sort of fitting then, that the Capitals, who started the month on a high with a record of 7-2-0 only to fall to 9-4-0, would face the New Jersey Devils in a home-and-home set on Friday and Saturday. On can hope that the Caps play with the whirling force of a tornado on Friday and blanket the Devils like a whiteout blizzard on Saturday. Here is what Caps and Devils bring to the ice this weekend… 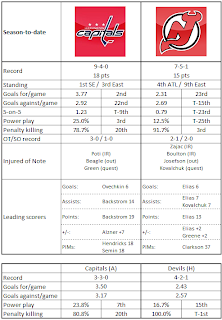 (click on pic for larger image)
It will be a tough chore for the Caps this weekend. New Jersey started slow, if you can call losing their season opener starting slow. Martin Brodeur gave up three goals on 29 shots in a 3-0 shutout loss to the Philadelphia Flyers and did little to shut up critics who were whispering since last season (if you think “whispering” is synonymous with “shouting”) that he was old, slow, and over the hill.

But the Devils rebounded with four wins in their next six games (4-1-1) and getting fine netminding from…Johan Hedberg? Yes, that Johan Hedberg, “The Moose” in the land of the Devil. Hedberg started Game 2 and won, 4-2. Then he came off the bench in Game 3 when Brodeur broke a hip...uh, injured a shoulder and won a 2-1 decision against Los Angeles. By the time Hedberg was done on his six-game run, he was 4-1-1, 1.86, .937, with one shutout.

And then he went “splat” in Phoenix (a 5-3 loss)…struggled in Dallas (a 3-1 loss)…and then went back to the bench in favor of Brodeur… who got lit up by Toronto for five goals on 23 shots in a 5-3 loss to the Maple Leafs. You might have thought the Devils would be a mess – unable to score goals (17 goals scored in their first ten games, a 4-5-1 record) and unable to stop them (20 goals allowed over six games). But you would be wrong. The Devils come into this game on a three-game winning streak – one goal wins all, but wins nonetheless.

1. Martin Brodeur comes into this game with a 2-2-0 record in five games, but among goaltenders qualifying on the NHL leader board, he is only 35th of 41 goalies in goals against average (3.00) and 38th of 41 goalies in save percentage.

2. New Jersey is tied with Anaheim for the most efficient penalty kill in the league at home. The Devils have killed off 26 of 26 penalties in seven games. It might have been a bit of luck early, as the Devils had a total of 19 shorthanded situations in their first four home games – five times having to kill off five or more disadvantages. But in their last three home games they have endured only a total of seven shorthanded situations.

4. Who is Adam Henrique? Well, he is a third round draft choice (2008) who started the season in Albany in the AHL. He was recalled on October 22nd, and he has made a case for sticking around. Despite having played in only ten games, he is fourth on the Devils in scoring (4-3-7), and he has spent a good deal of time centering Ilya Kovalchuk and Patrik Elias on the Devils’ top line. Folks in Caps Nation will be getting their first look at him this weekend.

5. Quick…who is the only New Jersey defenseman to have scored a goal this season? Henrik Tallinder?...nope. Andy Greene?...nope. Anton Volchenkov? Bryce Salvador?...nope and nope. It’s Mark Fayne. He has two. As a group the seven Devils’ defensemen appearing in games so far have a total of 15 points. Dennis Wideman has 11 on his own for the Caps.

3. Michal Neuvirth likes playing the Devils, or so it would seem. In four career games against New Jersey he is 4-0-0, 1.00, .970, with one shutout. He has stopped the last 50 shots he has seen against the Devils.

4. You could say that Alex Ovechkin has had trouble scoring against New Jersey. He has “only” nine goals in 22 career games against the Devils. But he has more assists (19) against New Jersey than he does against any team not in the Southeast Division.

5. The Caps have won four of the last five meetings against New Jersey, and the key has been…well, score. Their only loss was a 5-0 shutout (pitched by Johan Hedberg) on November 22, 2010. In the other four games the Caps outscored New Jersey, 19-4.

186 players have scored more goals so far this season than Ilya Kovalchuk. Heck, former Devil (and former Cap) David Steckel has more goals (three). In 119 games with New Jersey, the winger has a total of 43 goals – a 30-goal pace per 82 games. It’s not a bad pace, but it is probably not what the Devils envisioned when trading for Kovalchuk in February 2010. He has had success against Washington, though. In 48 career games against the Caps he has 24 goals. What he does not have, however, is a goal against the Caps while skating in a Devils uniform.

Brooks Laich is one of those players counted on for that “secondary scoring” teams covet. He could be one of those 20-goal players that can step up when the big guns go silent. He has averaged 21.5 goals per 82 games over the last four seasons. But he is on a pace to score only 13 goals, and he has only one goal since opening night. He does not have an even-strength goal yet this season (both tallies coming on power plays), one of only two Caps forwards having played in at least three games who doesn’t (Matt Hendricks is the other). Getting him going could go a long way toward getting the Caps out of their recent slumber.

1. Score first. Few things are more important in any single hockey game than getting the first goal (at the moment, only five teams have a below-.500 record when scoring first; only the Caps are above .500 when trailing first). But with New Jersey it has taken on more importance in the early going. The Devils are 3-0-1 when scoring the first goal, 4-5-0 when they don’t.

2. Make ‘em pay. New Jersey has the second worst time differential between power play time and penalty killing time in home games in the league. A lot of that is having killed off 26 of 26 power plays against at home. The Caps would like to turn that differential around – score on power plays and kill off the two-minutes when the Devils are a man up. A tall order…only one team has allowed fewer power play goals.

In the end, these aren’t your father’s New Jersey Devils. They are still a team that on offense plays it simple and straight, a low risk approach – with predictably modest results. But they no longer have the Martin Brodeur of old in goal, just an old Martin Brodeur. And while Johan Hedberg can be serviceable over limited stretches of games, he has allowed three or more goals in four of his last six appearances. The Devils are a team on which both goaltenders are older than the Caps’ franchise.

The Devils have been on the short side of some big nights against decent, if not elite offenses – Toronto scored five on them, Phoenix scored five, Pittsburgh (without Evgeni Malkin or Sidney Crosby) scored four. The Caps are a step up in weight class. The Caps need to play like it.