Washington Capitals -- That Was The Week That Was: Week 7

Marking time, treading water, standing in place.  Even with the ups (early in the week) and the downs (late in the week), it ended up being that kind of week for the Washington Capitals.  Here is how the week unfolded. 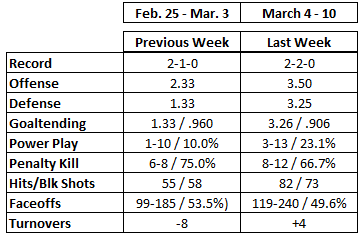 The Caps are slipping away by marking time. What started as a week with promise, by beating a quality opponent and beating up a division rival, ended dismally with a pair of losses to Atlantic Division teams, neither of which having faced the Caps as an unbeatable foe.

One can make too much of the 3.50 goals per game mark.  Half of the goals came in one game, that a 7-1 win over the hapless Florida Panthers.  They managed a combined three goals against a mediocre New York Islander team and against a back-up goaltender.  Even at the individual level, the unevenness was apparent.  Alex Ovechkin was 1-2-3, plus-3 against the Panthers, but had only one point and was a minus-4 in the other three games.  Mike Ribeiro was 1-2-3 against those Panthers and a plus-2, but he had just one point in the other three games and was a minus-4.

There is no crime in allowing three goals to the Boston Bruins, especially when you do it in the first period, then shut them out for the rest of regulation and overtime to steal a win.  And while holding Florida to one goal is no special achievement, given the state of injuries befalling that club, the Caps did what they had to do.  But nine goals in their last two games of the week to teams that are not among the elite goal-scoring clubs in the league, well, that’s a horse of a different color.  And it was not all goaltending.  Some of it was boneheaded decision making, either skating the wrong way when the puck was headed toward the Capitals’ net (Ovechkin) or yapping too much to put your team at a disadvantage (Ribeiro), to just plain being too thin on the blue line to mount much in the way of a sturdy defense.

Braden Holtby came back to earth a bit this week.  He played very well in the last 40:37 of regulation and overtime against Boston, turning away all 24 shots he faced.  And he was very good in stopping 25 of 26 shots against Florida.  But against a team that has brought out some of the best in him in his brief career - the New York Rangers - he was less than spectacular (very average, in fact) and was pulled for Michal Neuvirth after allowing 16 goals on 18 shots.  Neuvirth did not show as much rust as might have been expected for a goalie who had not seen a shot in anger in more than a month.  As for Philipp Grubauer, he got little support from his mates in giving up three goals on a whopping 19 shots in the third period of a 5-2 loss to the Islanders, two of those goals coming on 13 power play shots.

Both Ovechkin and Ribeiro took penalties that were critical in losses. Ribeiro added an unsportsmanlike conduct penalty to a minor for which he was already being sent to the penalty box (the Islanders scored on one of those power plays to take a lead they would not relinquish).  Ovechkin was fingered on two separate occasions on the same possession by the Rangers (scoring on the delayed penalty with the Rangers having an extra attacker).  Given that the Caps are just not a very good penalty killing team themselves, they cannot compound the problem by taking silly penalties.  They allowed at least one power play goal in three of the four games this week (you probably guessed they were perfect against Florida), and that makes 14 of 24 games in which they have allowed at least one such goal.  Their record in those games? 1-12-1, and the win came in overtime (this week’s 4-3 win over Boston).

A month ago the Caps ranked 20th and 11th in hits and blocked shots.  You can see that they are slipping.  And whatever one thinks of the accuracy of these particular measures, the Caps do not have the look of being a particularly difficult team to play against.

The Caps lost three of four games in the circle, but none of them overwhelmingly so.  If there was a weakness this week it was in the defensive end in which the Caps were a combined 34-for-74 (45.9 percent).  Mike Ribeiro had a particularly difficult week in the defensive end, going 2-for-9 (22.2 percent), and he did not take a single defensive zone draw against the Rangers.

The Caps had 30 giveaways at home.  If one couples that with the fact that the Caps had 15 takeaways in a single game this week (against Boston), then the plus-4 in turnovers does not look quite as good overall.

Last week’s performance ensured that this week is for the Caps’ season.  A loss to the Rangers was not unexpected, but the loss to the Islanders left the Caps further behind at the end of the week than they were at the start.  And then there is the uncomfortable fact confirmed this week.  The Caps can beat up on Southeast Division teams (6-2-0), but they struggle outside the friendly confines of the Southeast (4-11-1 against the Atlantic and Northeast Divisions).  They were 1-0-0 against the Southeast this week, 1-2-0 against the other three teams they faced from outside the division.  If that is the way it is going to be, the Caps need a lot more games against Southeast Division teams over the last half of the season.  Trouble is, of their last 24 games, only 10 are against those familiar foes, starting with the must-win home and home this week against Carolina.

Posted by The Peerless at 6:52 AM No comments:

Email ThisBlogThis!Share to TwitterShare to FacebookShare to Pinterest
Labels: 2012-2013 nhl season, that was the week that was, the peerless prognosticator, Washington Capitals
Newer Posts Older Posts Home
Subscribe to: Posts (Atom)