The Peerless Prognosticator is ON THE AIR!!! -- Game 11: Capitals at Hurricanes, November 4th

The Capitals go on the road again for a quick two-game tour, opening the trip tonight in Carolina to face the Hurricanes in the teams’ second meeting of the year. The teams met on opening night, the Caps winning that one when Mike Green scored 2:24 into overtime to give the Caps a 4-3 win.  Let's get right to the tale o' the tape... 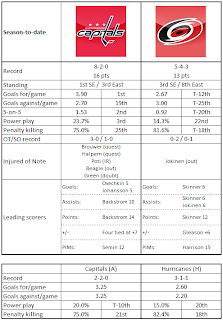 (click the pic for larger image)
This is what passes for a rivalry in the Southeast Division, and the Caps go into this edition with a 3-0-0 record against the Southeast, including their opening night win against Carolina.

1. It appears that Jeff Skinner’s rookie season was no fluke. He leads the team in most of the headline stats – goals, assists (tied), points, game-winning goals. But that’s offense. He also has been on the ice for 15 goals against (only one Cap forward has been on ice for 10 or more goals against – Brooks Laich, 11). He seems to like playing against the Southeast; he is 4-5-9, minus-1 in four games against the Southeast, 2-1-3, minus-5 in eight games against other divisions.

2. Carolina has allowed 36 goals this season. Eric Staal has been on the ice for 21 of them. His minus-12 is dead last among 670 skaters so far this season.

3. Only three teams in the league have had more power play opportunities than the Hurricanes. They are averaging 4.7 chances a game.

4. Carolina might not have high-end scoring from the blue line, but they do have balance. Six of seven defensemen have points this season (Justin Faulk is scoreless in three games).

5. Carolina does not take an inordinate amount of penalties (they rank 19th in minor penalties taken), but they tend to have them taken by defensemen. Three of the top four players in minors taken are defensemen. Perhaps something to watch for if it thins out the PK ranks on the blue line rotation.

3. Only five teams have had fewer power play opportunities than the Capitals. They are averaging 3.8 chances a game. But while they average almost a full chance per game less than Carolina, the Caps have scored more power play goals (nine to eight).

4. Nicklas Backstrom has been in a zone playing traffic cop on the power play. Eight of his 14 points and seven of his ten assists have come at the man advantage.

Everyone is going to have their eyes on Alex Ovechkin to see how he responds in his first game after “The Benching.” But the outcome of this game probably rides more on the play of Michal Neuvirth, who should get the call in the first half of the back-to-back games this weekend. He has not started a game since opening night, and his rust was evident in his relief appearance against Vancouver last weekend. He needs to get minutes, and Tomas Vokoun needs a break. He does not have much work against Carolina in his career – 2-1-0, 2.64, .911 in three appearances. However, he does have a shutout in Raleigh on that resume.

1. Empty the Box. Tonight’s Number… “4.” The Caps are 7-0-0 when allowing four or fewer power plays, 1-2-0 when they allow more than four. And the one win came in overtime against Pittsburgh. When you are an inefficient penalty killing team (the Caps are 25th in penalty killing at 75.0 percent), your effectiveness is determined by how many power plays you allow. Keep the penalty box empty.

2. Fill the Box. Cam Ward is a fine goaltender. He has played well against the Caps over his career, even if he’s been a victim of circumstance as far as wins and losses are concerned. Chances are there won’t be any soft goals given up. That means filling the space in front of his net, getting bodies below and inside the faceoff dots to break up his sight lines and occupy his attention.

3. Draw, podner. The Caps are 26th in the league in faceoffs. The ‘Canes are 25th, one tenth of one percent ahead of Washington. But Carolina is reasonably effective in situational faceoffs. Consider that Eric Staal is at 48.6 percent overall, but 53.8 percent in draws on the power play. He’s taken more power play draws than any other player for Carolina. Brandon Sutter is at 50.0 percent overall, but is 62.5 percent in shorthanded situations. He’s taken more shorthanded draws than any other player for Carolina. The Caps need to ramp up their game in the circle.

In the end, the Caps squeaked by in their last outing against an Anaheim team that wilted late in the fifth of a seven-game road trip. Carolina is fresh; they have not skated since Tuesday. The Caps have not really played a complete game since they dismantled the Detroit Red Wings almost two weeks ago. Their penalty killing as been poor (9-for-14), their power play has been weak (1-for-11), and it is perhaps the third line that has been the most consistent at both ends of the ice. The top line has to get more than just Nicklas Backstrom putting up points, and with Mike Green out the defense has to accelerate its partnership learning curve as the pairs are reconfigured. But with all that said, this game probably comes down to whether Neuvirth has any rust still lingering on his person.