The Peerless Prognosticator is ON THE AIR!!! -- Game 49: Capitals at Lightning, January 31st

The All Star Game is history. Goalie-Cam, Corey Perry’s stick, Patrick Kane’s Superman glasses and cape, white gloves… all put away. It is back to business, and for the Washington Capitals that means a 34-game sprint to the finish of the regular season that starts tonight in Tampa to face the Lightning. The Caps start the sprint from the pole position, first place in the Southeast Division by virtue of the fact that they actually win hockey games in the hockey portion of the hockey game. Despite their having the same number of standings points as the Florida Panthers, the Caps have 25 regulation and overtime wins to 19 such wins for the Panthers. That could be a big deal down the stretch, since it is the first tie-breaker if the teams finish the season tied in standings points at the top of the division.

But we get ahead of ourselves. Tonight the Caps visit Tampa Bay for the first time this season after winning the first two games of the season series in Washington. The left coast of Florida has been rather kind to the Caps, who are 10-2-0 against the Lightning in their last dozen regular season visits. They were 2-1-0 in their three visits last season. 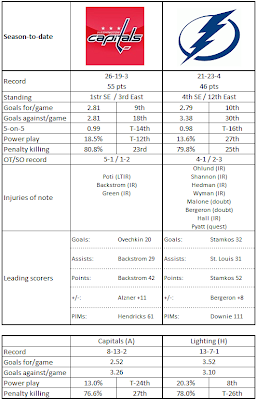 1. Even though there is a bright line separating the goaltending performance between the seven-game losing streak and the four-game winning streak in January, it hasn’t been a product of picking one goalie over another. In the seven-game losing streak, Dwayne Roloson was 0-2-1, 3.55, .870; while Mathieu Garon was 0-4-0, 5.36, .850. In the four-game winning streak, Garon is 3-0-0, 2.00, .926; while Roloson has won his only decision, allowing three goals on 33 shots. Roloson has the reputation as the Cap killer with an 8-6-5, 2.30, .916 record against Washington with four shutouts.

2. If Steven Stamkos is going to slow down in his goal scoring pace, he has given no signs of doing so yet. He has not gone consecutive games without a goal since December 21-23. In the 14 games since then he has 12 goals, and he is on a pace to be the only 50-goal scorer in the league (55). He has nine in 20 career regular season games against Washington.

4. Tampa Bay is the only team in the league to have allowed a total of at least 50 goals in each of the first, second, and third periods of games this season.

5. The Lightning lead the league in most losses by three of more goals (13). Only two teams have more losses by two goals. This is not a team that loses close.

1. For all the angst displayed by Caps fans this month over the team’s playoff chances, they are 5-2-1 since they laid an egg out on the two-game west coast trip. They have done it largely with defense, allowing an average of only 2.13 goals per game over those eight games.

3. As if you need reminding, with Nicklas Backstrom and Alex Ovechkin out, your top three scorers taking the ice tonight for the Caps will be Dennis Wideman (9-25-34), Alexander Semin (12-16-28), and Marcus Johansson (10-18-28). Tampa Bay will start three players with more than 40 points (Steven Stamkos, Martin St. Louis, and Vincent Lecavalier).

4. Michal Neuvirth would appear to be ticketed to baseball cap duty tonight, but he does have an odd career record against the Bolts. He has won both decisions in four appearances against Tampa Bay, but he has a GAA of 3.38 in doing it.

5. This is the first of a back-to-back set of games in Florida. The Caps are 3-2-0 in the opening game of back-to-backs so far this season.

Two years ago, Steve Downie had a breakout season. With 22 goals and 46 points in 79 games, he gave indications he could be more than just a pot-stirrer. Last season, however, he dropped to ten goals in 57 games. This season he has eight goals in 45 games (a 14-goal pace), but is a minus-18, worst on the team and 822nd among 828 skaters in the league. He has been a little more productive of late, going 1-3-4, plus-1 in his last four games. But someone has to take some pressure off the big-three of Stankos, St. Louis, and Lecavalier, and Downie might be someone to look for to do that, and not just be the guy with 111 penalty minutes in 45 games.

Part of being Mr. Versatility for the Caps is not just being able to skate in all situations, but being able to produce in them. And that brings us to goal-scoring. Brooks Laich has one goal in his last 15 games (34 shots on goal) and is on a pace to finish the season with 15 goals, a total that would be his lowest since the 2006-2007 season. He has eight in 43 career games against the Lightning, but the bigger picture here is that even if Nicklas Backstrom and Alex Ovechkin were in the lineup, the Caps need to get a bit more goal scoring from Mr. Versatility.

1. First 20. Any team coming off a long hiatus might be susceptible to a slow start in their first game back. The Caps are already a team that seems to have that problem, regardless of time between games. They are a minus-7 in the first period of games this season and have allowed the first goal 25 times in 48 games. The Caps are not in a position to let anyone get off to a fast start against them, given their struggles to mount offensive pressure in the last month.

In the end, maybe treating the first half as a bad dream and tonight as if they were 0-0-0 is the best way to go. The first half was disappointing to say the least, but the Caps have an opportunity to make things right in the last 34 games. On paper, they are still the class of the Southeast, but they played those first 48 games as if “on paper” was enough. Starting tonight, they have to toss that paper in the waste basket and tend to their business on the ice.