The Peerless Prognosticator is ON THE AIR!!! -- Game 5, Panthers at Capitals, October 18th

It’s Game 5 of the young season, and the Caps are in search of setting a franchise mark for consecutive wins to start a season. Only three Caps teams have won four in a row to start a season, including the 2011-2012 edition, but none have won one for the thumb (or the big toe) so to speak. Tonight, the Caps will try to set that record when they host the Florida Panthers, a team that has more new parts than an octogenarian at a joint replacement clinic. To wit…

And that doesn’t even include backup goaltender Jacob Markstrom, who spent last season (save for 40 minutes with the Panthers) in Rochester in the AHL. It makes one look at the Panther locker room as one big collection of new kids in school. And in that vein we took a look a the online how-to site “WikiHow” to get some advice on how to handle being the new kid in school and how this might have been translated to being the “new kids “in the Panther locker room…

1. Be confident. Walk with your head held high and don't slouch. If you look confident, everyone will think you're confident. That's why first impressions are so important.

Tough on goalies who are always dropping into that butterfly thing.

2. Get used to the school. This way you'll know where everything is. You also won't be embarrassed because you do not know where anything is.

New kid: "Hey...where's the playoff schedule?"
Old kid:  "This is Florida. We try to get outta here by April."

3. Pack a cold lunch on the first day. This way you will be able to get to the lunch room early and won't have to face the embarrassment of having no where to sit.

Cold lunch? It’s a hockey rink. Everything is cold.

4. Join in some after school activities. That way you will meet some friends that have the same interests as you. They may not go to the same school, but they're still friends, right?

New kid:  "Hey, anybody want to stick around and shoot some stick and puck a while?"
Old kid: "Hell-OH?  Florida?  Beaches?  Golf courses?  Women in bikinis?"

5. Introduce yourself to your new teachers. They will be glad that you can speak for yourself and will respect you for that. It may be hard for you but you do not have to do it in the middle of class!

“Hey coach, I’m Scottie…
“…Hey Scottie, I’m Mr. Dineen. Do you have any idea where the faculty lounge is here, I’m new.”

6. Try to look your best the first day of school. Wear your best outfit (not fancy), and do your hair nice and neat. Something like a plain shirt and jeans is fine. Remember, first impressions are important.

Shouldn’t have been a problem for Matt Bradley. Every day after the first day he’s likely to be sporting welts, bruises, or stitches from fights.  Just like a hockey player should.

7. Be confident. This is another first impression thing. People will respect you for being confident.

Sean: “Hey, any of you guys score nine goals in the playoffs last year?”
Matt: “Shut up.”

8. Be honest. If they asked you where you lived, don't lie, tell them the truth. Don't tell them you live at the White House.

9. Talk with the person who sits next to you. You'll make a friend you sit next to every day.

And so it is for the new kids in the locker room. They do get to show what they’ve got on the ice, though. However, what they’ve got isn’t much on offense. In three games heading into Monday’s game with Tampa Bay, no Panther has more than one goal, and none have more than three points. Only Jack Skille among the 18 skaters having dressed so far is in “plus” territory for the young season. Here is how the Panthers break down so far… 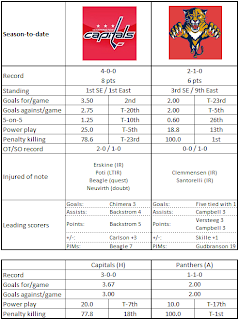 (click on pic for larger image)
Return of the Native(s)

For Tomas Fleischmann and Matt Bradley, it is a homecoming of sorts. Until he was traded to Colorado for Scott Hannan last December, the Caps were the only NHL team Fleischmann played for at the NHL level. Bradley spent six seasons in Washington, playing in 417 regular season and 37 playoff games with the Caps. Their starts with the Panthers have been very different. Fleischmann has a goal and an assist in three games, while Bradley is last among 18 skaters so far in average ice time, getting a few ticks fewer than eight minutes a game. Bradley does not yet have a penalty minute this season. Perhaps he is saving himself for this game – he had 47 fights as a Capital, many of which turned his face the shade of the Diggory Venn character in the Hardy novel “Return of the Native.” Here is your fun Matt Bradley fact: In his last game played against the Caps he recorded a Gordie Howe Hat Trick, with a goal, an assist, and a fight (against Jean-Luc Grand-Pierre, to give you an inkling of how long ago that was) in a 4-3 Pittsburgh win over the Caps in the finale of the 2003-2004 season, the last game before the lockout.

Only one player in the league averages more ice time than the 29:18 per game put up by Florida defenseman Brian Campbell thus far (the Rangers’ Dan Girardi), and none more than the 6:39 of power play ice time. But here’s the thing. He has one power play shot on goal in almost 20 minutes of power play ice time in three games. One would expect that number to change, especially since he has a career line of 20-99-119 on the power play over 629 career regular season games.  Just not in this game, we hope.

Through three games the Panthers are fourth in the league in net special teams time (power play time less penalty killing time). Not that it matters this early in the season; Columbus is second, and they are 29th in the league in points. But it has contributed to the Panthers being one of the more efficient defensive teams in the league thus far, allowing only two goals per game. And that, in turn, has allowed Jose Theodore to sit in the eighth spot among goals against leaders (1.97/game) and 11th in save percentage (.930, with Detroit’s Jimmy Howard). It is all part of a piece. Don’t give other teams opportunities, and you have enough experience in goal to make it count in low goals allowed results.

On the Other Hand

The Panthers have not yet mastered putting pucks into the opponent’s net this season. Six goals in three games, all scored by different players. Three of them have come on the power play. The Panthers have a total of three even strength goals on 74 shots, a 4.1 percent shooting percentage. Sean Bergenheim, Kris Versteeg, and Jack Skille are the only Panthers who have recorded more than ten shots on goal on the season. None of them have an even-strength goal, and only Versteeg has a goal of any kind.

The easy pick here might have been Matt Bradley for it being his first appearance in Washington since his well-publicized comments about the team in general and their nonchalance, and Alexander Semin and his capacity to care about results. But that is a side show. The bigger matter is Fleischmann. On this team, it would be fair to expect him to be, if not the leading goal scorer and point getter, than certainly among them. If Florida is to contend for a playoff spot, Fleischmann almost certainly has to post career numbers in those areas. For the record, his best season was in Washington in 2009-2010 in which he was 23-28-51, plus-9 in 69 games.

No, not to try and make Bradley eat his words (for which, it must be noted, Bradley has apologized), but because he has a productive history against the Panthers (14-16-30, plus-6 in 35 career games). More to the point, half of Semin’s goals against the Panthers have come on the power play, and if there is one thing the Caps still need to establish, it is their ability to dominate teams when they enjoy a man advantage.

1. Win the 5-on-5. Florida is not a good 5-on-5 team, particularly in terms of their ability to score goals. Three even strength goals in three games just is not going to get it done, and if the Panthers are held to this number in this game, it should end in the win column for the home team.

2. Be the Teacher. It appears at the moment that Jose Theodore, as the “hot goalie” for the Panthers, will get the nod on Monday night against Tampa Bay, meaning rookie Jacob Markstrom will make his first NHL start against the Caps in this one. Markstrom has a total of 40 minutes of NHL experience and will make his first start against one of the most formidable lineups in the league – on paper. The Caps need to provide an early lesson to the rookie and jump on him early.

3. No Fair Peeking. The Caps follow up this game with a game in Philadelphia on Thursday. That will be a much more meaningful game as a measuring stick than this one, all other things being equal, even if Florida is a division rival. And it would be natural to look ahead to that game. But if there is one reason the regular season “counts” it is in establishing good habits and not taking teams like Florida for granted. Not that they should. The Caps were 3-2-1 against the Panthers last season, although the Caps have probably the best player from that series for the Panthers now playing in goal for them in Tomas Vokoun.

This is the last game that the Caps should be a prohibitive favorite for a while. After this, the Caps get the Flyers, Red Wings, a spunky Edmonton team on the road, Vancouver, and Anaheim before their next divisional game against Carolina on November 4th. Getting off to a 5-0-0 start isn’t just a matter of setting a franchise record, but one of banking points against teams they should and have to beat. The Caps have played too many one-goal games in a row already, and Florida is the kind of team that will look to keep things close and low-scoring. The wild-card is Markstrom, if he gets the call in goal for Florida. And the Caps need to give him a rude awakening to the lessons that need to be learned by young goaltenders in the NHL.

In exchange for the New England Journal of Medicine's poster boy for the pathology of groin injuries, Semyon Varlamov, the Caps received from the Colorado Avalanche their first pick in the 2012 entry draft next June.  Many folks thought that pick might be a lottery pick.  So, from time to time we thought we would have a little fun with it and post the "Colorado Lottery Pick Meter" (Avs fans, it's all in fun, like photoshopping Ovechkin in a tutu or something).

The meter runs from "1" to "30," the lower the number being worse for the Caps, for it reflects the Avalanche's place in the league standings.  For example, this morning they are fourth, according to NHL.com, and that had Caps GM George McPhee in a somewhat foul expression... 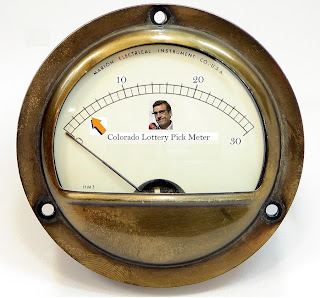 (click on pic for larger image)
Posted by The Peerless at 10:00 AM 2 comments: