These are NOT your old Tampa Bay Lightning 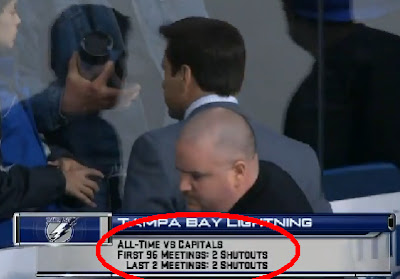 Posted by The Peerless at 7:20 AM No comments: 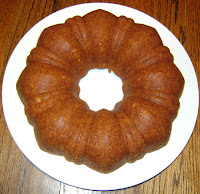 In any event, the Washington Capitals found out last night that the Tampa Bay Lightning are not the team they torched for 12 goals in the first two meetings of the season. After last night’s 3-0 whitewashing at the hands of the Lightning, the Caps are now 0-for-6 periods of hockey against the Lightning and goalie Jaroslav…oops, Dwayne Roloson.

Not that Hala…oops, Roloson got much work. The Caps managed only 23 shots on goal against him, five in the third period, when the Caps seemed to have felt the competitive portion of the game had passed. And if there is something more ominous for the Caps, it is this. In the last two games – two Lightning wins – Steven Stamkos did not register a point. Oh, there were appearances by old nemeses – Martin St. Louis had the overtime game winner in the meeting on January 4th, and Vincent Lecavalier had an assist last night. But there was Sean Bergenheim with a goal and an assist. Simon Gagne, who has not had an especially auspicious beginning to his Lightning career, getting the final goal last night. Guys like Dominic Moore, Nate Thompson, and Steve Downie getting on the score sheet.

Last night sent a message. The Caps are in a dogfight for the Southeast and now clearly looking up at their immediate competition.

-- Chippy game. Six roughing calls, a cross-check, a slash, a kneeing penalty. We’re going to get the impression these guys don’t like one another. Who knows, maybe we might have a real Southeast Division rivalry brewing here.

-- The record will show that Semyon Varlamov allowed three goals on 38 shots. A .921 save percentage isn’t bad, but if anyone in the Caps lineup deserved better, it was Varlamov. A goal that came not only off a tip-in attempt, but then ricocheted back onto the shooter’s stick (more on that in a moment) upon which the follow up pinballed off of several body parts as Varlamov tried to hold his position. The second goal coming off a baseball swing at the puck out of mid-air (more on that in a moment, too), and the last one coming on a 2-0 breakaway (yeah, more on that to come). Varlamov was otherwise, at times, brilliant. Absent some acrobatics on his part, the score might have been 8-0.

- Now, for the “more on that” moment. Did the defensemen make this trip? It was a Leonard Pinth Garnel film fest of bad defense by that group. Jeff Schultz might have had not only his worst game of the season, but his worst as a Cap. It is one thing to have your reach be a big part of your repertoire, but it can’t be the only thing in it. Especially when you are wandering far from the net. He was 25 feet from the net when Bergenheim whacked the puck out of mid-air for the second goal with only Tom Poti and David Steckel in the same zip code. And he was one of two defensemen left behind when Ggne slammed the door on the Caps’ chances for the evening on his breakaway. Oh, yeah…the other defenseman left behind on that break, Mike Green. He wasn’t awful, but he seemed to sleepwalk through long stretches of this game. And one shot attempt? None after a power play shot on goal 9:27 into the game. Knew it was going to be a bad night when he took a penalty 79 seconds into the game. And what was Tom Poti doing on the first goal? Try as he might, he could not tie up the stick of Dominic Moore, who got a second whack at the puck as he was about to circle around the net. You could say, “those things happen,” but when they do, bad things generally follow.

-- When the Caps are led in shots on goal by John Carlson, and Scott Hannan is right behind, chances are the Caps’ offense is going to struggle. The Caps had only 47 shot attempts.

-- If y’all are thinking “any day now” with respect to Alex Ovechkin breaking out, you might want to rethink that. Nothing captured his season so far than what happened as a 5-on-3 Tampa advantage was about to turn into a 5-on-4. Alex Ovechkin was leaving the box and tried to collect the puck that Boyd Gordon pitchforked out of the defensive zone. Ovechkin had to control the puck, allowing Steven Stamkos to get into the play, but Ovechkin could not separate himself from Stamkos (who frankly should have been whistled for slashing Ovechkin’s stick). Watching it, we were thinking that the explosiveness in Ovechkin’s game – at least in that instance – wasn’t there. And that has been a problem all season.

-- It says something about the night when the best Caps player not named “Varlamov” didn’t score, didn’t take a penalty, didn’t have a turnover, won more than he lost on faceoffs (barely), and turned his recent trend around and sent a lot of shots on net. That would be Nicklas Backstrom.

-- At least the kids weren’t on the ice for any goals. Karl Alzner and John Carlson are about anything any Caps fan could want out of a defensive pair, even on a night like this.

-- How the Caps defense could look so lethargic at even strength and do so well on the power play is one of those things that cause a fan to have that headache right behind the eyes that doesn’t go away. Six for six on the penalty kill, and they held the Lightning to eight shots.

-- Marty St. Louis had no shots on goal? No shot attempts? Wow…

-- There have been nights lately when Eric Fehr has been a force to be reckoned with. Tonight was not one of them. No shot attempts in 14 minutes and change.

In the end, we are getting to the time of year when folks are going to start thinking of matchups. At the moment, the Caps are in the 4-5 pairing with the Pittsburgh Penguins. At the moment, we would rather see that matchup than the one played last night. The Caps have shown an ability to come from behind on the Penguins. In Tampa Bay, the Caps seem to have found another of those teams that has a goaltender that can get into their heads. And do not sell the Lightning short. They are now two points out of first place in the East and only five behind Vancouver for the top spot in the league. You have to take them seriously going forward. They are not going away.

But still, last night sure did stink on toast if you were a Caps fan.
Posted by The Peerless at 7:04 AM 1 comment: