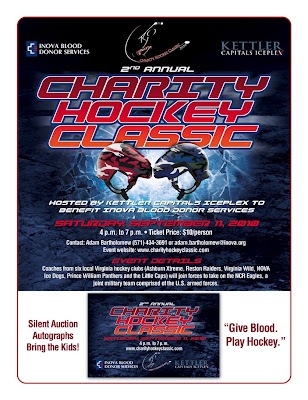 From the press release...

“Give Blood, Play Hockey” has long been an adage among the hockey community. This tradition will be on display in full force on Saturday, September 11, 2010, when the Virginia Coaching Cardinals take on the NCR Eagles in the second annual Charity Hockey Classic at Kettler Capitals IcePlex to benefit Inova Blood Donor Services.

Comprised of coaches from youth hockey clubs including the Ashburn Xtreme, Reston Raiders, Virginia Wild, NoVA Ice Dogs, Prince William Panthers and Washington Little Caps, The Virginia Coaching Cardinals will face the NCR Eagles, a joint military hockey team consisting of players from the Army, Navy, Air Force, Coast Guard and Marines, in what promises to be a thrilling exhibition game. The beneficiary will be Inova Blood Donor Services, a service line to the not-for-profit Inova Health System that collects, tests and provides blood and blood products each day to 15 hospitals and medical centers throughout the Washington, D.C. metro area.

Last year‟s inaugural event saw coaches from the Ashburn Xtreme defeat their counterparts from the Reston Raiders before a raucous crowd of supporters from both clubs by a score of 7-1. More importantly, the event raised over $40,000 for a new Inova bloodmobile, easily exceeding the initial goal of $25,000. The second annual Charity Hockey Classic will unite the rival hockey clubs and other clubs from Northern Virginia against their U.S. armed forces opponents in an effort to raise funds for a new value-added testing (VAT) machine, an instrument that provides free screening to donors for diabetes, cholesterol, and heart disease. The bar has been raised this year to $40,000, with each player from the respective teams challenged with generating $1,000 to help secure their spot on the team.

Taking place for the first time at Kettler Capitals IcePlex in Arlington, VA – home of the Washington Capitals – rink time has been donated for the event, which will run from 4:00 until 7:00pm. In addition to the main attraction, other activities throughout the afternoon will include a silent auction, appearances by local celebrities including Washington Capitals players, and „Mites on Ice‟ youth hockey exhibitions.

“We are excited to build upon the successes of last year‟s event, especially with this year‟s new military focus,” said Charity Hockey Classic chairman Adam Bartholomew. “Seeing the entire hockey community continue to rally around such a worthy cause as blood donation makes me very proud to be a hockey player.”

Inova Blood Donor Services, a 501(c)(3) organization headquartered in Sterling, VA, also maintains its strong ties to the hockey community as the Official Blood Collection Agency of the Washington Capitals.

“Our donors save lives every day in our community. This is our chance to return the favor,” said Terri Craddock, Director of Inova Blood Donor Services.

For sponsorships, tickets or additional information, please contact Adam Bartholomew at Adam.Bartholomew@inova.org or visit http://www.charityhockeyclassic.com/.
Posted by The Peerless at 7:16 AM No comments: