“There are no shortcuts in evolution.“

What made Tom Wilson the outlier in that group of frequent fighters is that Prust was a third round draft pick (70th overall in 2004), Dorsett was a seventh round pick (189th overall in 2006), and McLeod was an undrafted free agent.  Wilson, as Caps fans know, was a first round pick in the 2012 draft, taken 16th overall, ahead of such players as Tomas Hertl, Teuvo Teravainen, and Tanner Pearson, who combined have a penalty minute total in their careers (108 in 461 games) that is less than a fourth of the total recorded by Wilson through this past season (486 in 231 games) but who have 96 combined career goals scored to 14 for Wilson.

Which brings us to this season.

After two seasons learning his craft in the NHL it would not be a stretch to think Wilson would occupy the right side of the third line, especially since the Caps secured the services of T.J. Oshie and Justin Williams in the offseason to provide right-side scoring punch on the top two lines.  Surely he would be getting more than the nine and a half minutes a game he averaged over his first two seasons.  And with the increased ice time, one might have expected his offensive numbers to improve as well, perhaps putting the feisty phase of his early career to, if not rest, than at least dormancy.

His ice time showed progress, too.  He averaged 7:56 per game in his rookie season, followed by 10:56 last season.  This season he averaged 12:55 per game.  Almost all of the increase was a product of the added responsibility of penalty killing, for which he averaged 1:35 a game after getting a total of 49 seconds of shorthanded ice time over his first two seasons.  He was fourth among forwards finishing the season with the Caps in average shorthanded ice time per game. 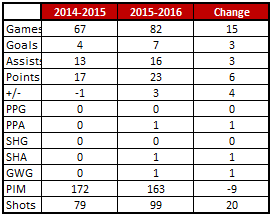 Odd Wilson Fact… Only two players in the NHL have at least 50 points and at least 400 minutes in penalties over the last three seasons – Antoine Roussel and Tom Wilson.  Wilson did it in more than 900 fewer minutes (3,350 minutes for Roussel, 2,443 for Wilson).

Winning in Nashville has not been the easiest thing for the Caps to do.  In 11 games in the history of the series coming into this season, the Caps were 4-5-2 (including one tie) in Tennessee, including losses in each of their last three visits.  The Caps got off to a good start against the Predators in their February contest, though, due in no small part to Tom Wilson.  It was Wilson with just over 12 minutes gone in the contest setting up Jason Chimera for the game’s first goal, getting a passing angle around Roman Josi at the right wing boards, then threading a pass to Chimera at the far post to slip the puck past goalie Pekka Rinne.  With the clock approaching the five-minute mark of the second period Wilson did his best imitation of Alex Ovechkin.  With Marcus Johansson skating down the right wing side, Wilson set up in the left wing faceoff circle.  A cross-ice pass from Johansson was turned into a one-timer that beat Rinne to make it 2-0.  The Caps went on to win the game, 5-3, their first win in Nashville since December 2013.  For Wilson, it was one of four two-point games on the season, but he also added three hits and won two of three faceoffs while going plus-2 in 15:55 of playing time, his fourth-most ice time total on the road all season.

When the other guys score a goal ten seconds into your first shift, 44 seconds into the game, it’s not likely to be a good night.  The trouble for Tom Wilson was, it got worse.  Pittsburgh scored again, a shorthanded goal 28 seconds into the second period, to make it 2-0.  Then, two minutes later, Wilson was on the ice for this…

Five minute major for boarding.  He had three more shifts after that and eight for the game.  The eight shifts and 5:50 in ice time both were season lows.  And, in a game in which the Caps would end up coming from out of an 0-3 hole to tie the game (only to lose in overtime, 4-3), Wilson would have no other marks on his score sheet – no hits (the boarding notwithstanding), no blocked shots, no takeaways, no shot attempts.

Tell us if you’ve read this before… the Caps didn’t get much from their bottom nine in the postseason, especially against the Pittsburgh Penguins in the second round.  Tom Wilson certainly was not immune from that plague.  He went his first nine games of the postseason without a point and recorded a total of eight shots on goal in 12 games.  Only two of those shots on goal came in six games against Pittsburgh in the second round.  It was not necessarily for a lack of ice time; he averaged just over 12 minutes per game (12:55 in the regular season).  Let us hope this was a learning experience.

Tom Wilson is a 16th overall draft pick, and frankly, his numbers look like a 16th overall draft pick.  In his 2012 draft class he ranks 16th in goals, 12th in assists, 12th in points, tied for 13th in plus-minus.  On the other hand, he’s done that while ranking fifth in games played, so it is also reasonable to say that he has underperformed his selection slot on a production per game basis.  On the other hand (three hands?), Wilson celebrated his 22nd birthday in late March.  He is still a developing player.

And it is not just development as an offensive player or as a defensive specialist that Caps fans are witnessing with Wilson.  He is in the midst of an evolution from being a player whose mark is made with mayhem and playing a bit outside the rules to one of being productive in ways much friendlier to the rule book.  It is not the comparatively easier process of just getting better in one facet of the game.  It is a matter of style and diversity of skill.  It is not likely to be either easy or quick.  But as Justice Brandeis said, “there are no shortcuts in evolution.“