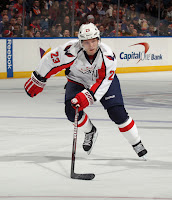 (click pic for larger image)
OK, so you are a 5’8”, 171 forward who over the past three seasons with the organization played 12, nine, then one game in the NHL. You have a total of eight goals in 75 career NHL games for two clubs scattered over six seasons. And, you are about to turn 33 years old. You might resign yourself to the conclusion that the NHL is out of your reach.

All this time what he was not doing was packing his bags for a recall to Washington. By the time he was recording his 59th assist for the Bears, his teammate Cody Eakin had been called up – several times, in fact – and had played in 29 games for the Caps (when he wasn’t putting miles on his car between Hershey and Washington). Eakin was the up-and-comer. Aucoin was, well, the AHLer.

However, by the beginning of February Eakin had skated more than 10 minutes in a game only three times in his last 14 games, clearly not enough work for a prospect. He was returned to Hershey, and Aucoin finally got his call. He would not play another game in Hershey in 2012. Red Sullivan’s record would remain safe.

Aucoin did not exactly light things up upon joining the big club. He was getting Eakin minutes – a little less than ten a game in his first seven games. Predictably, he did not record a point in any of them. But he did have a two-point night in his eighth game, a goal and an assist against Toronto on February 25th. It kicked off quite a week for him. He and his wife celebrated the birth of a “leap baby” on the 29th. Then, on March 2nd, he was promoted to the top line, centering Alex Ovechkin against the New Jersey Devils. That one didn’t turn out so well – the Caps were smacked around early and often in a 5-0 loss, Aucoin finishing without a point and a minus-2.

It would be easy to dismiss Aucoin’s season as inconsequential, but the fact is that with 11 points in 27 games, he was on a pace to match Troy Brouwer’s 33 points in 82 games. His three goals was a “Matt Hendricks” pace of nine for the season, his eight assists on a pace (24) right behind Brooks Laich (25). His plus-4 in 27 games equaled that of Jason Chimera in 82 contests and was a pace equal to that of team-leader Joel Ward (plus-12). He struggled on faceoffs (47.1 percent), but so did Brooks Laich (47.6 percent) and Marcus Johansson (43.2 percent), the team leaders in total draws taken.

As far as the underlying numbers are concerned, it is hard to draw conclusions based on the combination of games played and minutes skated. For example, he skated almost 200 fewer total minutes the regular season than did Jay Beagle, and Beagle skated almost 300 fewer minutes than did Mathieu Perreault, who played in only 64 games. That provides the grain of salt one might take while pondering, say, a PDO value of 1043, best among Capitals forwards having played in at least 20 games (numbers from behindthenet.ca). By way of comparison, Cody Eakin (30 games played) has a PDO value at 5-on-5 that is up there, too, tied with Joel Ward for second best among forwards (1027). In Aucoin’s case, there is the outsized shooting percentage on ice (11.11 percent) contributing to the PDO. As a team the Caps shot to a 9.50 percent rate (all situations).

Game to Remember… March 19, 2012. The Caps abused goaltender Jimmy Howard to the tune of three goals in less than 15 minutes of the first period on their way to a 3-0 lead at the first intermission of their game in Detroit against the Red Wings. The Red Wings got one back early in the second period on a power play goal by Kyle Quincey. With the period winding down, Alexander Semin found himself in the corner to the right of Howard. He flicked the puck toward the net, but Danny Cleary got a piece of it, and the puck fluttered to the ice. Aucoin jumped past Quincey at top of the crease, collected the puck, curled around to get a shooting angle, and wristed the puck over Howard’s glove to restore the Caps’ three-goal lead. A good thing, too, because the Wings made it close in the third with goals by Todd Bertuzzi and Cleary. An empty net goal by Jason Chimera sealed the 5-3 win, but it was Aucoin’s marker that would be the game-winning goal, his first in the NHL.

Game to Forget… March 6, 2012. After that promotion to the second line on March 2nd, Aucoin was returned to a spot on the fourth line with Joel Ward and Jeff Halpern for this game against the Carolina Hurricanes. It was not without its moments – or rather, moment – for Aucoin. He skated only three shifts in the first period but recorded an assist on his third shift, getting credit for a helper on a Troy Brouwer goal (frankly, it was pretty much all Brouwer, who carried the puck down the wing, flung it on net, followed up his own shot, carried around the net to the other side, and backhanded a shot past goalie Cam Ward). But that would pretty much be it for Aucoin. He skated only four more shifts in that game, and in a contest in which the Caps had 49 shots on goal, Aucoin had…wait for it… none of them. The Caps lost, 4-3.

Post Season… The jump in competitive weight class appeared to be a bit much for Aucoin to navigate in what was his first appearance in an NHL post-season. In 14 games he managed only two assists and averaged just over ten minutes of ice time per game. The best one might say is that both of his points came in Caps wins.

In the end… Stars give the game its luster, but guys like Aucoin give it depth. Since graduating out of the Norwich University program in 2001, Aucoin has played for an ECHL team, a CHL team, a UHL team, five AHL teams, the Carolina Hurricanes, and the Caps. The term “journeyman” applies here. But so does the term “perseverance.” Aucoin has played 889 regular season and playoff games in just about every league imaginable over the past 11 years. That he played only 116 of them in the NHL might say something about the likelihood of a permanent place in that league, but it also says something about the player’s will to pursue that objective.