One wonders, indeed. The Washington Capitals have players on their roster who are not strangers to winning. Once upon a time, Mike Green and Brooks Laich were members of a Calder Cup champion in Hershey that endured a Game 7 in the semi-finals played against a Portland Pirates team that loaded up on ringers – Ryan Getzlaf and Corey Perry, who each played more than 50 games in Anaheim in 2005-2006, as well as Dustin Penner, who had another 19 games with the Ducks that season – and had Bobby Ryan, a second overall draft pick and future 30-goal scorer in the NHL.

The Caps have John Carlson and Karl Alzner, veterans of a Calder Cup team in Hershey that came back from 0-2 down in the Finals against Texas in 2010 to win going away in the next four games. And there is Michal Neuvirth, a goalie who won two straight Calder Cups and in doing so not only defeated the likes of Vancouver’s Cory Schneider (in the 2009 Calder Finals) and Los Angeles’ Jonathan Bernier (in the 2010 Calder semis), but improbably authored shutouts in Games 6 and 7 in the second round of the 2009 playoffs against perhaps Hershey’s most hated rival, the Wilkes-Barre/Scranton Penguins.

And no doubt there are examples of winning among other players on this Capitals roster. Just not in Washington.

And as the Caps find themselves holding onto their own playoff destiny this season by the flimsiest of grips, it begs the question of “why?” Why does one read, after Game 80 of the regular season, such quotes as these from players after last night’s 4-2 loss to the Tampa Bay Lightning?...

"We obviously let off the gas, and there was a lot of bad turnovers and sloppy play. That’s the sign of a team that, in my opinion, thinks they had it a little bit too good. It was a big-time error by us. We never should’ve had that game be where it was."


"We didn’t come out the way we needed to and took it for granted that it was a team that wasn’t in the playoffs and we had a chance to make [the postseason]. We got a little pressure off ourselves from being out of the playoffs to in the playoffs by just having Buffalo lose. With Florida only a few points [away], you start to think about all these things, ‘We win this tonight we’re in third place’ and you get ahead of yourself. We just didn’t come out and pound them like we should have."


"Missed assignments a bit and it ends up in your net. When you’ve got guys like Stamkos on the ice, you’ve got to be extra careful. We battled back, but it’s not good enough."

If there was a “Stanley Cup” for quotes, the Caps would have as storied a history as the Montreal Canadiens. How can a team that has any serious aspirations for a championship at this level be saying the same things in April that they were saying in November? Talk of bad turnovers, sloppy play, missed assignments. This isn’t the shakedown cruise for the team that early games in the season can be. This is the fight for their playoff lives.

How is it that the same players who have shown an ability to meet adversity and beat it at one level seem thoroughly unprepared or unable to do the same at this level? Put in starker terms, what is the difference between Hershey and Washington? Maybe it is the difference between an organization in which winning is not so much expected (it is) as demanded and one where… well, where it isn’t. There appear to be two entirely different cultures two hours apart, and one wonders if the traits inculcated in one appear, with time, to fade away in the other.

Some of these guys need to find their inner “Hershey” and right quick. Or it is going to be just another “Washington” sort of spring in these parts.
Posted by The Peerless at 9:57 AM 3 comments: 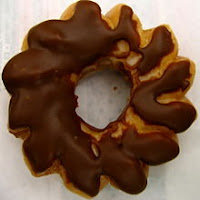 You knew they would not make it easy on themselves.

The Washington Capitals took a lead, lost it in the blink of an eye, teased their fans one more time with a late tying goal, then gave up a pair in the last 63 seconds off the stick of Steven Stamkos to lose to the Tampa Bay Lightning, 4-2, last night in Tampa.

It was there for the taking. A team playing out the string, starting a goaltender who had allowed ten goals on the last 71 shots he faced over two games, and the Caps themselves with an opportunity to turn the heat up on the two teams directly in front of them – the Florida Panthers and Ottawa Senators. After a scoreless first period, it appeared as though the Caps might do just that, take charge of their destiny, when Alexander Semin rifled a slap shot past Lightning goalie Dwayne Roloson moments after hitting a post with an open net in front of him.

Five minutes later, the lead was a memory. Teddy Purcell scored on a power play by taking a page from the Alex Ovechkin songbook. Purcell was lurking along the left wing wall as the Lightning zipped passes back and forth to pull the Caps defenders out of their penalty killing box. When the puck found its way to Steven Stamkos’ stick on the right side, Purcell stepped out from the wall, and Stamkos found him through a clot of players in the left wing faceoff circle. Purcell snapped the puck through goalie Michal Neuvirth’s pads to tie the game.

Victor Hedman gave the Lightning a lead at the end of a play that seemed all too typical of the Caps’ season. Nate Thompson outdueled Roman Hamrlik for the puck in the left wing corner, then moved it out to the point to Hedman. The defenseman fired a shot at the Capitals’ net, and with Tom Pyatt getting position on defenseman Mike Green to set a screen, Neuvirth never saw the puck until after it hit a pad and trickled in to give Tampa Bay the lead.

Jason Chimera solved Roloson to tie the game with less than four minutes left in regulation when Roloson could not control a shot from the right win faceoff circle by Alexander Semin. The shot bled through to the other side of the net, where Chimera was lurking. He backhanded the puck into the open net, and the game was tied, giving Caps fans hope of at least one standings point coming out of this.

That hope was dashed as the clock wound down to a minute to play. Brian Lee and Brett Clark worked the puck at the top of the offensive zone while the other Lightning packed themselves in on Michal Neuvirth. Clark let fly, and Neuvirth made a pad save. But Steven Stamkos was open for the rebound, and he quickly stuffed it in to give the Lightning the lead one last time. Stamkos added an empty net goal with two seconds left, and the Caps found themselves where they started the evening – in eighth place trying to fight off the Buffalo Sabres.

-- A team fighting for its playoff life should not get outworked by a team writing in its tee times in pen, but that’s what happened on the Hedman goal and on the first Stamkos goal. The Caps were outworked for the puck, outworked for position.

-- 12 of 18 Caps skaters were on ice for Lightning goals, Dennis Wideman and Troy Brouwer on for three of them.

-- One could give Dwayne Roloson a lot of credit for this win for the Lightning. Certainly the folks awarding the game’s three stars did (he was first star). But the Caps didn’t exactly make things hard on him for long stretches of this game, taking shots from long range and getting no traffic in front of him.  Still, it was a fitting way for Roloson to wind up in what could be the last time he faces the Caps.

-- Sixty seconds of a season… Stamkos gives the Lightning the lead on his rebound goal with 63 seconds left. Alex Ovechkin has a chance to tie it up with a deftly tipped puck from the low slot with nine seconds left. Roloson makes the save. The puck goes the other way; Stamkos fights through a check along the wall by Wideman, scores the empty netter. Stamkos 2 – Ovechkin 0.

-- It was, to be charitable, an interesting game officiated by Kelly Sutherland and Frederick L’Ecuyer. It was reminiscent of the pre-lockout sort of games when impedance fouls were rarely called.

-- First game back from a long absence, a player might get by on adrenaline. Second game back, the rust might show a little more clearly. It did for Nicklas Backstrom last night. He was not bad, but neither was he sharp. All of that is reasonable to expect. But the third time will have to be the charm on Thursday when the Caps play for what could be their season against Florida.

-- In a losing effort, congratulations are still in order for Jason Chimera, who reached the 20-goal mark for the first time in his career. His previous career high was 17 goals in the 2005-2006 season in Columbus.

-- Brooks Laich is really sputtering on faceoffs. Last night it was 1-for-4 in the offensive zone, 1-for-7 in the defensive zone. On the other hand, boy, did he take one for the team right in the boot. It looked grim the way he went off, but make it back he did.

-- I must have missed the changeover when Vincent Lecavalier became a role player. He looks old and out of place out there. He did little things well, but are his days as someone you game-planned for over?

-- On a per-minute basis, Mike Knuble was a shooting machine out there. Seven shot attempts (two on goal) in just over ten minutes of ice time.

In the end, while it was Stamkos being clutch late, this game was likely decided on a sequence late in the second period with the Caps nursing a 1-0 lead. Alex Ovechkin muscled in against a Tampa defender and got of a shot in deep that Roloson shrugged away. Ovechkin followed the play, and the puck came to his stick again along the left wing wall. He circled out and appeared ready to send off a wrist shot from the left wing faceoff dot. But he spied Mike Green pinching in from the weak side and sent the puck across. Green had only to finish the play to put the Caps up 2-0 and change the complexion of the game. Green fired, Roloson got across and gloved the puck down.

Less than two minutes later, Tampa scored two goals. Instead of a 2-0 lead at the second intermission – Washington came into the game 23-0-1 when leading after two periods – Tampa led, 2-1. Washington, while among the better teams in winning games after trailing at the second intermission, still had won only seven games all season is such situations. There is no wonder Mike Green swung his stick at the glass in frustration after failing to convert. Then again, it was all too typical of the Caps’ season – an inability to cash in when the goods were there for the taking.
Posted by The Peerless at 6:36 AM No comments: