The Peerless Prognosticator is ON THE AIR!!! -- Game 19: Capitals at Avalanche, November 20th

The Washington Capitals hope to wrap up their three-game road trip in a winning fashion and with a winning record as they visit the Colorado Avalanche in Denver on Thursday night.

The Caps are coming off a 2-1 overtime win against the Arizona Coyotes, the second time this season they won a game when scoring two or fewer goals (the other being a 2-1 Gimmick win over the Florida Panthers on October 18th).  After going 0-25-7 last year in games in which they scored two or fewer goals (including shootouts), the Caps are 2-5-1 in such games this season.

As for the Avalanche, they come into this contest having a difficult month of November.  In eight games so far this month, Colorado is 3-4-1, although they have won their last two games – a 4-3 trick shot win over the Rangers and a 3-2 win in New Jersey – to complete a 2-2-0 road trip.

On offense, the Avs seem stuck on “3.”  That would be the number of goals they scored in four of their last five contests, part of the 18 they have in eight games this month.  They have yet to score more than three goals in any of those eight games of November.

If we asked you who was leading the Avalanche in scoring in November, you might be inclined to answer Nathan MacKinnon or Gabriel Landeskog or Ryan O’Reilly.  We doubt that the name “Tyson Barrie” would have occurred to you, but that would be the correct answer.  Barrie’s six points for the month (all assists) has vaulted him into a tie for the team lead in points (13) with Matt Duchene.  Barrie is probably not well known to Caps fans, but his performance is not particularly surprising.  Last year, his third in the NHL, he finished 13-25-38 to finish one point shy of Erik Johnson for the team scoring lead among defensemen.

Up front, the precociousness of youth remains on display for Colorado.  Their own version of the “Young Guns” – Duchene, O’Reilly, Landeskog, and MacKinnon – are all 23 years of age or younger.  They also account for 17 of the 45 goals scored by the Avs through 19 games and six of the 18 scored by the club in November.  As a group they are 3-8-11 against the Caps over their respective careers, O’Reilly the only one not to have yet recorded a career goal against Washington.

In goal, the Caps seem unlikely to see their old friend, Semyon Varlamov.  His season has had its issues with consistency, perhaps due to distractions, perhaps due injury problems of the sort that plagued him in Washington and that will keep him out of this game.

1.  There have been 706 skaters dressing for at least one game this season in the NHL. Defenseman Nick Holden is dead last among that group in plus-minus (minus-15).  It not as if he has been much better in terms of possession.  Only six players have a worse Corsi plus-minus than Holden (minus-117).  Among 437 players with more than 200 minutes of ice time, he has the tenth worst Corsi-for percentage at 5-on-5 (37.94).

2.  Colorado is really struggling with the second period.  They are minus-2 in the first and plus-1 in the third periods of games, but they are a whopping minus-10 in the middle period.  That is the second worst second period goal differential in the league (Buffalo is minus-11).

4.  If Colorado has a strength, it is one that matches the Caps’ strength.  The Avalanche are fifth in the league in penalty killing (88.2 percent), but they are even better at home.  They have allowed only two power play goals at home this season.  No team has allowed fewer on home ice, and only Detroit has a better penalty killing rate at home (94.4 percent) than Colorado (93.8 percent).  It will be a challenge for the Capitals’ power play. 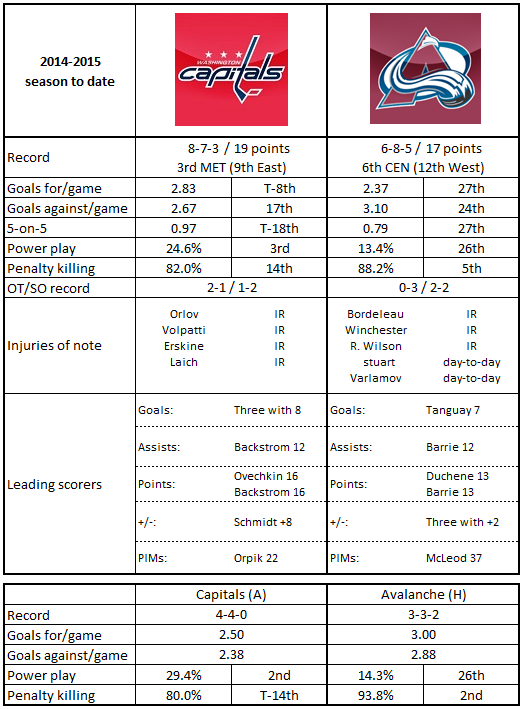 2.  Following on that first fact, the Caps have the fourth worst goal differential in the third periods of games (minus-7), undoing much of their earlier work (plus-5 in the first period, plus four in the second period).

3.  Washington’s ability to hold opponent shot totals down (26.8 per game) is the reason that they have the sixth best shot differential in the league (plus 3.3 per game).  Last season they were 27th (minus-4.1)

4.  Even with all the shot suppression, the Caps are just tied for 18th in goals allowed at 5-on-5.

5.  Alex Ovechkin and Nicklas Backstrom have not had a “plus” game since November 2nd (seven game streak).  Even with that, the Caps are 4-2-1 in those games.

For all the youth available to the Avalanche, it is the old man, Alex Tanguay, who leads the club in goals scored (7).  Tanguay spent his first six seasons in Colorado before heading off to Calgary, Montreal, Tampa Bay, and Calgary again before landing in Colorado once more in 2013-2014.  Now in his 15th NHL season, Tanguay is closing in on 1,000 games played (957) and 800 points (784).  He has been hot lately, going 3-2-5 in his last six games, even if he doesn’t shoot all that much (ten shots on goal in those games, half of them against Toronto on November 6th).  He is 4-5-9 in 17 career games against the Capitals.

Jason Chimera earned an assist in the Caps’ 2-1 overtime win over Arizona on Tuesday when he set up Jay Beagle for the Caps’ first goal.  It broke a seven-game streak without a point.  He is still working on a 13-game streak without a goal and has only one this season.  He has not been immune to slow starts.  Last season he started the year with one goal in his first nine games and finished with 15.  Two years ago he went the first 27 games of the season without a goal and finished with three.  So, it might be hard to ascertain whether he is victim of a slow start, or he is in what might be a painful season-long rut.  His shooting percentage has been an issue in terms of its consistency.  He has never been an especially efficient shooter (only twice in 11 previous full seasons has he finished over 10 percent; career: 8.7 percent), but his 4.8 percent is something to notice.  He is 6-8-14 in 28 career games against Colorado.

This is not last year’s Colorado team.  Except for their penalty kill, this is a team that ranks in the bottom third of just about every other meaningful statistic, fancy or not.  They do come into this game on a mini-winning streak, having won their last two contests.  However, they are struggling to score, and their number one goaltender has a wonky groin.  However, this is also a team that skated rings around the Caps last season, and Washington has found its own difficulty in scoring in the thin air of Denver with one goal in each of their last two visits there, both of them losses.  Things are different this time though, the Caps have a new coach and a new approach, the Avs are paying for what seemed like a deal with the Devil last season.  You know how this will turn out…