There's something about August.... 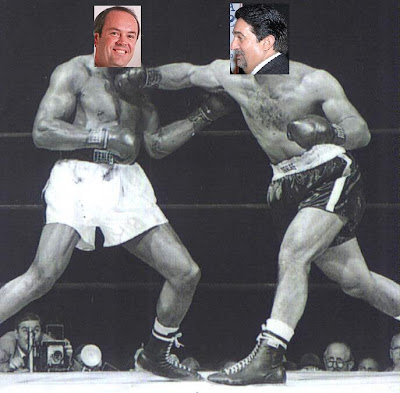 ...that makes you think it's January, and a couple of heavyweights are duking it out at center ice. Today's tilt (or more accurately, this week's) pairs off Ross McKeon, nominally the NHL editor for Yahoo (with an exclamation point)-dot-com, but really more of a Left Coast Larry Brooks with his provincialism, taking on the Caps' Supreme Leader, Ted Leonsis.

Earlier in the week, McKeon offered up five ways he'd change the NHL, one of which would involve folding up two teams that have won Stanley Cups in the last five seasons and another that drew in excess of 17,000 to its arena for its last 19 home games last year (including playoffs), selling out 11 of them.

The Caps would be that last team...the one with the attendance bump and, not insignificantly, with the player who won four individual trophies this year.

This prompted a response from The Boss...

"...we play in the Nation’s Capital, the sixth biggest media market in the US. We are the fastest growing team in the league. We have the reigning NHL MVP on our team. We are a team that is built to last. We have a great and growing fan base. We will be a perennial playoff team for a long, long time. We intend to win a Stanley Cup. We are part of the fabric of our community. We love our fans and they love us back. We have built a franchise that is worth a quarter of a billion dollars with blood, sweat, tears and a major cash investment...."

It was reminiscent of another exchange...one short year ago...between the insufferably smug, yet adorably ignorant Steve Czaban of what is now ESPN980 sports radio and...yup, The Boss.

980's "The Sports Reporters" (an odd choice of show title, since they don't covey much about sports, and seem less like "reporters" than they do kids in a tree house talking about girls) apparently had disparaging things to say on their show regarding the rationality of DC United fans flocking to see mega-star David Beckham. Ted blogged about their not "getting it" with respect to sports coverage. Then he twisted the knife a bit...and a bit more...Steve Czaban took umbrage and decided to take it upon himself to take Ted to the woodshed, to which Ted pretty much responded, "it that all you got?"

Whatever you think about the antagonists in these spats, you gotta agree...

...there's something about August.
Posted by The Peerless at 7:14 AM 2 comments: