You read those power rankings?...the one's that always seem to have the Caps 25th...26th...or worse?

Well, since Thanksgiving, the Caps certainly haven't played like a team in the lower third of the league... 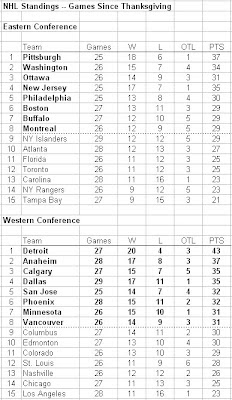 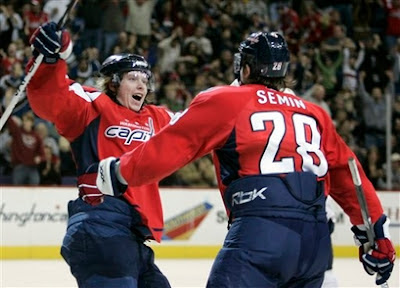 His four-point game last night was his first as a Cap. He gives no indication it will be his last. And now, he has climbed to second place in the rookie scoring race...

Posted by The Peerless at 10:18 AM No comments:

You like that?...Is the beer a little colder?…Does it taste a little better…go down a little smoother? Sure beats drowning your sorrows in it, doesn’t it?

You bet it does…The Caps are finally back to .500 after an up-and-down, back-and-forth 5-3 win over the Florida Panthers last night.

It was a game that had its scary moments for the home team, but at the end of the day, two points is two points. Besides, this was the kind of game the Caps might have let slip through their fingers a couple of months ago (mainly because they wouldn’t have scored five goals, particularly those last two).

In some ways, this club is about as close to a 1980’s-style NHL team as there is in the league. Perhaps more than any club in the history of the franchise, it dares opponents to stop its offense. This is not to say it can’t be done and that the Caps try to be too cute from time to time, but the Caps do not lack these days for aggression on offense, and it was there to see at the front and back ends of the game.

But first, there was that middle part…

scored on two of their first four shots of the second period before the period was five minutes old, putting to rest any thought that the competitive portion of the game – a 3-0 Caps advantage after one period – was over. Both goals were tip-ins by Shawn Mattias (playing in only his second NHL game), both came off drives by defensemen, both came as Mattias cut to the net along the goal line from goalie Brent Johnson’s left. Olli Jokinen closed the scoring for the Panthers – at the time tying the game – by cutting down the slot ahead of defenseman John Erskine to take a feed from Nathan Horton and burying the puck before Johnson could square himself. As it turned out, with the three goals, only Tom Poti among the defensemen avoided having his number in the NHL’s “on ice” roster for goals scored against. Alexander Semin restored the Caps’ advantage by converting a rebound off an Ovechkin shot, but the game was still a contest.

But that was the middle period. Bookending that period was some of the most dominating play the Caps have exhibited this season. came into this game to play their third game in four nights, the previous two against tough Atlantic Division opponents (splitting two decisions with and ). The Caps took the hint – four hits in the first three minutes to start tenderizing the Cats. Then they scored on consecutive shots barely a minute apart about a third of the way into the period. Mike Green one-timed a pass from Nicklas Backstrom to the side of the net to goalie Tomas Vokoun’s left where Viktor Kozlov defty tipped the puck high over Vokoun’s shoulder for the water-bottle goal. Then, it was John Erskine taking advantage of some hard work in the corners by Quintin Laing and David Steckel to send a drive past a screened Vokoun from the left point to give the Caps a two-goal lead.

The Caps then showed why faceoffs matter, and more to the point, why they are often a team phenomenon. Nicklas Backstrom and Greg Campbell were tied up in the draw with the puck at their feet when Kozlov swooped in and snapped the puck in one motion past a slow-to-react Vokoun. Fans were thinking about what sauce they’d have with their wings.

After the silliness of the second period got fans thinking they might miss out on their free treat, the Caps tended to business in the third at both ends of the ice. First, they held the Panthers without a shot on net for the first 8:01 of the period. In the meantime, they added an insurance goal off another faceoff at the start of a power play. Backstrom won the draw to Vokoun’s left cleanly to Mike Green, who wasted no time getting the puck to Alex Ovechkin just inside the Panther blue line. Ovechkin wasted no time of his own sending a slap shot past Vokoun. Total power play time elapsed: four seconds.

The difference between the Caps of recent vintage – and this would include the October 2007 version – and the team skating last night was that last night the Caps did not sit on their advantage. After the Ovechkin goal at 4:40, the Caps outshot 11-6, including 4-0 in the last minute, when the Panthers – who seemed disinclined to do so, anyway – couldn’t pull Vokoun for an extra attacker. In that last minute, Ovechkin took over, skating with the puck, not as if it was on the end of his stick, but safely in his pocket with the crowd roaring its approval.

But while we’re giving the skaters their due, let’s not forget Brent Johnson, who got the call tonight. He played a superb game with a couple of critical stops in the first period when the game was still scoreless (particularly a stop on Kamil Kreps from the slot just over two minutes in). The goals scored by the Panthers were a pair of deflections – one of which came immediately after Shaone Morrison was injured on a slap shot attempt from Olli Jokinen and couldn’t get off the ice with the puck still in the Caps’ zone -- and a power play goal that was scored with the shooter alone on Johnson. It wasn’t a spectacular performance, but it was a solid one by Johnson in relief of Olaf Kolzig…or is it now a “rotation?”

It is usually the case in looking at the numbers that Alex Ovechkin is all over the score sheet, and last night was no exception – a goal, an assist, nine shots on goal, four others blocked, but what was important was what was not on the scoresheet. Ovechkin was the dominant player of the third period. He took “only" six shifts in that third period, but he logged 7:07 in those six shifts, including one on which he scored a goal, a 2:23 shift during which he played an entire power play, and the last shift of 76 seconds at the end of the game, during which he took charge of the puck and ensured that the Panthers would not get a chance to make mischief in the Caps’ end.

John Erskine, meanwhile, took the number he wears – “4” – seriously. While not quite “Orr-ian” (he was the one sliding along the ice behind Jokinen after the Panther scored a power play goal), he was certainly more active on the offensive end than one would expect. Three shots, two other attempts blocked, and a goal in almost 19 minutes of work.

Boyd Gordon and David Steckel once more ruled the circle, winning a combined 28 of 40 draws (70 percent).

Viktor Kozlov had his first two-goal game as a Cap, and he looked as if he was thoroughly enjoying himself throughout. He’s had a difficult time getting goals (although he’s still managed a good number of helpers), and it was good to see him finding the back of the net – and to see the guys trying to get him the hat trick late in the third.

It would be hard to find a player who plays with such calm as does David Steckel in his own end. There seems to be no rush or panic in his ability to collect and clear the puck when killing penalties. It has been a problem for the Caps from time to time, but Steckel generally does a good job of moving the puck along when it is needed in the Caps’ end.

Don’t let the score sheet fool you – Tomas Fleischmann had a whale of a game last night, creating several chances for himself and others on the second line. It’s true, he’s going to need to bury those chances for himself, but he’s really stepped his game up lately.

Unfortunately, they are also only 9-for-13 in penalty killing in those three games (69.2 percent) after scored twice in six opportunities last night.

But before the Caps and their fans start feeling too good about themselves, Bruce Boudreau introduced a spoonful of reality as the club reached the .500 mark…”we’ve officially reached mediocrity.”

It was a fine crowd for a Saturday night (16,973 official), and Ted might like this one…at the end of the game, in the final minute as Alexander Ovechkin was leading the Caps in controlling the puck and still pressing for a score (the “wings” goal that Caps fans so dearly crave) in the Florida zone, Panther television analyst and hall of fame defenseman Denis Potvin said,

Highlight reel shift indeed. There’s been a fair amount of that lately from a lot of sources, as the Caps are now 15-7-4 in 26 games under Boudreau. For those of you quick with a calculator, that is a 107-point pace over a season. The adjective “lowly” can be retired for the time being in describing the Caps. Try “surging”…or “on-rushing”…or maybe just “pretty damned good.”