“Good, better, best. Never let it rest. 'Til your good is better and your better is best.”
-- St. Jerome

There is some dispute that St. Jerome actually penned this quote, but the sentiment of “constant improvement” seems apropos for a player as important as John Carlson is to the Washington Capitals.  Over the three seasons preceding this one, Carlson established himself as one of, if not the elite offensive defenseman in the NHL.  His 43 goals over those three seasons ranked fifth among all defensemen, and he ranked first in assists (170) and points (213).  His 91 power play points ranked first, as did his game-winning goal total (11).

And, there was a progress in his production over those three years that made him a to-five vote getter in Norris Trophy voting for top defensemen in each of the three years.  He finished fifth in 2017-2018, fourth in 2018-2019, and he was a finalist in 2019-2020, finishing second in voting overall.  In the chronological and productive prime of his career, Carlson has climbed to the upper reaches of all-time franchise rankings in a number of regular season categories: games played (809/second), goals (115/third), assists (407/first), points (522/first), even strength goals (84/third), even strength points (325/first), power play goals (30/seventh), power play points (192/second), and game winning goals (25/first).

Carlson’s production slipped in 2020-2021, both in total goals/assists/points and in output per game.  While the Norris Trophy finalist worthy baseline is a high bar to reach a second time, it was an off-season on offense for Carlson, who also had to deal with a knee injury late in the season that might have impacted his performance in the late stages of the regular season and the playoffs. 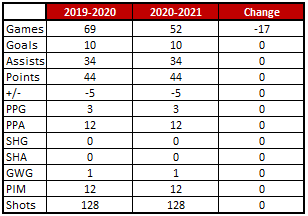 Fearless’ Take… John Carlson might have had an “off” year when compared to his Norris Trophy finalist season last year, but he still had impressive numbers.  He finished tied for fifth in goals (10), more than both of last year’s finalists, Victor Hedman (nine) and Roman Josi (eight).  He was tied for eighth in assists (34), more than Josi (25).  His 44 points tied for fifth, again more than Josi (33).  And, he finished tied for tenth in power play points (10).  As follow-up seasons go to a career year, it was not bad in terms of Carlson’s top end numbers.

Cheerless’ Take… The Caps allowed 112 goals at even strength this season.  John Carlson was on the ice for 54 of them, far more than any other Capital (Nicklas Backstrom was on ice for 42 even strength goals).  Sure, he is a number one defenseman and number one or first pair defensemen are on ice for a lot of goals against (Brent Burns/68, Set Jones/61, Drew Doughty/55, for example).  But that is three straight seasons averaging at least one even strength goal against on ice per game after never having broken that threshold in any other season of his career.  And, his even strength on ice goal differential (even, 54 for and 54 against) was the third worst of his career.

Odd Carlson Fact II… John Carlson, Victor Hedman, and Roman Josi are the only defensemen with three seasons in the last four with at least ten goals and at least 50 points.  Two of the three won Norris Trophies in that stretch, one did not.

Odd Carlson Fact III… Despite having three seasons of his career cut short by external factors (a labor/management dispute in 2012-2013 and COVID related issues the last two seasons), Carlson is tied for most 80-game seasons played by a defenseman in Caps history (six, with Karl Alzner).  And, he played in all of the games in two of the seasons that were cut short (48 games in 2012-2013 and 69 games in 2019-2020).

John Carlson has a thing against NHL teams in Pennsylvania.  In February 2020 his assist on a Carl Hagelin goal in a 5-3 win over the Pittsburgh Penguins gave him 475 career points, passing Calle Johansson for first among defensemen in points in franchise history.  In March of this season he hit another milestone at the expense of a team in the Keystone State.  The Caps arrived in Philadelphia on a roll, posting a 9-2-1 record over their previous dozen games.  Carlson was on a bit of a roll of his own, but mostly in setting up others, posting a 1-8-9, plus-2 scoring line over nine games leading up to the contest against the Flyers.  The Caps took a 2-1 lead into the first intermission in the March 11th game in Philly, and then it was Carlson’s turn to do some damage.  Evgeny Kuznetsov led a 3-on-2 rush out of the defensive end and passed the puck forward to Jakub Vrana at the Flyers’ blue line.  Vrana skated the puck down the right wing and backhanded it out of the corner to Carlson pinching in on the left side, leading to this…


It was Carlson’s 500th career point, the first and only Capital defenseman ever to hit that threshold, and he became the third-fastest active defenseman to reach that mark, doing it in 783 games (Erik Karlsson did it in 525 games, and Kris Letang did it in 753 games).

Game to Forget… April 18th vs. Boston.  A Sunday matinee hockey game in Boston turned into a movie – Groundhog Day – for John Carlson.  He was on ice for the Bruins’ shorthanded goal to open the scoring mid-way through the first period, but that was just a hint of what was to come.  The Caps took a 3-2 lead less than five minutes into the second period, and then the opening credits started rolling on Carlson’s movie from hell.  Boston scored the last four goals of the game, Carlson being on ice for each and every one of them, to take a 6-3 decision.  The five goals for which Carlson was on ice scored by the Bruins was not the most goals against on ice in a single game for any player this season, but he could see the top spot from there.  Only three players – the Flyers’ Travis Sanheim (seven) and Philippe Myers (six, in the same game, March 17th against the Rangers), and Patrick Kane were on ice for six or more goals against in a game.

Postseason… Perhaps his knee injury hampered him in the playoffs, but Carlson was rather quiet on the offensive front, posting a pair of assists in the five-game opening round loss to Boston.  Going all five games without a goal extended a drought that dated back to the regular season and covered 20 games overall.  Part of the problem was not getting pucks to the net.  He registered only eight shots in five games, and in three of them he posted only a single shot on goal.  Only three times in his last 13 regular season games was he held to a single shot on goal, and three times he posted four shots, a total he did not reach in any of the five postseason games.

Looking ahead… John Carlson has five years remaining on an eight-year/$64 million contract with a modified no-trade clause (according to capfriendly.com, he can submit a 15-team no-trade list next season, that clause becoming a 10-team list for the last four years of his contract).  In terms of his compensation cohort, Carlson is a member of an exclusive club.  Only five defensemen are between 28 and 35 years of age (Carlson is 31) and have cap hits between $7.5 and $8.5 million (Carlson’s is $8.0 million).  Of that group, which includes Oliver Ekman-Larsson, Victor Hedman, Shea Weber, and Jared Spurgeon, that only Hedman is clearly a superior player at the position.  A healthy Carlson next season would be expected to remain in this upper echelon of players.

John Carlson’s season was a complicated one.  On the one hand, he continues to be an elite offensive defenseman whose 2020-2021 numbers would have resulted in a 16-54-70 season on an 82-game basis and would have been, had he reached those totals, been Carlson’s third consecutive 70-point season.  But he was too often an adventure in his own end, or at least present for a significant amount of unpleasantness (54 even strength goals against on-ice in 52 games).  And, his 50.8 percent shot attempts-for on ice at 5-on-5 was decent, but only 88th among 214 defensemen appearing in at least 20 games.  For Carlson, the issue going forward is going to be, now that he is in his early 30’s, whether his defensive game can close the gap and improve his defense to bring it at least a little closer to his elite level of performance in the offensive end of the ice.

Posted by The Peerless at 9:31 PM No comments: