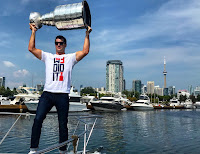 If the properties in the board game “Monopoly” were “Islanders Fans’ Heads” and “Penguins Fans’ Heads” instead of “Boardwalk” and “Park Place,” Tom Wilson would own the board with hotels on all of the properties.  If there is a player in the league who is as widely despised among fan bases as is Tom Wilson, please point that player out.  If there are players who inspire more loyalty among Caps fans than Wilson, it is a short list.

What really must fry the minds of those fans of other teams is how Wilson blossomed as a full-service contributor this season.  Yes, despite sitting out the first 16 games of the season under a suspension, he recorded 22 goals in only 63 games, the second straight seasons he obliterated his career best.  His 0.35 goals per game were more goals per game than Logan Couture (0.33), more than Phil Kessel (0.33), more than Max Pacioretty (0.33).  But in addition to his improved goal-scoring frequency, he averaged more than a minute per game on power plays (1:24) and penalty killing (2:14), both of his averages being career bests.  He led the team in hits per game (3.2), led the team’s forwards in blocked shots per game (0.8), and he was second to Lars Eller among forwards in takeaways per game (0.68 to 0.73 for Eller).

Wilson was consistent, too.  Despite that 16-game absence to start the season, only once did he not record at least five points in a ten-game segment, and that included recording five points (1-4-5) in the four games of the first segment in which he played. 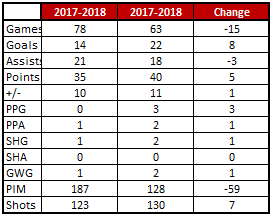 Fearless’ Take… Tom Wilson came into the NHL with an edge in his game that fans of other clubs have grown to despise, but the evolution of his offensive game this season puts him in some rarefied air in franchise history.  He is one of two players who, in their first six seasons with the club, recorded at least 50 goals, at least 140 points, and at least 750 penalty minutes.  The other?  Scott Stevens.

Cheerless’ Take… Tom Wilson put up nice numbers, but his numbers against stiffer competition were not quite as impressive.  In 32 games against teams that reached the playoffs this season, he was 6-11-17, minus-1.  And for all the hitting, it was not all that clearly associated with team success.  He was credited with four or more hits 23 times this season, and the Caps were 12-9-2 in those games; they were 9-3-1 in the 13 games in which he was credited with one or no hits.

Odd Wilson Fact… If you are going to get first line minutes, you have to play those minutes, not spend them in the penalty box with your linemates stapled to the bench while others kill those penalties.  For the first time in his career, Wilson recorded fewer than ten games with at least five minutes in penalties.  OK, it was nine games, and he played in only 63 games overall, but he shaved his total almost in half from last season (17 such games out of 78 played).

When the Caps visited Toronto in early February, it was another homecoming for Tom Wilson, but more important, the Caps were trying to re-establish some momentum.  Since recording a three-game winning streak in early January, the Caps were 6-8-3 and had not won consecutive games in regulation over that stretch.  They could solve that last problem against the Leafs after beating the Los Angeles Kings three nights earlier.

The teams were locked in a scoreless tie into the second period when the Caps broke on top on a power play by Alex Ovechkin.  Washington made it a two-goal lead mid-way through the period on a play started by Wilson.  Lars Eller dumped the puck down the right wing wall into the corner to the left of Toronto goalie Frederik Andersen.  Leafs defenseman Jake Gardiner was first to the puck, but he was separated from it by Tom Wilson coming from behind the Toronto net.  Eller collected the loose puck and fed it in front to Brett Connolly, who stuffed it past Andersen to put the Leafs in a deeper hole.

After Toronto got one back early in the third period to make it a one-goal game, Wilson restored the two-goal lead barely two minutes later.  With John Carlson in the penalty box on a hooking penalty, Braden Holtby made a big save on Mitch Marner to preserve the lead.  The puck came out to Eller, who led a 2-on-2 break with Wilson.  As Eller crossed the Toronto line, he fed Wilson skating down the middle.  Wilson skated in another ten feet and ripped a shot past Andersen’s blocker to make it 3-1, 6:46 into the period.  It would prove to be the game-winner, Wilson’s second of the season and his only shorthanded goal, as the Caps won, 3-2.

After opening their next to last road trip of the season by splitting a pair of games in Pennsylvania, losing to Pittsburgh to snap a seven-game winning streak and beating Philadelphia, the Caps headed south to Florida to meet the league’s top team in the standings. The Lightning made short work of the Caps, scoring two goals 1:58 apart mid-way through the first period and recording a third goal less than four minutes after the Caps halved the deficit to take a 3-1 lead to the first intermission.

Washington closed the gap to a goal in the second period and again in the third, but Tampa Bay added two late empty net goals for a 6-3 win.  For his part, Wilson 18:41 in ice time, recording only one shot attempt (a miss) and was minus-2.  In addition to the penalty he took that led to a Lightning power play goal, hHis frustration was reflected in logging a team-high seven hits and taking a ten-minute misconduct penalty (coincidental with Erik Cernak) in the last seconds of the contest.  It would be the last of five occasions this season that Wilson recorded more than ten minutes in penalties.

Postseason…  Tom Wilson had, by appearances, a decent postseason, going 3-2-5, plus-1, in the seven-game series against Carolina.  However, it would be deceptive and similar to that of several of his teammates.  Wilson was 3-2-5, plus-2, with nine shots on goal in four home games, but he was held without a point, was minus-1, and recorded only two shots on goal in three road contests.  On a per game basis, though, his three goals in seven games did outpace his five goals in 21 games last season, but like other Capitals, had he managed one on the road or assisted on one, we might be having an entirely different conversation than one about the postseason he just completed.

Looking ahead… Wilson is in the Capitals’ fold through the 2023-2024 season with a $5.167 million cap hit, one of four current Caps with deals extending to that season or longer (Evgeny Kuznetsov, T.J. Oshie, and John Carlson being the others).  He, Kuznetsov, and Jakub Vrana (assuming he is re-signed), none older than 26, might be considered the second wave behind Alex Ovechkin, Nicklas Backstrom, and John Carlson, none younger than 29, among homegrown Caps that constitute the core of the club.  It makes Wilson’s maintaining or exceeding this year’s level of production an important part of the Caps’ chances for success in the years to come.

At the highest level of observation, Tom Wilson had a superb season.  Career highs in goals, assists, points, more special teams responsibility, maintaining a hard edge and an ability to distract and annoy opponents, not to mention their fans.  However, drilling down there seems to be more work to do in terms of being heard from more often against stiffer competition and finding home-road balance in the postseason.  However, Wilson also turned 25 years old just this March.  There is room for him to grow, but he has already justified his role as a top line, two way player.  It is a matter of continuing that upward path on his developmental arc and leaving the obsession over his style to the minds of other fans in the game of “Wilsonopoly.”