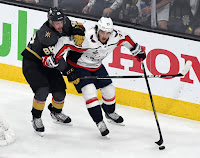 “What a mistake to suppose that the passions are strongest in youth! The passions are not stronger, but the control over them is weaker! They are more easily excited, they are more violent and apparent; but they have less energy, less durability, less intense and concentrated power than in maturer life.”
-- Edward Bulwer-Lytton

Few players in the NHL play the game with more passion than T.J. Oshie.  The phrase, “he comes to play every night,” seems to have been created for him.  Just not by Edward Bulwer-Lytton.  But Bulwer-Lytton certainly penned a other phrases that could also apply to Oshie…

“It was a dark and stormy night…” There have been a lot of “dark and stormy nights” in the career of T.J. Oshie, at least more than his fans would like.  And by that, we mean nights in which he suffered injury that took him out the lineup for extended stretches.  In 11 seasons in the NHL, Oshie missed at least a dozen games five times; he has played as many as 80 games twice and has never played an entire regular season schedule.  Last season he missed 13 regular season games, 11 to an upper body injury, another to illness, and another for an undisclosed reason.  There were also the three games he missed in the postseason with a broken clavicle suffered Game 4 of the opening round series against Carolina.  He might not have been a difference maker in either Game 5 or Game 6, each game a lopsided decision for each team.  But in a tied Game 7 that went to a second overtime before being decided?  It is not too big a stretch to think his presence would have mattered.

“Prudence, patience, labor, valor; these are the stars that rule the career of mortals.” In his seven seasons in St. Louis, Oshie was a consistent goal scorer bordering on spooky.  He never averaged less than 0.23 goals per game (and that was in the abbreviated 2012-2013 season, cut shorter by injury that limited him to 30 games) and never more than 0.27 goals per game.  He stepped up in a big way after coming to Washington.  Only once in four seasons has he averaged less than 0.33 goals per game (in 2017-2018, 0.24 goals per game).  Last season, that goal scoring mattered.  The Caps lost only one game in regulation in the 20 contests in which Oshie scored at least one goal, posting a record of 16-1-3.

Since 2008-2009, when T.J. Oshie came into the NHL, only three Capitals have recorded more 20-goal seasons with the club than Oshie: Alex Ovechkin (11), Nicklas Backstrom (six), and Alexander Semin (four).  Oshie has three such seasons.  He also spent the first seven of those 11 seasons in St. Louis with the Blues.

In 11 seasons in the NHL, T.J. Oshie is one of only three players over that span to record at least 65 shots in each of those seasons (65 was his career low, in 2012-2013) and post shooting percentages over 10 percent in each of them.  The other two players are Sidney Crosby and Thomas Vanek.

Over the last four seasons, no duo in the NHL has posted more power play goals than the pair of Alex Ovechkin and T.J. Oshie (104).  Sure, Ovechkin has 71 of them, but Oshie manning the center of the 1-3-1 power play scheme and a right-handed shot best able to accept and convert passes from Nicklas Backstrom or Evgeny Kuznetsov on the right side for 33 power play goals is a critical ingredient to the Caps’ success on the man advantage.  In the 32 games as a Capital in which Oshie scored at least one power play goal (he had two in a 4-3 overtime loss to Tampa Bay in October 2017), the Caps are 24-3-5.

T.J. Oshie is an example of the player with an ice time conundrum (did I use that word right, cuz?...”yes, you did”).  More ice time, worse outcomes.  Last season he skated at least 20 minutes 18 times, but the Caps were just 7-8-3 in those games.  He skated less than 18 minutes in 23 games, and the team was 16-6-1.  Then there was “Ornery Oshie.”  Seven times he was credited with five or more hits, and the Caps were 2-4-1.  Blocked shots?  The Caps were 7-4-3 in the 14 games in which he had at least two.  Oshie clearly plays with a lot of passion and sacrifices his body in service to winning, but wins don’t seem to come quite as often when he is playing games like that, at least last season.


The Big Question… Can T.J. Oshie’s game be “tamed” and preserve its effectiveness?

No one who watches T.J. Oshie play will make a claim that he is a timid player or that he won’t do what it takes to win, even if it means putting himself in harm’s way and skating into tight places that invite physical contact.  On the other hand, after appearing in 80 games in his first season with the Capitals, he has missed 35 regular season games over the past three seasons.  The odd part of it all is that in the last three seasons, the Caps have a better points percentage (72.9 percent of available standings points earned) in games Oshie missed than in those in which he played (65.4 percent).

One might argue that this is a superficial comparison that should also be subjected to accounting for who the Caps played when Oshie was out, where they played (home/away), and even when (whether the Caps had safe seeding/standings position in his absence).  But regular season games are one thing, playoff games are another.  The Caps rallied after Oshie’s injury in last season’s series against Carolina to wallop the Hurricanes at home in Game 5, 6-0.  But the Caps scored only five goals over the final two games of the series, none in the last 57 minutes of their season.  When you think of the adversity that the Caps faced in the first round of their 2018 postseason, adversity that was overcome on their Stanley Cup journey, Having all hands on deck to address the difficulties faced against Carolina might have had a different outcome had all hands been on deck.  Perhaps history would have repeated itself.

This is not to lay blame at the feet of Oshie for playing hard and finding himself in an awkward circumstance that led to his injury in Game 5, nor is it an argument that Oshie has to change his game radically to preserve his presence in the lineup.  This has been the tradeoff the Caps and Oshie have made since he arrived in Washington.  He plays bigger than his size, is absolutely fearless in his approach to the game, but it has come at a price.  Taming his game could alter the balance of aggression and production, and that might be a bargain neither he nor the club can effectively make.

Alex Ovechkin is the straw that stirs the drink, and Nicklas Backstrom knows how to serve it up, but T.J. Oshie might be the secret ingredient.  In his four years in Washington he is second in goals (102, to Ovechkin’s 183), fifth in assists (106), fifth in points (208), second in power play goals (33), tied for second in shorthanded goals (two), fourth in game-winning goals (16), second in shooting percentage (17.1 percent; minimum: 50 shots), sixth in credited hits (486), sixth in blocked shots (221, tops among forwards), and is first in takeaways (208, he has a takeaway/giveaway ratio of a superb 1.34:1).

On top of that, Oshie is tied for second in postseason goals over the four seasons he has skated for the Caps (19, with Evgeny Kuznetsov), fifth in assists (26), four in points (45), tied for second in power play goals (10, with John Carlson), and tops in game-winning goals (five).  He might be overlooked in some quarters, between the spotlight shining on Alex Ovechkin and the persistent, “is Nicklas Backstrom the most underrated player” question.  But his importance to the club, both in his read-for-battle attitude and his production across a range of statistical categories and situations, brings to mind another quote from Edward Bulwer-Lytton… “The brave man wants no charms to encourage him to his duty, and the good man scorns all warnings that would deter him from fulfilling it.”