The Peerless Prognosticator is ON THE AIR!!! -- Caps vs. Lightning, April 9th

You keep vehrking…uh, working on that, Professor. As for the game, the Caps have made Tampa their personal scrimmage partner this year. Washington has won all five games played to date by a combined score of 26-12. Perhaps surprisingly, the Caps have not built that margin on the strength of their special teams. Washington is 5-for-23 on the power play against the Lightning this year (21.7 percent – and three of those goals came in the last game, in which the Caps were 3-for-9), while they have killed off 15 of 18 shorthanded situations (83.3 percent). 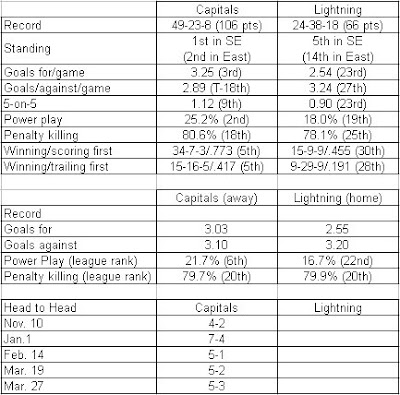 It does not paint a pretty picture for the Lightning, as they rank in the bottom third in the league in every measure except their power play. And, the Lightning have been playing even worse of late. Since March 1st, they have earned only 14 of a possible 36 standings points available to them and have only four wins in the 18 games played since March 1st.

What is especially noteworthy about their record since March 1st is having played in eight extra time games. Not surprisingly, the Lightning have lost six of those eight games. No team has played more extra time games this season than Tampa Bay (23), and no team has a worse winning percentage in those games (.217 on a 5-18 record). Conversely, the Lightning don’t get blown out as much as you might think. They are tied for having the 15th fewest number of three-or-more goal losses. Their 12 such losses are only one more than Pittsburgh and one fewer than…gulp…the Caps.

Individually, Tampa Bay is a team that struggles offensively, especially after you get past the top five scorers. The Lightning have five players with 40 or more points – Martin St. Louis, Vincent Lecavalier, Ryan Malone, Vaclav Prospal, and Steven Stamkos. After that, you drop all the way to 19 points to find the sixth leading scorer – defenseman Lukas Krajicek.

And, if the Lightning struggle on offense, they are having health issues as well. Lecavalier and Malone will be out for this one, depriving the Lightning of two of those top-five scorers. Add to that the fact that defensemen Paul Ranger, Andrej Meszaros, Marek Malik, Josef Melichar, Cory Murphy, and Richard Petiot are either out or questionable, and this is a team that is more likely to resemble their AHL affiliate Norfolk Admirals than a real life NHL team.

Looking at the three top scorers for the Lightning who should play this evening, you can’t say Martin St. Louis or Stven Stamkos have bailed on the season. St. Louis is 10-10-20 in 18 games since March 1st, while Stamkos is 9-8-17 in the same number of games (a 77-point pace, not bad for an 19-year old rookie). On the other hand, Vaclav Prospal has been largely absent while still wearing a sweater. In his 18 games since the beginning of March, he is 4-3-7 and has only two points (both goals) in his last 11 games. He is also dead last on the team in plus-minus (-18).

In goal, Tampa Bay has alternated Karri Ramo and Mike McKenna faithfully over the past 11 games. That would mean that McKenna gets the start against the Caps tonight. This would be good news for Caps fans. Since March 1st, McKenna is 2-4-0, 3.85, .884. He’s lost all three of his appearances against the Caps this year with a 5.20 goals against average and a .820 save percentage.

If Vaclav Prospal has the worst plus-minus on the team, Pettinger’s is worse on a per-game basis. He is -15 in only 57 games. He is, though, 4-2-6 in 18 games since the beginning of March, which passes for secondary scoring on this club. He is the 11th leading scorer for the Lightning overall at 6-7-13 (the 11th leading scorer for the Caps is David Steckel at 7-11-18, although Steckel has played in 74 games). Pettinger might be remembered by history in the same way guys are remembered in a photo showing a Julius Erving dunk as they cringe under the basket. It was Pettinger who blocked the original shot from Mike Green just before Green deposited the rebound into the Tampa net to set the new record for consecutive games with a goal by a defenseman. He has only one assist in four career games against the Caps.

Fedorov did not have a particularly good game last time out against the Atlanta Thrashers. But he’s had his way over the years against the Lightning – 15-22-37, +7, in 27 career games. He has not, however, registered any of those points against the Lightning this year in the three games he’s played. Nevertheless, he does have points in three of his last four games (3-1-4) and has been over 60 percent wins on faceoffs in an astonishing seven of his last 11 games. It would be nice if he kept that points producing run going, but his contributions are as likely to come in other areas of the score sheet.

The Caps have dominated the Lightning this season largely on the basis of production from the “Young Guns.” Alex Ovechkin, Nicklas Backstrom, Mike Green, and Alexander Semin are a combined 14-20-34, +24 in the five games played thus far. The 14 goals scored by this quartet amounts to 54 percent of the total goals scored against Tampa Bay this year by the Caps. Ovechkin, Backstrom, and Green have points in each of the five games they have played against the Lightning this year. Semin was held off the scoresheet once in three games. 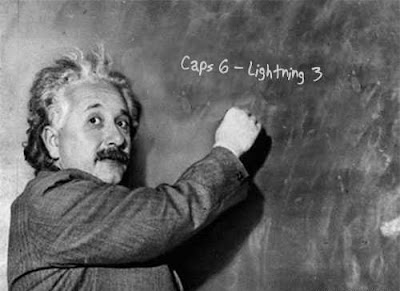