It would be tempting to say that this afternoon’s 2-1 loss to the Boston Bruins was a product of shoddy officiating (there was that) and a lack of discipline on the part of one of the players the Caps look to for leadership in times like this (there was that, too).

But this was a team loss, in every sense of the word. Let’s start with that third period, the one in which the Bruins scored two late goals to win...

That’s it. No shots on goal from the offensive zone...none.

Then there were the misses on the chances they did have...Brooks Laich failing to cash in on a shorthanded rush with five minutes gone in the second...Tomas Flesichmann in alone on Bruin goalie Alex Auld off a feed from Alexander Semin ringing the puck off the pipe.

The Caps played just enough to put themselves in a position to have the game settled on the basis of a series of brutal calls by the officials. And in that, there is a silver lining. This is a loss, but one that need not be crushing. The Caps were, despite the Bruins coming out full of piss and vinegar, and with a grudge to settle, the better team for just about the entire game. Cristobal Huet had a superb game in goal, which sets up an interesting choice for coach Bruce Boudreau to make for tomorrow’s game against Pittsburgh.

But if the Caps didn’t play quite well enough – and they didn’t – the officiating was, to be charitable, off its game. Let’s start with the first period...a five minute and game misconduct for kneeing for Matt Cooke. First, let’s get this out of the way...a major penalty for kneeing requires that an additional game misconduct be applied (Rule 50.5). The question is, why a major penalty in that instance? The infraction itself is defined at Rule 50.1 as follows:

Kneeing is the act of a player or goalkeeper leading with his knee and in some cases extending his leg outwards to make contact with his opponent.

Well, we’ve looked at the video of that and wonder, “where was the “leading with his knee” part? That there would be a question about this in our mind (which questions the very call itself) begs the next question, how could the referee be sure that the violation merited a major penalty? Rule 50.3 permits – but does not require – a major penalty to be called, that the referee may, “at his discretion, may assess a major penalty, based on the severity of the infraction, to a player or goalkeeper guilty of kneeing an opponent.” Sorry, but to put a team at a manpower disadvantage for five full minutes seems to require a higher threshold than what was the case here. As it turned out, Bobby Allen – the victim of this heinous crime – came back later in the period and ended up skating another 2:17 (of his 5:44 of total ice time) after suffering this tragedy 4:06 into the second period. The refs got snookered. 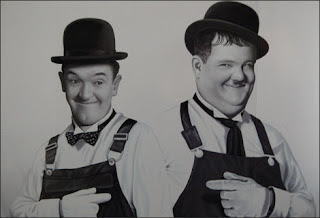 Referees Rob Martell and Chris Rooney trying to figure out who makes the next call.
And that made the end-game a little harder to understand. The Brashear calls looked to be on the far side of the line, meriting penalties. The rest?...it is hard to understand the calls on John Erskine and Tom Poti in the context of what the referees let go on. In a league where legend has it that things even up in the end, every call that had a choice about it went in Boston’s favor. That happens, although it would be tough to finish one point out of the playoffs with this kind of game having been called. But again, in the end, the Caps had chances they didn’t convert earlier in the game, and one could take some measure of solace in that they were the better team for most of this contest. That should give them a measure of confidence moving forward.

This might be a speed bump on the Caps’ march to the playoffs, or – if the club lets it get to them – could be the start of a slump the team simply can’t afford. We’ve seen enough of the Caps in the last couple of weeks to think it’s the former, that they will be ready to go when the puck drops tomorrow at Verizon Center. And this edgy kind of loss will be a memory.
Posted by The Peerless at 8:37 PM 2 comments:

Reputation and Results -- The Caps vs. the Rest of the League

There are a couple of sentences in this morning's article in the Washington Times about Bruce Boudreau that got me to thinking...just how bad have the Caps done outside the Southeast Division under Boudreau?

This is what Corey Masisak wrote...

"...what Boudreau has accomplished in a short span with the Caps is remarkable. This career minor leaguer has transformed them from the worst team in the NHL into a legitimate contender, albeit in a weak Southeast Division."

Well, you know what?...For the reputation the Southeast has as being "weak," it hasn't shown up in the Caps' performance against non-Southeast teams.

And here is your fun fact for today...

The Caps have at least a .500 record (based on points earned of those available) against every division in the NHL this year but one...

They certainly will have their chances to improve upon their Southeast record with eight games yet to be played, including the last seven of the season.
Posted by The Peerless at 10:22 AM 1 comment:

The Peerless Prognosticator is ON THE AIR!!! -- Caps vs. Bruins, March 8th

It’s Revenge Saturday…for the Boston Bruins (how often in the last few years could we have said that of any opponent?). The Bruins will be looking to reclaim some of their collective manhood after being beaten and beat up in the school yard, 10-2, last Monday. We chronicled ’s recent performance here, a reminder that this can be – and still is – a dangerous team. We’ve got the Monday result here, and the week that was Boston goaltending here, for those of you looking to relive, as it were, a fun night and to revel in the misfortune of others.

It’s a big weekend for the Caps, with the Bruins still five points up on the boys and tomorrow’s opponent – the Pittsburgh Penguins – with the second best record in the East (by virtue of having more wins than ). But the Caps have been equal to the task lately, going 4-1-0 in their last five. Since NBC will be covering the Penguins visit tomorrow, we decided to sit down with the guys covering the game to get their take on the Caps, their chances today, and their shot at the playoffs…

Mike Emrick…you’ve been at this for 27 years and have seen it all. You get to see a great like Martin Brodeur every night covering the Devils. But have you ever seen a player with the skill, toughness, and flair for the dramatic as Alex Ovechkin.

ME: “I was watching Ovechkin the other night – the child of Mikail…a former professional soccer player, and Tatiana…who won Olympic gold for the Soviet Union in Montreal in 1976 and in Moscow in 1980 – and he was skating in on Tim Thomas, a native of Flint, Michigan, and a former Catamount at the University of Vermont, where he was a three-time all-ECAC – ECAC stands for ‘Eastern College Athletic Conference' – selection and finished his career atop the Catamount record book in games, with 140, wins with 81, and minutes played with 3,950, and…what was the question again?”

Pierre McGuire…you’ve done it all in hockey – played, coached, served in the front office, written about it, provided commentary on it. Do you think the Caps have a chance to overtake the teams in front of them for eighth place or to catch for the Southeast Division title and a top-three seed?

PMcG: “Down here from inside the glass between the benches, I have to say you can’t count the Caps out, but if they only had Sidney Crosby, they’d never lose a game…”

You mean adding to this roster?

PMcG: “No, just Crosby…if it was just The Kid and coach Bruce Boudreau, they’d never lose; they’d be spending the whole game in the other team’s end of the rink.”

Mike Milbury…the Caps added Sergei Fedorov, Cristobal Huet, and Matt Cooke at the deadline. They gave up Matt Pettinger, a prospect, and a couple of draft picks. Good moves?

MM: “Good, but they could have been so much better. First thing I would have done is trade Varlamov and Semin for a couple of forwards only I would have thought would work out…”

You mean, like when you traded Olli Jokinen and Roberto Luongo to for Mark Parrish and Oleg Kvasha?

MM: “Exactly…then I’d have moved that Neuvirth kid for a forward who won’t play another three season’s worth of games for the rest of his career and a low draft pick…”

Like when you traded Tommy Salo for Mats Lindgren and an 8th round pick?

MM: “Now those would have been trades…”

That’d be one word for them…Ed Olczyk, you were a hometown #3 overall pick of the Blackhawks in 1984, played in both and , coached Sidney Crosby. You’re somewhat acquainted with the pressures of the limelight and being the hometown icon. What do you make of the situation with the Caps’ local icon – Olaf Kolzig?

Guys, you have any advice for the Caps today against the Bruins?

ME: “When the Caps take the ice at TD Banknorth Garden today, an arena, by the way, in the West End neighborhood of that is named after its sponsor, TD Banknorth. TD Banknorth – perhaps ironically – is a 100 percent-owned subsidiary of Toronto-Dominion Bank, although it traces is own history to the Portland Savings Bank, which was established in 1852, which coincidentally is the year in which Chris Chelios, as legend has it, played his first organized hockey game. What was the question again?”

PMcG: "Well, the B’s will be buzzing today, no doubt. When you’re wearing the black and gold – the same colors that Sidney Crosby wears, by the way – you can count on a maximum effort, unless they come out flat, in which case they won’t.”

Mike, how about the Caps…think the new guys can make a difference today?

MM: “Without an Oleg Kvasha or a Mats Lindgren-type player out there, it’ll be tough. I think they struggle today…”

Well, if Mike says it, it has to be…well, “true” isn’t the word we’d have been searching for…

Posted by The Peerless at 8:29 AM No comments: