Circle June 16th on your calendars

Puck the Media (which we found via Hooks Orpik over at Pensburgh) has what looks like a preview of the nationally-televised game schedule for the Stanley Cup playoffs.

And if things go to a 7th game in the Finals, by this schedule, then you might find yourselves crowded in a bar or around your TV sets on Tuesday night, June 16th, for Game 7 of the Stanley Cup final.

PTM notes some problems with this schedule -- the potential of a 12-day hiatus between the conference finals and the Cup final looking to be a doozy -- but when we looked at it, we thought...geez, the NHL really is becoming the NBA. The NBA seems to have a fetish about stringing out its playoffs, and now the NHL looks to be heading down that road, too.

But The Peerless doesn't care...so long as it's the Caps playing on June 16th. Or maybe it would be better that the season ended on June 14th for the Caps, seeing as that would likely be a home game...
Posted by The Peerless at 10:55 AM 3 comments:

The Peerless Prognosticator is ON THE AIR!!! -- Caps vs. Sabres, April 3rd

The last home stand of the regular season is half over, and the Caps have two wins to show for it. They will look to make it three in a row when the Buffalo Sabres come calling. And that means Lindy Ruff will be in town coaching the Sabres. Ruff is the longest tenured coach in the NHL, and his history with the Sabres dates back to the 1979-1980 season, when he broke in as a 19-year old and played 63 games for the Sabres.

- The US returned the Canal Zone to Panama

- The Quebec Nordiques’ Real Cloutier became only the second NHL player to record a hat trick in his first game.

- Mother Teresa was awarded the Nobel Prize for Peace.

- Home Depot was four months old and was operating in four stores in Georgia.

- Bryan Trottier was the defending Hart Trophy winner. It would be the last time someone not named “Gretzky” won the trophy for the next eight seasons.

If the Caps made a habit of playing desperate teams in March, then they are playing a team on life support tonight. Being six points out of a playoff berth with six games to play qualifies for the NHL equivalent of last rites, and the Caps could administer them this evening. What is puzzling is how Buffalo got into this position given their numbers… 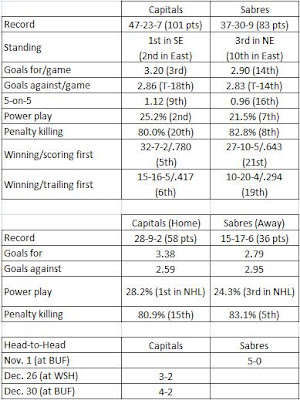 Part of the problem, it seems, is that Buffalo’s strength in past year – its scoring balance – has become something of a weakness. The Sabres have 18 players in double-digit scoring and could finish the season with 20, which would match their number from two seasons ago. But that 2006-2007 team, which led the league with 53 wins and 113 standings points, had two players topping 80 points – Daniel Briere (95) and Thomas Vanek (84). Maxim Afinogenov pitched in at better than a point per game pace, too.

This year’s Sabres might be balanced, but they seem to lack a go-to scorer. Vanek looked to be that guy early, scoring 25 goals in 37 games in the 2008 portion of the season. But since New Year’s Day, he has only 12 goals in 30 games. He had an especially difficult March with only three goals in 12 games. Perhaps April agrees with him a bit more – he had a pair of tallies in a 3-2 overtime loss to Atlanta in his first game of the month.

Dominic Moore was picked up at the trading deadline from Toronto, perhaps with an eye toward providing some secondary scoring. He was in the midst of his best offensive season – 12-29-41 in 63 games with the Maple Leafs – but he’s been more or less silent in Buffalo. In 12 games since the trade, he is 1-3-4. Buffalo is his fifth team in five NHL seasons. We’re betting he’s on a first name basis with moving van companies across North America.

Two years ago, in that 53-win season, the Sabres had seven defensemen with at least ten points, and all 10 of those who dressed that year finished the season even or better, led by Brian Campbell’s +28. This year, there is that balance – six defensemen have at least ten points – but the scoring is down significantly, and among those players who have played in at least 50 games, only Craig Rivet is in plus territory.

Last week, CBC asked the question in an online story headline, “Is it too late for Miller to save Sabres?” At this point, that’s about what it comes down to. Buffalo has become a very average offensive team, and the defense has holes in it due to departures and age (five defensemen are past 30, and two are past 35). The Canadiens and Rangers aren’t playing so well in seventh and eighth place that they are impossible to catch at this stage, but the Sabres would almost have to win out to do it. And to do it, Miller has to be at his absolute best, starting tonight.

To be charitable, Nylander has had a difficult year. It is the classic case of a player with skill and talent who just doesn’t seem to fit in with what it is the Caps are trying to do. Nylander had a rough March – 1-2-3, -3, in eight games and sitting in the press box on some nights. April, if it is possible, started worse. In the first game this month, he was held off the score sheet and sat for the last 17:48 of the game after skating only eight minutes. He does have 28 points in 37 career games against the Sabres, though, and sometimes the day is darkest before the dawn. Let’s hope so…the Caps could use a productive Nylander going forward.

The Caps are in a position to make history – they are within six standings points of the franchise high for a season – in a season where a fair amount of history has already been made. But that is really secondary. The Caps are getting ready for the playoffs. Jose Theodore could get the baseball cap tonight in favor of Semyon Varlamov, and Coach Bruce Boudreau might be further inclined to test line combinations and defense pairings. It could make for a closer game than fans might like, but in the end, well…two points is two points.