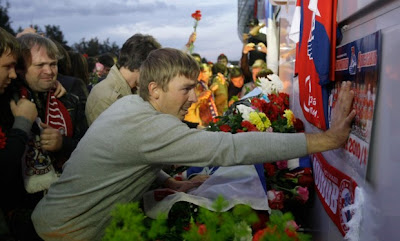 Picture: Misha Japaridze/AP
Posted by The Peerless at 8:52 PM 4 comments:

Young Guns, One and All -- Part 3: Alexander Semin in the Playoff Era

The third installment of this series on the Young Guns in the Capitals’ playoff era turns to Alexander Semin. And there is a familiar look to his history in this era. So much so that as we get to the third player in this group, some unsettling thoughts start to intrude on the review. But we will get to that. Meanwhile, if you look at Alexander Semin’s trend line of rolling ten-game point totals, there is that familiar pattern again…

(click for larger picture)
...a thin start to the series, followed by a rather productive stretch, and then a fade that results in a trend line that diverges from that of the comparable standings points trend line over the period. Semin’s trend over the period resembles that of Nicklas Backstrom, except more so – a slower start and a weaker finish. The reasons here, however, might have less to do with production factors as it does health. Health (we include games missed in the rolling ten-game plot) affects Semin more than it does either Ovechkin or Backstrom. While the latter two have missed a total of 21 regular season games over the past four years (the years under examination here), Semin missed a total of 65 games of his own.

But if you compare that to the rest of this four-year playoff period, Semin played in only 149 of 203 games (73 percent) and went 68-60-128, plus-24. On a per-82 game basis that works out to 37-33-70-52, plus-13. It is small wonder, then, that Semin has that swell of production in the middle of his series – he was healthy and out-produced his career totals and the games of the series when his health was a sporadic thing.

That plus-29 pace over the last 40 games in which Semin played mitigates somewhat the significant drop in offensive production – the team did alter its philosophical approach to emphasize defense. But there is the nagging thought that more than philosophy, it is Semin’s ability (or rather, inability) to stay in the lineup for long stretches that is what is holding him back from being a truly elite producer. That 125 game stretch in which he played consistently – 91 percent of the games played – shine rather brightly as an indicator of what a durable Semin could be.

We are not going to use this entry as an opportunity to pile on to commentary about Semin’s work ethic, his capacity to care, or his threshold for enduring physical discomfort. We are no better than anyone else in our ability to crawl inside a player’s head and figure out what’s going on in there (which is to say, we have no such ability whatsoever). But it seem quite clear that Semin is a more consistent, more devastating player on offense when he gets into the lineup and stays in the lineup. When he is in and out because of injury, he cannot establish a consistency or a rhythm to his game. He is almost the caricature of the high-end sports car that is temperamental in terms of consistent performance, but a dream to drive when it is running smoothly on all cylinders.

And that brings us to those unsettling thoughts intruding on this review as we wind our way through Alexander Semin’s performance. So far, all three of the “Young Guns” have seen their potential to pop poop out in the latter stages of this four-year period. Perhaps the systematic drop in production is just that – a product of implementing a different philosophy a third of the way through the 2010-2011 season. That each of the players’ production started to diverge from the standings point trend line makes this a plausible explanation.

Having seen Alexander Semin’s numbers, we are left wondering if the drop in production was “system-influenced” or an artifact of having already seen the best these three have to offer, career-wise, in terms of offensive production. That will make the 2011-2012 season interesting to watch for each of these three players. But that is getting ahead of ourselves. We still have one Young Gun to look at, and we will get to that shortly.
Posted by The Peerless at 12:17 PM 1 comment: