The Peerless Prognosticator is ON THE AIR!!! -- Game 67: Capitals at Kings, March 9th

The Washington Capitals have won two straight games in extra time and will look to make it three wins in a row – in 60 minutes, if possible, but more if needed – when they head to Los Angeles to take on the Kings on Wednesday night.

For the trepidation express in some corners of Capitals Nation over whether or not the team is playing well or relying too much on winning one-goal decisions, the fact is that since they dropped a 5-2 decision to the Florida Panthers to open the month of February, the Caps are 14-4-0.  If you do not want to do the math, that translates to a 128-point pace per 82 games, one point better than their pace over the season as a whole (127-points on an 82-game basis).

Meanwhile, the Kings are back in the conversation as to which teams might be serious contenders for a Stanley Cup finals berth, although they have stumbled a bit of late.  After putting together a four-game winning streak as February was winding down, the Kings have alternated losses and wins over their last four games.  They have outscored opponents by a 12-10 margin.

Drew Doughty is one of the true minutes eaters in the league among defensemen. Coming into this season he was one of just four defensemen in the league to have played in at least 75 games and averaged more than 23 minutes of ice time per game in each of six full seasons he has been in the NHL (not counting the abbreviated 2012-2013 season when he averaged more than 26 minutes while playing in all 48 games).  Dan Girardi, Brent Seabrook, and Shea Weber are the others.  He is on his way to doing it again, having appeared in all 65 games for the Kings so far this season and averaging a career high 28:23 a game in ice time.

But Quick is not judged by his regular season numbers any more.  He might never be a Vezina Trophy winner, but he does have two Stanley Cup rings.  In the post-2004-2005 lockout era, six goalies have appeared in 25 playoff games, have a goals against average less than 2.25, a save percentage of over .920, and at least five shutouts.  Quick joins Lundqvist, Rask, Crawford, Tim Thomas, and Chris Osgood on that list (note: Washington’s Braden Holtby would be on that list bur for the fact he has only two shutouts in 34 games).   In his last ten appearances he is 6-3-1, 1.91, .930.  Quick is 5-2-0, 2.38, .918 in seven career appearances against the Caps. 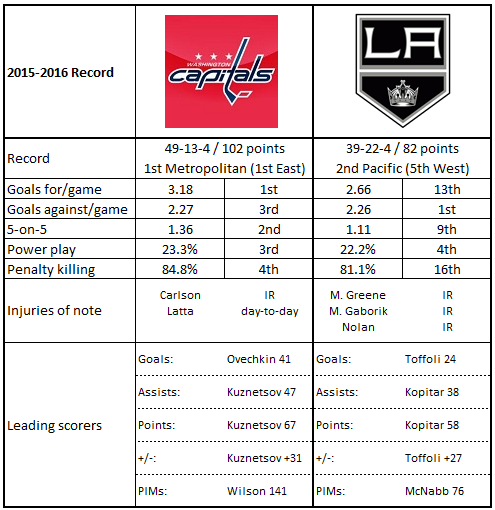 1.  Both of the Kings’s losses over their last four games were at the hands of the Anaheim Ducks, who the Caps defeated on Monday night.

1.  Evgeny Kuznetsov leads the Capitals in total scoring with 67 points.  The last Capitals not named Alex Ovechkin or Nicklas Backstrom to lead the team in total points was Robert Lang, who had 74 points (29 goals, 45 assists) in 63 games in the 2003-2004 season before he was traded to the Detroit Red Wings.

2.  Alex Ovechkin is the only player still with the Caps who played in the last game the Caps won in Los Angeles.  He recorded an assist on the game-winning goal by Jamie Heward in the Caps’ 3-2 win on December 14, 2005.

5.  Washington has been at 50 percent or lower in Corsi-for at 5-on-5 in five of their last six road games, going 47.3 percent overall in those six games (numbers from war-on-ice.com).
The Peerless’ Players to Ponder

For 14 seasons, Vincent Lecavalier tormented Capitals Nation as a member of the Tampa Bay Lightning, scoring 34 goals in 77 games against Washington.  Then he went to Philadelphia and added a goal in three games with the Flyers.  However, in last season and this he came up empty against the Caps in five games with Philadelphia.  He gets to renew acquaintances with the Caps on Wednesday night in the autumn of his career.  At 35 years of age and his most productive years well behind him, he has found a measure of renewal in Southern California.  In 26 games he has six goals, a modest number, but it is just two short of the eight goals he posted in 57 games with the Flyers last season. And, he is getting more ice time – 14:01 a game, more than four minutes more than he was averaging with the Flyers this season (9:28).  I(n 85 career games against the Caps, Lecavalier is 35-36-71, minus-9).

Players learning the game might have consistency in production become the last element to add to their game.  Despite the fact that Tom Wilson has established career highs in goals (six), assists (14), and points (20) in 66 games, consistency is that thing he is still working into his game.  Sometimes that is hard to do as a third-liner who does not get any meaningful power play minutes, but Wilson has gone four games without a point and is 1-1-2 in his last 13 games.  He has shown restraint, not letting the mini-slump spill over into taking large chunks of penalty minutes.  He does lead the team in that category, but he has just seven minutes in penalties in his last five games, all of them coming in the 2-1 overtime win over Boston on Saturday.  Wilson does not have a point in five career games against Los Angeles.

They say all good things come to an end.  Well, all bad things do, too.  The Caps are 6-2-0 in eight road games since the All-Star game break.  Part of their success has been their power play, which has goals in five of the eight games.  This is yet another in what seems to be a series of games that is being described as “possible Stanley Cup finals preview.”  The common thread in that is that the Washington Capitals are the team always included in the commentary.  There is a reason for that.  They’re pretty good, even on the road, where they have the best winning percentage in the league (23-7-2/.719).  It makes one think they can extend their California winning streak by ending their losing streak in Los Angeles.