“It's not what you look at that matters, it's what you see.”
-- Henry David Thoreau

Brooks Orpik is no stranger to mixing it up in the corners of a hockey rink.  In 11 seasons with the Pittsburgh Penguins, Orpik earned a reputation as a defenseman who made life difficult for opponents who crossed his path or entered his territory.

Nothing prepared him for the cross-checks and the sharp elbows flung in his direction by commentators after he signed a five-year, $27.5 million contract as an unrestricted free agent with the Washington Capitals.  The adjectives in the headlines announcing the deal said it all…

You would think Orpik was a stiff who needed assistance lacing his skates.  In fairness, the contract seemed outsized in dollars and term given Orpik’s age (he was less than three months from his 34th birthday when the deal was signed) and mileage (795 regular season and playoff games; almost 16,000 minutes of ice time in the NHL).

The new generation of hockey data analysts were not exactly enthralled with the signing, either.    If Orpik was a sensitive sort, he might have locked himself in a closet and not come out until the following spring.

However, whatever sensitivities he possesses, they applied neither to the deal, nor his on-ice potential, at least not in the eyes of theman who would coach him, Barry Trotz…

As it turned out, if you had been paying attention to Orpik’s career in Pittsburgh (and no doubt more than a few Caps fans did), you got more of it in his first season as a Capital.

Assists?  This is actually a bit of an underrated part of Orpik’s game.  Sure, he played with Sidney Crosby and Evgeni Malkin for much of his career in Pittsburgh, but he reached double digits in assists six times in his last seven seasons with the Penguins, the only time he failed to do so being the abbreviated 2012-2013 season.   He had 19 with the Caps in 2014-2015, his second highest career season total (23 in 2009-2010).

Hits? Since the league started compiling that statistic in 2005-2006, Orpik averaged 264 hits per 82 games with the Penguins.  He had 306 for Washington this season.

And, Orpik was something of a good luck charm.  When he did record a point, the Caps were 15-1-1, the losses coming in the last two games of the season in which Orpik recorded a point, one an overtime loss to the Ottawa Senators on April 4th, and the only loss in regulation coming in the last game of the regular season.  Orpik had an assist in the last minute of the Caps’ 4-2 loss to the New York Rangers, the Caps having already clinched a playoff spot.

But about those underlying numbers.  The thinking here was that Orpik was not an especially effective player in the context of possession.  That might be derived by looking at his Corsi numbers over his last two years in Pittsburgh – an aggregate Corsi plus-minus at 5-on-5 of minus-334, a Corsi-for percentage of 45.4, a Corsi-for relative at 5-on-5 that averaged minus-6.0 over those two seasons (numbers from war-on-ice.com).

In his first year in Washington, however, getting top minutes, his numbers improved.  He was still a “minus” player, but only minus-18.  His Corsi-for percentage was still under 50 percent, but barely (49.7).  His Corsi-for relative was still in minus territory, but his best in five seasons (minus-2.4). 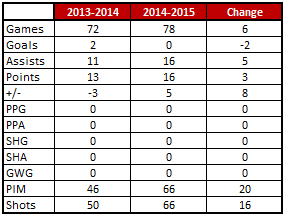 Fearless’ Take:  There are some things that elude quantification that have value.  Three years at Boston College, three Frozen Fours and a national championship.  Two years with the Wilkes-Barre/Scranton Penguins in the AHL, an appearance in the Calder Cup finals.  Ten full seasons in Pittsburgh, eight playoff appearances, two Stanley Cup finals, and a championship.  He does have a certain affinity with winning.  And there is his recognition of his place in the locker room as the mentor, which seems to have manifest itself in terms of his relationship with rookie Evgeny Kuznetsov.  In that respect, he resembles another veteran who helped shepherd a group of young guns on this team a half decade ago: Mike Knuble.

Looking at his ten-game segments, Orpik displayed a startling improvement in his overall Corsi numbers from the first four segments (minus-47, each segment a minus) to the last four (plus-29, each segment a plus).  The change in scoring chances was in the same direction, but not as stark.  What neither did was have much of an effect on goal differentials; Orpik was plus-2 in goal differential over his first four ten-game segments, minus-1 in his last four.

Cheerless’ Take:  Uh, yeah…about that Knuble reference, cuz.  If you’re squeamish, you don’t want to look at his possession numbers over his three years with the Caps.  At 5-on-5…Corsi plus-minus went from plus-155 to plus-38 to minus-153.  Corsi-for percentage went from 54.3 to 50.9 to 44.6.  Corsi-relative went from plus-1.5 to minus-0.5 to minus-4.4.  Orpik did not have a bad set of possession numbers for the Caps, but he, like Knuble before him, could see them trend that way pretty quick.  Those intangibles had better be a lot more tangible pretty soon.

Odd Orpik Fact: Although the Caps had a fine record when Orpik recorded a point this season, he did not have a goal, let alone a game-winning goal.  He has gone 781 regular season games and  15,543 minutes without recording a game-winning goal in his 12-season regular season career.  His only career game-winner was a series-clinching goal in Game 6 of the Penguins’ Eastern Conference quarterfinal playoff series against the New York Islanders in 2013.

Game to Remember: December 27th at Pittsburgh.  Brooks Orpik’s first game back in Pittsburgh as a Capital was a typical illustration of an Orpikian game.  He logged more than 24 minutes for the Caps, including more than four minutes killing penalties.  He did not have a shot attempt, but he did register an assist.  He finished the game with seven hits and a blocked shot.  More important, he finished a plus-3 in what would be a 3-0 win over the Penguins.

Game to Forget: October 14th versus San Jose.  You would like to get off to a good start with the new fans, and having lost the home opener to Montreal five days earlier, Orpik and the Caps wanted to get the home portion of the season on a winning track.  Well, it was a nice thought.  The San Jose Sharks came into Verizon Center and scored three goals in the first 9:34 of the contest.  Orpik was on ice to get a good look at all of them.  The Caps would crawl back to force overtime, but the Sharks would escape with a 6-5 Gimmick win.  Orpik was on ice for all five of the five hockey goals scored by San Jose.

It says something about Orpik’s ability to play within himself and play his game that as the playoffs approach the end of the third round, he is still second overall in hits and tied for sixth in blocked shots as of May 23rd.  His possession numbers were consistent with his regular season performance (49.2 Corsi-for percent at 5-on-5), and his Corsi-relative numbers were impressive in the last four games against the Rangers.  He would, however, find himself on ice for that last goal of the season, though, and for him, as it does for his teammates, it has to sting.

If there was a player who delivered based on expectations for the Capitals this year, Orpik would rank highly on that list.  He has given no evidence of making many contributions over his career in the offensive end, and he was consistent with that profile this season.  When he did contribute, it was meaningful.  He did not contribute empty points.  On the defensive end he had the reputation of playing a rugged game, and he was true to form.  It would be a style that, if it didn’t rub off on his teammates, it was one that the club assumed – the “heavy” style of play discussed often in the season’s latter stages.

Orpik also played the role of wise veteran with knowledge to impart to his younger teammates.  It seems a natural progression for his career, having come from one of the storied programs in NCAA hockey through an NHL organization that had success, and finally to a team that has young skill players who are just learning what it takes to compete and succeed in the NHL.  In that sense, Orpik’s numbers cannot be looked at in a vacuum.  It would be hard to quantify the effects “Batya” has had on players such as Evgeny Kuznetsov or Andre Burakovsky, but both players finished their seasons in strong fashion.  Looking at the numbers for Orpik is one thing, but what you see when you lift your eyes from the spreadsheets looks a bit different.  Whatever one might think of Orpik’s contract in the long term, it would appear that the Capitals got their money’s worth from it in 2014-2015.