Getting Ready for Camp with the Cousins

Well, here we are at last. The vets take their first steps on the long march to a Stanley Cup when training camp starts this weekend, and…

“Aren’t you getting ahead of yourself, cousin?”

"Oh, indubitably. I’m coming to blogging camp in the best shape of my life."

“I don’t want to divulge all of the details, but I can now bench press Roget’s 20 times.”

Cheerless! You’re looking quite fit. Working out this summer?

I can see…it shows.

Uh-huh… So, what do you think of the Caps coming into camp?

“I guess you’d have to say on paper they are the strongest team in the history of the franchise.”

“Well, cuz, for most of the history of the franchise we needed that paper to spread around on the floor cuz they were as crappy as a dog that ain’t housebroke."

“Cuz, you ain’t even said nuthin’ about my new duds.”

Cheerless, I get the red t-shirt and the red cap…but red denims and red shoes?

“I call it my ‘Tribute to Groovy Neuvy.’”

I’m sure he’d appreciate it.

“Don’t, cousin….he’s proud of the ensemble.”

Did either of you guys catch any of rookie camp?

“Yeah, but I was wonderin’…who was the tall guy talkin’ to the goalies?”

“How wuz I supposed to know? It wasn’t as if he had a name plate on him or anything…”

He’s the new associate goalie coach, Cheerless. A lot of new faces around here. You guys have any thoughts on the matter?

“I noted the Caps signed the third player named ‘Joel’ in team history.”

“And the second one named ‘Roman.’”

Very good, Cheerless… do you remember the other one, Roman Tvrdon?

“Oh, I thought it meant Rick Tabaracci for all the roamin’ he did around his crease. But I’ll be even you didn’t know that the Caps have now had two players named ‘Jeff Halpern”’

“Huh? He played against Dmitri Khristich like a thousand years ago…”

“Don’t ask him that again…every time we go out in the car, he's hanging out the window doing that.  It scares the dog.”

Well, it should be a fun ride over the next nine months or so. See you this weekend?

Ah, well…glad to see you’re sticking to that regimen. 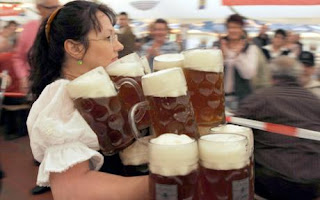