Another lead, another loss. The Washington Capitals lost their fifth straight game last night, this time to the Calgary Flames, 4-3, in overtime. It also represented the fifth straight game in which the Caps could not hold a lead in dropping the decision. It spoiled a night on which Alex Ovechkin became the franchise’s all-time points leader, surpassing Peter Bondra when he assisted on Nicklas Backstrom’s game-tying goal in the first period.

That goal was a game-tying one because Calgary's Lance Bouma opened the scoring at the 9:09 mark when he put back a rebound of a Kris Russell shot. The Caps tied it just 1:09 later when Ovechkin took a pass from Tom Wilson at the left point. He wristed a shot from long range that Backstrom redirected through goalie Jonas Hiller’s pads for the score. For Ovechkin it was his 826th point, passing Peter Bondra for the top spot in franchise history.

Calgary took back the lead mid-way through the second period on Mark Giordano’s fourth goal of the season. The Caps struck back quickly once more, this time just 43 seconds later. It was an odd play. Troy Brouwer fed Marcus Johansson the puck in the neutral zone, and Johansson circled into the Flames’ zone. From the top of the right wing circle Johansson wrong-footed a snap shot that went wide to Hiller’s left. The puck caromed hard of the end boards and rebounded off Hiller into the net for the goal to tie the game for the second time.

Joel Ward gave the Caps the lead three minutes later on a power play. With Calgary skating down two men, Nicklas Backstrom waited patiently for an opening from Hiller’s left. He found it when defenseman Mark Giordano, defending the top of the crease, moved his skate just enough to create an opening for a pass. Backstrom threaded the puck through the opening to Ward on the other side, and Ward fired the puck into Hiller’s pads. Hiller’s left skate kicked the puck behind him and over the goal line to give Washington a 3-2 lead.

For the fifth game in a row, it was a lead they could not hold. Markus Granlund tied the game on the sort of goal a team in a skid like the Caps gives up. From behind the Capitals’ net, Granlund centered the puck in front. Marcus Johansson was there to direct the puck into the corner, but in doing so he shot the puck off the skate of Troy Brouwer and past goalie Braden Holtby into his own net with just 4:10 left in regulation.

In overtime, Sean Monahan ended it in the last minute when he carried the puck into the Caps’ zone, left the puck for Josh Jooris, then took a nice return pass from Jorris, finishing the play and the game by snapping the puck over Holtby’s right pad. It was another quiet exit for Caps fans as the Caps dropped the second half of their two-game home stand, 4-3.

-- Right off the opening draw there was a change.  Mike Green and Brooks Orpik started as a defensive pair.  It did not go well.  Green was on ice for all four Calgary goals and was paired with Orpik for two of them.  Nate Schmidt was Green’s pair for a third, and Matt Niskanen was alongside Green on the overtime winner.

-- That left John Carlson and Schmidt as the next pair of defensemen to take the ice.  That one worked better, if only by the default that Green and Orpik (or Green and whoever else) worked so poorly.  Carlson recorded an assist on Johansson’s goal, making it four straight games in which he recorded a point. 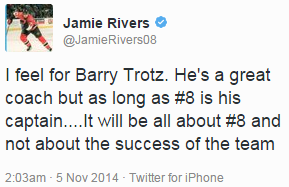 -- Ovechkin had two assists in taking over the top spot in career points with the Caps.  Nevertheless, he still inspires in a different way…

-- Calgary leaned heavily on four defensemen.  Kris Russell, Mark Giordano, Dennis Wideman, and T.J. Brodie all topped 25 minutes in ice time.  Ladislav Smid had barely 13 minutes, and Deryk Engelland didn’t make it to 12 minutes.  He did have a fight, though (his 38th career bout, Liam O’Brien’s third), so there was that.

-- Jason Chimera skated a team low 12:22 in ice time.  That’s four straight games under 13 minutes for Chimera.  He has just one point in his last seven games (none last night) and he has gone seven games since scoring his only goal of the season.

-- Tom Wilson got another point.  That makes points in consecutive games, the first time since he  accomplished the feat since last Janaury against New Jersey and Montreal.

-- You hold a team to 11 shots, total, over the last 20 minutes of regulation, you really should win.  The third goal was a fluke, but that awkward looking backhand by Giordano… that’s the kind of goal that is nullifying all the good work the Caps are doing in holding shot attempts and shot totals down.

-- That was the third game this season that the Caps lost when taking a lead into the third period.  No team has lost more games (San Jose and Colorado also have three losses).

Barry Trotz said the other day that if you get to three (meaning goals scored), it should be enough to win in this league.  The Caps are just 3-2-2 when getting to three, and they got to three in each of their last three losses.  In football, quarterbacks take an out-sized share of credit for wins and blame for losses.  The same with goalies in hockey.  However, Braden Holtby is under .900 in save percentage in four of his past five games, despite facing fewer than 25 shots in four of them (23 last night).  He has yet to face 30 shots in a game in nine appearances, yet his overall save percentage is .891.  Of 37 goalies appearing in at least five games, Holtby’s even strength save percentage of .887 ranks 36th.  There is the odd fluke goal in there, but a lot of good work is going to waste because not enough pucks are being stopped.  With Chicago next up, the task in doing so is not going to get easier.

Posted by The Peerless at 6:47 AM No comments: