On the frozen tundra of Kettler Capitals Iceplex… two squads faced off with malice in their hearts and visions of the Duchesne Cup dancing in their heads.

Group B, a collection of skilled skaters and indomitable netminders took on the gritty grinders and hardnosed (owing largely to their masks) goalies of Group C. The teams spent the early minutes of the first period probing for weaknesses, which given they have sticks can be a rather painful undertaking. But like lightning flashing and thunder rolling, the blue-clad Group B squad took a 2-0 lead on a difficult shot from near the goal line by Matt Bradley and a stuff-in off a rebound by Brooks Laich. Call it “Rise of the Grittinators.” Group C carried the play for most of the period, peppering goalie Semyon Varlamov frequently, so there was some justice in the result of the opening 20 minutes.

After calm settled on the ice, and the gentle hum of the Zamboni announced the laying of a new ice sheet, the teams exchanged ends and resumed battle. Group B apparently found some measure of “git after it” in the locker room, as they took the ice with a renewed sense of urgency, realizing that the treasured Cup was perhaps slipping from their grasp. Group B tied the match at two, the second goal coming as a result of some hard work on the part of Andrew Gordon. But Keith Aucoin restored the Group C lead shortly before the second intermission when he collected the puck at the Group B line and skated in alone to net the breakaway tally. At the second stoppage, it was 3-2, Group C.

The third period saw a significant uptick in intensity from both squads, with spirited hitting along the boards by both teams. David Steckel, though, took matters into his own hands for the Group C skaters with a goal to give the bluejerseys (we won’t think to call them “blueshirts,” and thus incur the wrath of Caps fans) a 4-2 lead.

But Andrew Gordon made things interesting by getting another happy result of hard work, potting a goal to close Group B to within one at 4-3. Group B enjoyed a power play with under three minutes to play in regulation, but could not find the equalizer. Group C killed off the penalty and the remaining seconds to hang on for a 4-3 win and a leg up in the chase for the Duchesne Cup.

First Star: Andrew Gordon (two goals and a lot of sticking his nose in the crease and along the boards)

Second Star: Matthieu Perreault (two assists, and he could have had more; he was the most dangerous player on the ice)

Third star: Sean Collins (he wasn’t playing like a guy fighting for a job, which we mean as a compliment – he was playing a simple, effective game at moving the puck out of trouble)

- David Steckel and Greg Amadio almost got into a shoving match deep in the banner end of the ice.

- Michal Neuvirth didn’t have a lot of work in the first period, and what shots did come his way seemed to hit pipes and the outside of the net.

- Speaking of hitting pipes, Boyd Kane had an open net a couple of times and could only manage hitting iron.

- Anton Gustafsson still looks a little like he’s struggling with the smaller rink dimensions. But he was throwing his body around more in the third period.

- For a guy who has one foot out the door and his car keys in his hand, Michael Nylander was at least competing out there. Yes, there were the curl-offs and circles, but Caps fans… that’s the way he plays. Move on.

- Quintin Laing might have a path to an opening night roster spot, owing to the top-two lines being more settled than the checking lines. And he was out there playing like he knew it, providing a lot of hustle.

- There were two distinct kinds of players out there, even with the competition of the Duchesne Cup. There were the guys fighting for jobs, like the guys who played in Hershey last year. And there are guys getting ready for the season and looking to establish some familiarity and chemistry, like Alexander Semin and Brendan Morrison.

And now, some pictures from the proceedings… 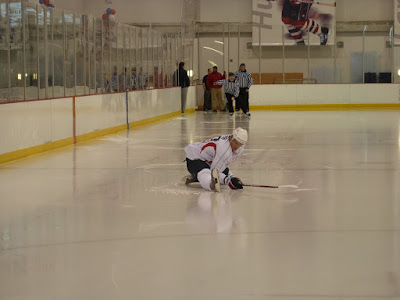 A nice new ice sheet... allllll to myself 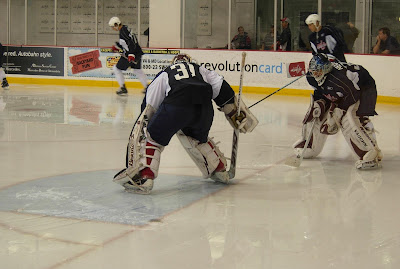 Handymen Jason Bacashihua and Michal Neuvirth apply their tools to some interesting ice in front of their crease... 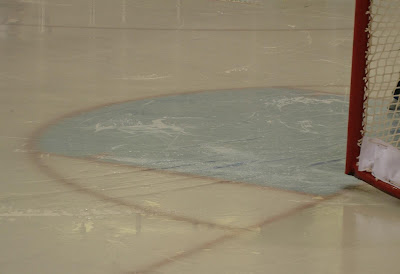 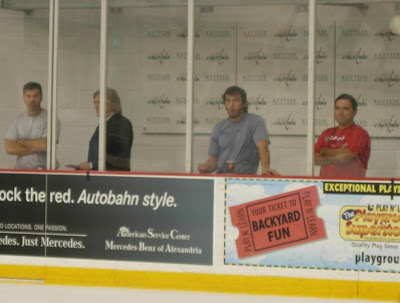 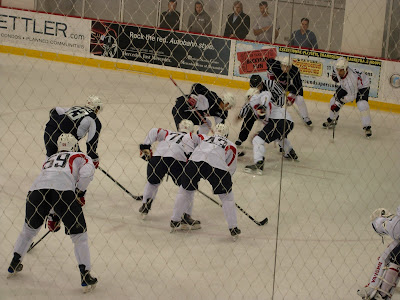 Nice shot of the net, pal. 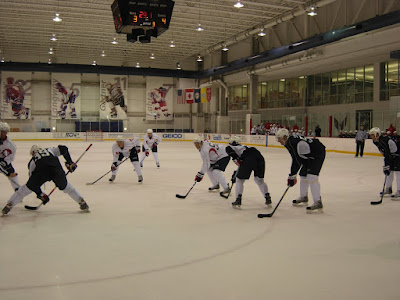 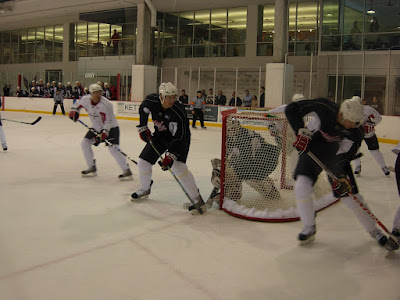 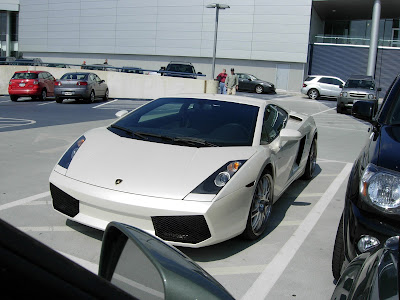