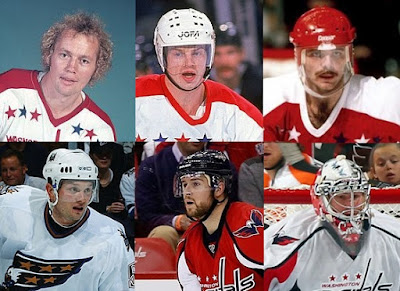 If there were some unremarkable teams among the A-F squads, the “All-G Team” published in 2014 does not suffer that problem.  The “All-G Team” includes some of the highest ranked players across statistical categories in team history:

Compare these four players with those whose last names begin with the letter “G” playing for the Caps since the 2014 team was published:

None of these players will replace any of the four listed above.  But what of Stan Gilbertson at left wing?  Would Shane Gersich or Curtis Glencross be suitable replacements?

Gilbertson was a reasonably productive player in 56 games over two seasons with the Caps, posting a scoring line of 24-21-45 for a couple of historically bad teams.  Not only would neither Gersich nor Glencross have merit as a replacement, the six players listed above having dressed since the summer of 2014 have combined for a scoring line of 7-22-29 in 132 games.  The skaters from the 2014 “All-G Team” would remain intact.

The 2014 version of the “All-G Team” is a formidable group.  The five skaters combined for 873 goals and 2,164 points in 2,672 man-games in the regular season and had 47 goals with 137 points in 201 man-games in the postseason with the Caps.  Philipp Grubauer was – and remains – one of the most effective goaltenders in Caps history when one remembers he played in barely 100 games for the club (101).  It is a squad that will remain intact, at least for now.