The Peerless Prognosticator is ON THE AIR!!! -- Caps vs. Maple Leafs, December 6th

The Caps finish up the first half of their four-game home stand by hosting the Toronto Maple Leafs tonight at Verizon Center. As any hockey fan knows, the Leafs come into the game having not won a Stanley Cup since 1967, the longest drought among “original six” clubs in the NHL (in fact, the Leaf’s Cup-clincher was the last game of the “original six” era, the NHL expanding the following season). How long has it been since 1967? Well, in 1967…

-- There had not been a “Super Bowl” yet played. Oh, they played a game that would become the “Super Bowl,” but it was only referred to as a “World Championship Game. And, there was only the one of them played when the Leafs last won a Stanley Cup.

-- The Apollo manned space program had not yet launched a mission. It would be more than a year until its first manned mission and more than two years until men walked on the moon.

-- Elvis Presley and Priscilla Beaulieu had just been married.

-- The “Monkey Law” (actually, the Butler Act, under which John Scopes was prosecuted for teaching evolution) was repealed in Tennessee about two weeks after the Leafs skated with the Cup.

-- The first live, international satellite television production had not yet been aired. That would come about six weeks after Toronto won the title.

-- Canada had not yet celebrated 100 years of confederation. That would come two months after the Leafs won the Cup.

-- Ten weeks after the Leaf’s title, the town of Winneconne, Wisconsin, announced secession from the United States because it was not included in official maps. The town declared war. Secession was repealed the next day.

-- The first “pulsar” had not yet been observed by astronomers (that happened in November).

-- The first heart transplant had not yet been performed (that came in December).

-- The supersonic aircraft “Concorde” had not yet been introduced (that came in December, too).

-- The term “black hole” had not yet been adopted to describe the astronomical phenomenon. John Wheeler popularized the term in a lecture in December 1967.


The Maple Leafs come into Washington as the most pitiful bunch of twenty-somethings you would ever want to see. Take a look at the overall numbers to see why… 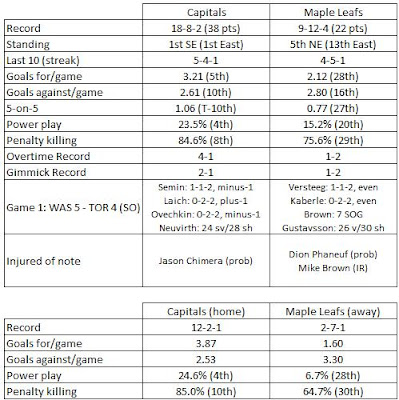 Twenty-eighth in scoring, 27th in 5-on-5, 20th on the power play, 29th in penalty killing, 28th in road power play efficiency, and last in road penalty killing. It adds up to 22 points. This is not a strong team.

It gets worse. The Leafs actually started the season 4-0-0. But even there, the faint whiff of doom was in the air. Three of the games were of the one-goal variety, so they were playing rather close to the margin. They have tumbled down the mountainside since, going 5-12-4.

And still, it gets worse. The Leafs have played ten road games this season. In their first two they scored a total of eight goals. In eight games since… eight goals. They have been shutout four times in those eight games. They haven’t scored a power play goal on the road since getting one against the Caps on November 3rd (five games). In their last eight road games the Leafs have killed only 15 of 26 shorthanded situations (57.7 percent).

People in towns the Leafs visit create traffic jams going to the airport to offer them rides into town.

Clarke MacArthur, Mikhail Grabovski, Nikolai Kulemin. You heard of these guys? Well, meet the top three Maple Leafs scorers so far this season. None of them have 20 points, none of them have ten goals. They have a combined ten multi-point games (Alex Ovechkin has ten such games by himself). In 26 combined games over their respective careers against the Caps, this trio is 6-7-13.

Phil Kessel leads the Maple leafs in goals with ten, but his has three in his last 17 games, one his last seven road games. Odd Kessel stat… he has had one “plus” game in those last 17 games (minus-9 overall). In 14 career games against the Caps he is 3-5-8.

The four players we have mentioned thus far have a total of four career goals against the Caps in 21 combined games with Toronto. You have the feeling the Leafs might have to do this with defense.

On that score, so to speak, defenseman Dion Phaneuf was cleared for action this week after sustaining a leg laceration in a game against Ottawa on November 2nd. When the Leafs entered that game they were 5-4-1. They are 4-8-3 since. Coincidence? Maybe. But it cannot have helped having to play rookies Keith Aulie and Korbinian Holzer during Phaneuf’s hiatus. Despite the fact that Phaneuf has only 14 points in 37 games as a Leaf, he does pose an offensive threat from the blue line that is lacking, especially since Tomas Kaberle has no goals in 25 games so far (he does have 12 assists). And, Phaneuf does have that truculent streak that can put opponent’s heads on a swivel when he is on the ice.

Jonas Gustavsson was the goaltender of record in seven straight decisions before Jean-Sebastien Giguere beat the Bruins in a shootout on Saturday. Given that Gustavsson allowed a total of 12 goals on 85 shots over his last four appearances (.865 save percentage), that Giguere was strong in his last appearance, and that despite only a 3-3-1 record against the Caps in his career has a 2.18 GAA and .932 save percentage with two shutouts, Giguere might be the pick here. One hopes, if you’re a Leafs fan, that the Boston game on Saturday was the start of a groove. In his previous four appearances he was 1-2-0, 4.52, .845.

The one Blackhawk that didn’t make it to Atlanta, it seems, Versteeg is what passes for hot with the Maple Leafs at the moment. He has two goals and an assist in his last three games (during which Toronto had only five total goals), six goals in his last nine games. Versteeg has two goals in three career games against Washington.

Game Over Green has 76 career goals in the NHL. Only two of those have come at the expense of the Toronto Maple Leafs in a total of 20 games. One of those came in the first meeting of the clubs on November 3rd. Against Atlanta on Saturday Green had a lot of good looks at the net – six total shots on goal – but none found the back of the net. Sometimes, a hitter needs to start hitting line drives before they start falling in. Green hasn’t had a goal in more than three weeks (November 14th against Atlanta). Tonight has a good feel to it.

1. Make them play to YOUR level, don’t play to theirs. Too often, the Caps seem to take these kinds of games – a weeknighter against a weak team – for granted. They certainly seemed to do that in the first game these teams played (on a Wednesday night), a 5-4 Gimmick win that should have been over at the second intermission when the Caps had a 3-1 lead. The Caps actually surrendered the lead in the third period before Alexander Semin tied things up with a power play goal with just over five minutes to go. But despite the problems the Leafs have and the potshots that some take (including us), it is a proud franchise.  Take them lightly, and this will be an unpleasant evening.

2. Quality, not Quantity. We covered this in an earlier scribble, noting that sometimes lots of shots doesn’t really mean “LOTS OF SHOTS!” Toronto allows the sixth fewest shots on goal per game in the league, but their team save percentage is only .900. They do give up chances.

3. Get ‘em early. Toronto actually has a rather respectable third period goals-against record. Only five teams have allowed fewer goals in the final frame than have the Maple Leafs. But in the first period? Toronto is being outscored 25-14 over 25 games. Don’t let these guys feel good about themselves.

In the end, this game is a mismatch on paper. You would have thought that way before the first game, too. You would have thought that way after the Caps posted a 3-1 lead after 40 minutes of that game. Then they had to scratch and claw to tie the game late and push it to a Gimmick. The Caps continue to display a disconcerting tendency to play down to an opponent’s level of play, particularly weak teams from other divisions (a 3-2 overtime win over Ottawa, a 2-1 loss to Minnesota, a 3-2 overtime loss to Buffalo, a 5-0 loss to New Jersey with a backup goalie in net). These are tests of mental discipline as much as anything, and it is one thing the Caps seem to lack from time to time. You could put Maple Leaf jerseys on a pack of dachshunds, and it ought to be a big game with the leaf logo on the outerwear. If the Caps treat it that way (the game, not the Leafs like a pack of dachshunds), this game should not be close.