The Peerless Prognosticator is ON THE AIR!!! -- Game 67: Washington Capitals at Los Angeles Kings, March 11th

After stumbling in the first game of their three-game California road trip, a 4-2 loss to the San Jose Sharks, the Washington Capitals head south for a back-to-back set of games in Southern California. First up is a visit to Staples Center and the Los Angeles Kings on Saturday night.

As for the Kings, they come into this game on a slide of poor timing. Starting with their 5-0 loss to the Caps on February 5th, Los Angeles is just 5-7-2 in their last 14 games. Offense has been an issue over that span, scoring just 31 goals (2.21 per game), six of them in a 6-3 win over the Florida Panthers on February 9th. Defense has been every bit as much an issue with the club allowing an uncharacteristically high 43 goals (3.07 per game) in that 14-game stretch.

While the Kings are not a prolific offensive club, the dropoff in scoring should nonetheless be a concern. And that points right away to their top goal-scorer, Jeff Carter. Goal scorers can be a streaky species, and Carter is no exception. He happens to be in an inopportune cold spell, having scored just three goals in this 14-game stretch (one in his last 11 games) after recording 13 goals in the 21 games before that. And as Carter scores, so score the Kings as far as standings points go. Los Angeles is 18-2-3 in the 23 games in which Carter recorded a goal this season, 14-26-3 in the games he did not. The Kings have yet to lose a game in regulation this season when he scores on home ice, going 11-0-1. Carter is 11-13-24, plus-1 in 29 career games against Washington.

Only one other King has cleared the 20-goal mark this season – Tanner Pearson. Just in his fourth season in the NHL (30th overall pick in the 2012 entry draft), Pearson is a player who just keep improving. He has improved his goal scoring from year-to-year (from three to 12 to 15 to 22 this season), and points (from 7 to 16 to 36 to-40 this year). He seems certain to post a career-best in assists (he has 18, three short of the 21 he had last season). He has been very productive of late, despite the team’s overall sluggishness. In the Kings’ last 14 games he is 7-7-14, plus-1. He has a couple of odd splits among his splits this season. Both at home and on the road he is 11-9-20. And, he has 12 goals in 32 wins, 10 in 32 regulation and extra time losses; the difference is in setting up others to score. He has 15 assists in 32 wins but just three in 32 regulation and extra time losses. In five career games against the Caps, Pearson is 0-2-2, minus-3.

Quick, who leads the Kings’ defensemen in scoring? OK, it’s not a trick question; the answer is Drew Doughty. But Alec Martinez is just four points (33) behind Doughty. And all that will well and good, but there is that minus-15 sticking out like a sore thumb (which pairs nicely with Jake Muzzin’s minus-20, making them the worst pair on the club in plus-minus by far). Still, Martinex has quietly become a steady and reliable source of scoring from the blue line. His 33 points this season is a career high, topping last year’s 31 points, which topped the previous year’s 22 points. He has a career best in assists (25), and with a late push he could match or surpass his career best in goals (11; he has eight at the moment). Martinez certainly loves home cooking more than take out on the road. He is 6-17-23, even, in 31 home games, but just 2-8-10, minus-15, in 35 road games. Martinez is 0-2-2, minus-1, in eight career games against the Caps. 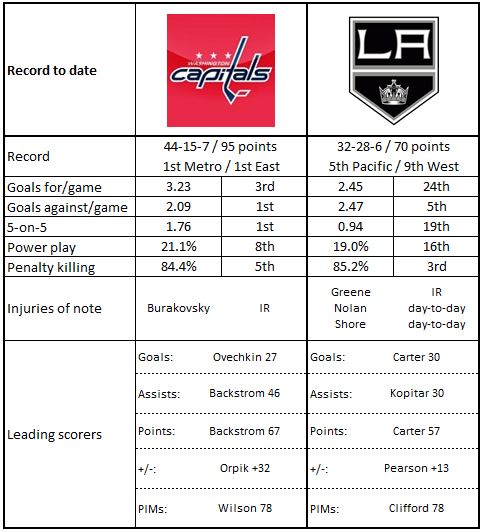 1.  They have been shut out three times in that span and held to a single goal on two other occasions, but all three shutouts and one of the one-goal efforts came in the first eight games of that period. Over their last six games they have 17 goals, a much more respectable total.

3.  On the other hand, their even strength goal ratio has been nothing short of awful. They have been outscored, 40-20, at evens over those 14 games.

4.  The Kings hold a whopping 460-379 shots on goal advantage over those 14 games. Nine times in that span did they outshoot their opponent, five times by more than ten shots and twice by more than 20. Oddly enough, in both instances when they enjoyed a 20+ shot advantage over an opponent, they lost. They were plus-22 in shots in a 5-3 loss to the Arizona Coyotes on February 16th, and they were plus-23 in a 4-3 loss to the Vancouver Canucks on March 4th.

5.  Despite a reputation and a big and brawny team, they played within the rules over those 14 games, facing only 32 shorthanded situations (2.29 per game) while enjoying 40 power plays of their own (2.86 per game).

1.  Daniel Winnik’s next goal will be his tenth, which would give the Caps 11 players with ten or more goals this season. They had only eight last season.

3.  The next power play points for T.J. Oshie and Matt Niskanen will be their tenth, which would give the Caps seven players with ten or more power play points this season. That would equal the number they had last season.

Jonathan Quick has had one of those season that started out as one he might want to forget but might be one he’ll end up remembering more fondly. He opened the season in goal for the Kings but last just one period on Opening Night, sustaining a groin injury that would keep him out for 59 games. He returned to the lineup on February 25th, and it would appear he is well. Since his return he is 3-0-1 (an overtime loss to the Minnesota Wild), 2.41, .918, holding three of the four opponents to two or fewer goals. Quick, while not an appreciably more efficient goaltender on home ice over his career (a .916 save percentage versus .915 on the road), has been a more effective one (2.11 goals against average versus 2.44 on the road, a product of facing lower shot volumes). His career numbers against the Caps are consistent with his career totals overall – 6-2-0, 2.44, .916.

Since scoring goals in three straight games to close January and open February, Alex Ovechkin has two goals in 15 games. In the 13 games in which he did not record a goal, the Caps are 9-4-1, which says something about the depth of the club, but it has a whiff of living on the edge, too. It’s like a high performance aircraft going into a stall and plummeting back to earth. You know that you have a lot of power in those engines, but you really don’t want to test the proposition of waiting until the last second to relight them. The question is becoming one of whether Ovechkin, if he is conserving energy in an effort to pace himself, can re-light that engine as we head into the daylight savings time portion of the schedule. The other obvious explanation of his recent slump, that there is an injury of which nothing is being spoken, is something Capitals Nation does not want to contemplate. Let’s go with “he’s pacing himself.” Ovechkin is 5-8-13, minus-3, in 14 career games against Los Angeles.

The good news, one supposes, is that the Caps will not fall out of first place in the league standings by the time their west coast trip is over, no matter what happens in their last two games of the trip. But still, this is not a team firing on all cylinders since the February break, as we noted elsewhere.  It has been a team that is sluggish across its forward lines and defensive pairs in putting together a lackluster 5-4-1 record since the break. One gets the impression the Caps are a team searching for that spark they had before the break and feeling a bit confused that they haven’t found it.  Part of working through a long regular season is managing those uncomfortable times and making them as brief as possible. This might not be the easiest opponent against which to do that.