On Tuesday morning, The Boss said this in an interview with a local sports talk radio station:

"My goal is I just want to qualify for the playoffs. I don't think it matters how many points we finish with. I want us to enter the playoffs playing the right way and being healthy....I think our guys may be unconsciously pacing themselves a little bit, I do. I think that. (emphasis added)"

Well, let's take a look at that for a moment.  Twenty-one games is about one quarter of an NHL season.  It is also the number of games the Capitals have played since Thanksgiving.  Consider this set of numbers:

This happens to be the individual and combined offensive output of Alexander Semin, Alex Ovechkin, Nicklas Backstrom, and Mike Green, respectively, over the past 21 games played by the Caps.  If you were to project that output over a season, it would look like this...

Those 56 goals scored by these four players combined -- the heart of the Caps' offense -- represents the average number of goals scored per 82 games by Ovechkin alone over his career coming into this season.

And here is something else to ponder.  In these 21 games since Thanksgiving the Caps are 9-7-5.  If they continue that "pace" over the last 38 games of the season they will finish with 97 points.  It might sound like a lot; it would have, in fact, been the fifth highest standings point total in the Eastern Conference last season.  But the eighth-place Atlanta Thrashers over their first 45 games this season are on a 93-point pace.  And ninth-place Carolina is on a 92-point pace over the season thus far, although at the pace of their last 21 games they would finish with 96 points.

Maybe in the last 21 games of the season the light will come on, and the Caps will make that push toward the playoffs, getting their game rounded out for a deep playoff run.  Can anyone really count on that, though?  The point here is that while one has to believe this team is simply too good and too talented to coast through the rest of the regular season, the pace at which the Caps are securing standings points puts them in danger of pacing themselves right into tee times in April.  And snapping out of it has to start with this quartet of players.  Otherwise, the Southeast might send three teams to the playoffs, and the Caps might not be one of them.
Posted by The Peerless at 10:24 AM 1 comment:

The Peerless Prognosticator is ON THE AIR!!! -- Caps vs. Canucks, January 14th 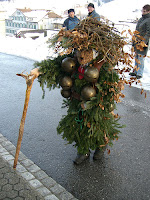 You have my attention.

“I go from house to house singing and ringing my bells and wishing folks a happy new year.”

New Years was two weeks ago, and we celebrated in Pittsburgh.

Sorta like that Fahrenheit – Celsius thing, but different, right?

So, what about this…

Yeah, you sing and ring your bells and wish folks a happy new year, right? And what do you get out of it?

“Sometimes folks give me food, or maybe drink, or even money.”

Well, the Caps could use some “happy new year” mojo, because what they had coming out of the Winter Classic seems to be wearing off. Since beating the Penguins on New Year’s Day, the Caps are 1-1-2, have scored a total of six goals in the four games and have been shut out twice – both times by the same goaltender.

Dwayne Roloson will not be starting for Vancouver tonight. But Roberto Luongo will be. Cory Schneider – Vancouver’s backup – played heroically last night, stopping 34 of 35 shots in a 1-0 loss to the New York Rangers that ended the Canucks’ 17-game points streak (14-0-3). All that means is that the Caps get an angry Canuck team…and Luongo. The number one Vancouver netminder is 16-10-3 lifetime against the Caps with a 2.26 GAA and .929 save percentage with two shutouts. He has not lost a game in regulation since December 5th, and since then he is 9-0-2, 1.94, .943. He has allowed more than two goals only three times in those 11 games. If there is a silver lining for the Caps, he is very mortal on the road this year – a 2.60 goals against average and a .909 save percentage.

Although the Canucks were stingy in their 17-game points string, giving up barely two goals a game (2.11 to be precise), they haven’t lacked for offense, either. Here is how the total number picture unfolds compared to the Caps: 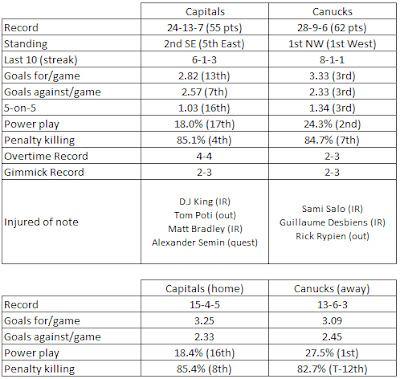 Ryan Kesler was the subject of a story a couple of days ago depicting him as a dark horse Hart Trophy candidate. He is Twice a Prince to Sidney Crosby’s Secretariat at the moment (points for those of you understanding the analogy), but Kesler is having a great year. He is third on the team in total scoring (41 points) and is second in goals (24). He is a mortal lock to surpass his career best in goals (26, set in 2008-2009) and is likely to surpass his career best in total points (75, set last season). In the 17-game points streak for Vancouver, Kesler had 14 goals, including a pair of hat tricks, and did not have a minus-game (plus-14). Might want to pay attention to him, too.

Mike Green might be the best offensive defenseman in the league, and even if he is having a “down” year in that regard this season (8-13-21), he leads the Caps’ defensemen in scoring. Vancouver has two defensemen with more points than Green – Alexander Edler (4-21-25, all four goals coming on the power play) and Christian Ehrhoff (6-17-23, half of his goals coming on the power play). They have four defensemen with at least a dozen points, and none of the six defensemen who have dressed for at least 30 games in a Vancouver uniform this season is a “minus” player.

Talk about an under-the-radar player. In his first season with Vancouver, Torres is third on the team in goals (11), including four game-winners. He has slowed down some, though, going his last seven games without a goal, three in his last 21 contests. If he wakes up tonight, it won’t be good for the Caps. He does not have a lot of experience against Washington – six games, three goals (one a game-winner).

Varlamov was occasionally – make that “often” – brilliant in the Caps 3-0 loss to the Tampa Bay Lightning on Wednesday, stopping 35 of 38 shots, many of the saves from point-blank range. A couple of bad breaks, compounded by poor defensive play, doomed him to the loss. He won’t be getting any breaks tonight. The Canucks might be coming in right after a game last night, but this is the best team he will face so far this season. It will be the irresistible force (Vancouver) meeting the immovable, or at least the impenetrable object. Varlamov has a 1.57 goals against average at home this season with a .941 save percentage.


1. Today’s Letter is “D.” Vancouver gets offense from its defense. The blueliners have a total of 22 goals, nine of them coming on the power play, and the group has three game-winners on their collective resume. Pay attention.

2. Look in the Mirror. Vancouver is last year’s Caps. Third in scoring, third in 5-on-5 play, second on the power play. If the Caps are going to get a test of their newfangled “defense-R-us” approach, well, tonight will be the biggest test of all so far.

3. If you’re not the lead dog… No team in the NHL has fewer losses in regulation after scoring first than do the Caps (one). The trouble is, the Caps have taken the first lead only 17 times in 44 games. They did it 52 times in 82 games last season. If the Caps trail first in this one, it might be an early night. Vancouver is 24-1-3 when scoring first.

In the end, this might have been billed as a potential future Stanley Cup final matchup. Washington isn’t really playing well enough to make that claim credible, but they can rejoin the conversation with a win tonight. Don’t let last night’s game in New York dull the luster of a win, should the Caps get it. That loss last night in Madison Square Garden had all the look of a matter of looking ahead to tonight’s game. The Caps will have Vancouver’s complete attention. The Caps had better return the favor.