The Peerless Prognosticator is ON THE AIR!!! -- Game 68: Capitals at Sharks, March 10th

After losing two games on their three-game trip west, and scoring just one goal in 120 minutes, the Caps wrap up their journey with a visit to San Jose on Saturday to take on the Sharks. For you Caps fans of recent vintage, San Jose is not exactly saving the best part of the trip for last. Here is the complete history of the Caps in “The Capital of Silicon Valley, (seriously, that’s the town’s motto)” courtesy of the folks at hockey-reference.com: 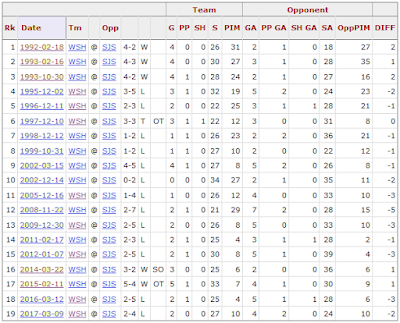 The Caps are facing this considerable head wind while trying to end what is now a four-game road losing streak in which they have been outscored, 15-4. Their lone win in their last six road contests was a 3-2 squeaker over the Buffalo Sabres, and if one goes back one more road game, to the 7-1 pasting they took at the hands of the Chicago Blackhawks, the Caps are 1-5-0 in their last six road games and have been outscored, 24-8.

Meanwhile, the Sharks “streak” on. As in, goes hot and cold, often. They started calendar year 2018 with a win in Montreal over the Canadiens, but here is their record since, broken into their streaks:

Only in their last two games – a loss to Columbus and a win over St. Louis in their last outing – have they given any recent indication of breaking the spell for good (or bad).

The Sharks are a very average team on offense (2.90 goals per game/15th in scoring offense on Friday morning), and they have but one 20-goal scorer at the moment. That would be Logan Couture, who appears to be breaking free of some recent history. He recorded 30-goal seasons in his first two full years in the league, finishing second in the Calder Trophy voting in his rookie year, and he had 21 goals in the 48-game abbreviated 2012-2013 season. However, in four seasons since, he did not record more than 27 goals and averaged 27.1 goals per 82 games played. He was a reliable mid-20’s goal scorer, but not elite in that class of player. And, he was injury prone, missing 56 games over those four seasons to a variety of injuries (hand, lower body, fractured leg, and mouth among them).

This season, however, Couture has dressed for 63 of the Sharks’ 67 games, missing four games in December to a concussion. In those 63 games he has 27 goals and is on a pace (33) to eclipse his career best of 32 goals in his rookie season of 2010-2011. He has been like the club as a whole, a bit on the streaky side. Couture has had six separate instances this season when he scored goals in two or more consecutive games, two of them coming in his last eight games when he alternated consecutive games with goals and consecutive games without them. If the pattern holds, he will pot one against the Caps, having gone without one in his last two contests. Couture is 4-6-10, plus-1, in 12 career games against Washington.

Brent Burns is a helper. Only Dallas’ John Klingberg has more assists this season among defensemen (49) than Burns (43, tied with Erik Karlsson). Not that this should be surprising; Burns has topped 40 assists in each of the last four seasons, including this one. What he is on a pace to do, though, is top 50 assists for the first time in his career. What has dropped off, from last year to this, is his goal scoring. Burns finished last season with a league-high, career-best 29 goals. This season he has only 10 in 67 games. At even strength, the drop-off is from 21 goals to five. Earlier this season he went 21 games between even-strength goals, and while he did have a pair in February, he does not have one since February 15th in a 4-1 win over the Vancouver Canucks. It was his last goal of any kind, his streak having reached nine games without one. Burns is 6-9-15, plus-2, in 15 career games against the Caps.

Martin Jones is one of those under the radar sorts of goaltenders. Maybe it’s playing on the west coast with all those late starts, and perhaps it’s he has a dull name…”Martin Jones”…not even with the French pronunciation of “Martin” (mar-TANH) like that of Martin Brodeur. But here is your odd Martin Jones fact of the day. Only Braden Holtby and Jones have received Vezina Trophy votes as the league’s top goaltender in each of the past two seasons. That’s right. Not Carey Price (once), not Sergei Bobrovsky (once), not Henrik Lundqvist (not at all). And over those two seasons, plus this one, Jones has the sixth-best goals against average among the 41 goalies with at least 5,000 minutes played (2.37, better than Holtby’s 2.38), and only three goalies have more shutouts than his 12 (Devan Dubnyk, Pekka Rinne, and Tuukka Rask each have 14). But there is the matter of shots faced. He doesn’t generally face a heavy volume, an average of 28.1 per 60 minutes over those two-plus seasons. Only 21 times in 177 games played over that span has Jones faced 35 or more shots in a game. He has been effective lately, going 7-3-1, 2.00, .935, with one shutout. Jones is 4-1-0, 2.35, .921, with two shutouts in five career appearances against the Caps. 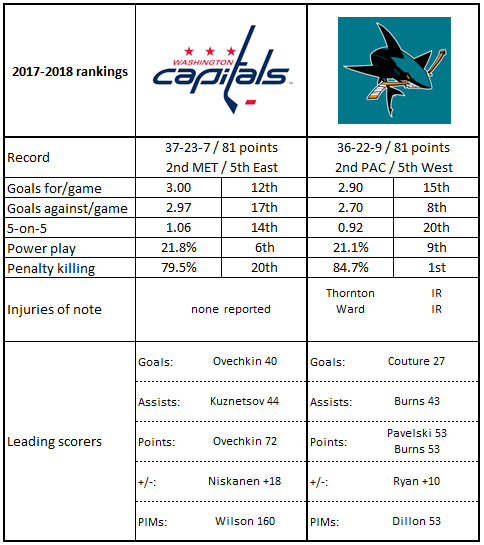 1.  San Jose might have a lack of top-end goal scoring this season, but they do spread the points around. Of the 26 skaters to dress for the Sharks this season, 19 have at least ten points. Paul Martin is the only one of the 26 not to score at all (no points in three games). Even Eric Fehr – yes, that Eric Fehr – has a point (as in one, in six games).

2.  More on spreading things around. The Sharks have 17 different players with game-winning goals. Mikkel Boedker leads with four. No Shark with more than three goals scored this season is without a game-winner.

3.  Get a lead on this team. San Jose is one of only two teams in the Western Conference (St. Louis is the other) not to have lost a game in regulation when leading after two periods this season. They are 25-0-2 in such games.

1.  And now, a glimpse at the difference between “efficient” and “effective.” The Capitals have 19 players who have skated in at least 41 games this season. Of that number, 12 have shooting percentages over 10 percent. This is “efficient.” The Caps are averaging 3.00 goals per game. That ranks 12th in the league in scoring offense. This is not particularly ”effective.”

2.  The Caps have not been quite as blessed, health-wise, as last season, but they have had good fortune in one respect. Of the five players who regularly skate as top-six forwards (Alex Ovechkin, Evgeny Kuznetsov, Nicklas Backstrom, Tom Wilson, and T.J. Oshie), the group has missed a total of 16 games, six of them by Oshie.

3.  Alex Ovechkin has almost lapped the field in terms of shots on goal on this roster. He has almost 100 more shots on goal (284) than John Carlson (187) and 132 more than the next highest forward (Kuznetsov…go figure…with 152).

4.  Caps road work needs, well, work. Only four skaters have a positive plus-minus in away games this season, and one of them (Taylor Chorney, club-best plus-5) is gone. Ovechkin is plus-4, Dmitry Orlov is plus-2, and Christian Djoos is plus-2. The odd ducks in this statistic?   Matt Niskanen (plus-18 at home, even on the road) and Lars Eller (plus-10 at home, minus-8 on the road).

5.  Overtime is a fickle creature. The Caps were 9-3 in their first dozen games settled in extra time this season. However, they are 0-4 in their last four, part of the 10-10-4 slump they are in since January 9th, when they won a third straight game. Since that time, the Caps are one of only three teams in the league without an extra time win (Carolina and Montreal are the others).

Every so often an NHL player is held up as being the next rival for Alex Ovechkin’s dominance in goal scoring in the NHL. Corey Perry was one such player after he led the league with 50 goals in 2010-2011. He faded, having just one season with more than 35 goals in his last six years (including this one, in which he has just 14). Steven Stamkos was another after he had two 50-goal seasons in three years, the latter the first with 60 goals since Ovechkin did it with 65 in 2007-2008. Joe Pavelski did not have quite the top-end sort of season Ovechkin or the others had, but he established himself over a five-year period among the most reliable goal scorers in the league. From 2011-2012 through 2015-2016, Pavelski recorded 163 goals, third behind only Ovechkin (224) and Stamkos (193). However, he dropped to 29 goals last season, the first time since 2010-2011 that he did not finish a full season with at least 30 goals, and he has 18 in 67 games this season, a pace to finish with 22. Since he scored two goals in each of two consecutive games in early February, he has four in his last 12 games. If there is something to beware of with Pavelski, it is that all of his 11 multi-point games this season have come on home ice. Pavelski is 8-9-17, plus-6, in 16 career games against Washington.

John Carlson has made the top-ten rankings among defensemen in the NHL this season his own personal playground. As of Friday morning, Carlson’s rankings included:

Carlson has already tied a career high with 12 goals, and he is within two assists and two points of career highs (43 and 55, respectively, set in 82 games in 2014-2015). He has become a much more assertive player in the offensive end, demonstrated by his 384 shot attempts, just ten short of his career high of 394 in 2014-2015, a season in which he received votes for the league all-star team (finishing tenth in the voting), Norris Trophy (10th), and the Lady Byng Trophy (56th). His production has not waned as the season wore on, either. Carlson has not gone as many as three games without a point since the last three games of November. Since December 1st, his 10-25-35 scoring line is second in the league among defensemen (Brent Burns: 9-33-42), and only Burns has more power play points (18 to 15 for Carlson). He is 1-6-7, minus-4, in 12 career games against the Sharks.

California is rarely kind to the Caps, and this year has offered no exception yet. San Jose has been an especially disagreeable host. The Caps have not won a game in regulation in San Jose since October 1993. How long ago was that? Keith Jones scored the game-winning goal. Dmitri Khristich had a two-point game. Rick Tabaracci was the goalie credited with the win. Arturs Irbe, who has since come and gone as a Capitals goaltending coach, took the loss.

The Caps have shown a certain resiliency with respect to taking back the top spot in the Metropolitan Division when they were passed. Pittsburgh now occupies that spot, one point ahead of Washington. The Caps could re-take the lead, if only for a short time (the Caps play on Saturday afternoon, the Penguins in Toronto later that evening), but more than placement, it would show evidence of life that so far on this trip has been hard to measure.