Does anybody want this trophy?

The Richard Trophy, that is...

The Peerless Prognosticator is ON THE AIR!!! -- Caps vs. Bruins, April 5th

The Caps are back home tonight to take on the Boston Bruins at Verizon Center. The Caps are your newly minted Presidents’ Trophy winner for the 2009-2010 season, the first time the club has achieved this honor. And in honor of the occasion, yours truly has assembled the greatest collection of Presidential timber since Thomas Jefferson dined alone…

We have John Adams – lawyer, author, revolutionary, delegate to the First and Second Continental Congresses, ambassador, Vice President, and second President of the United States. Oh, and HBO film star. Mr. President, you have some special perspective on this historical moment in Caps history, I’m sure. What drives a person to such heights of achievement?

“A desire to be observed, considered, esteemed, praised, beloved, and admired by his fellows is one of the earliest as well as the keenest dispositions discovered in the heart of man.”

I see… and my notes indicate that you are something of a hockey fan, particularly the physical aspect of the game. You, I take it, are not a fan of the instigator rule…

“Arms in the hands of citizens may be used at individual discretion... in private self-defense.”

Ulysses S. Grant, you served as both General-in-Chief of the Union Army during the American Civil War, and you served two terms as Commander in Chief. I’m also told that you are a particular fan of the Caps and Coach Bruce Boudreau. You seem especially taken by Boudreau’s philosophy. I suppose because it mirrors your own…

“In every battle there comes a time when both sides consider themselves beaten, then he who continues the attack wins.”

And the Presidents Trophy represents the culmination of a long season of effort with its ups and downs. I guess it makes for a special kind of camaraderie, would you say, President Grant?

“The friend in my adversity I shall always cherish most. I can better trust those who helped to relieve the gloom of my dark hours than those who are so ready to enjoy with me the sunshine of my prosperity.”

Andrew Jackson – “Old Hickory.” No lack of toughness in your background. I’ll bet you have a bit of advice for those who would make the leap from the Presidents Trophy to the Stanley Cup…

“You must pay the price if you wish to secure the blessing.”

Dwight D. Eisenhower… general, war hero, university president, and President of the United States. You, as much as any American President, have experienced the sting of battle, but you have a different perspective when it comes to just how hard it is to win consistently in a fashion that earns a team this honor.

“Farming looks mighty easy when your plow is a pencil and you're a thousand miles from the corn field.”

Tonight the Caps take the ice as the Presidents’ Trophy winner, the top team in the NHL for the regular season. Yes, there is another season looming, but for the moment this is a pleasant place in which the club has never found itself. At the other end of the spectrum there are the Boston Bruins, a team that sits precariously among the top-eight in the East, tied with the Flyers for seventh, two points ahead of the ninth-place Rangers, and three ahead of the 10th-place Thrashers.

The Bruins are a club that has had a difficult time getting any traction lately. They have not won more than two games in a row since the Olympic break (9-8-1). It is hard to believe that a team could compile such a weak record with a goals-against-per-game of 2.06 over those last 18 games. But an offense that manages only a 2.36 goals-for average over that time isn’t one that is going to take advantage of the defense and goaltending it is getting. Here is how bad it is. Since the Olympic break the Bruins have allowed more than two goals in a game seven times. They lost all of them (0-6-1). Of their nine wins three have come via shutout, all three coming in their last four wins. Here is how the overall numbers shake out… 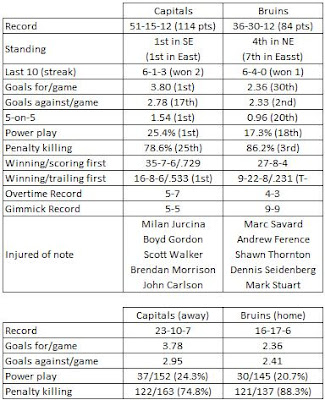 It puts a lot of pressure on Tuukka Rask, who appears to have wrested the number one goaltender job away from Tim Thomas. Not that being the Bruins’ top goalie is a breeze these days. Since the Olympic break, Rask has a 1.71 GAA and a .935 save percentage with two shutouts. For all that, he is 6-5-0 over that span of time. Rask will move up in weight class as far as an opponent’s offensive capabilities are concerned, and he has never faced the Caps.

In “best versus worst” offense, the comparisons are stark, and the table above doesn’t do it justice. Here are some comparisons…

The Bruins have had one player with a multi-goal game since the Olympic break (Miroslav Satan, against Toronto on Saturday). The Caps have had eight such performances since the break. So what is with the top Bruin goal scorers, anyway?...

Marco Sturm leads the club with 21 goals, but he has only three in 18 games since the Olympic break, none in his last dozen games. According to the Bruin media guide, Sturm once worked as a BMW car mechanic. Well, he had better tune up his scoring if the Bruins are going to hold on. In 25 career games against the Caps he is 7-8-15 (scoreless in two games this year).

Patrice Bergeron has had a pretty good run since the break (although with Boston, it's all relative). In 16 games since the break he has six goals (6-7-13). He has a goal in two games against the Caps this year and is 4-11-15 in 17 career games.

David Krejci is the closest thing the B's have had to an offensive force since the break. He is tied with Bergeron with six goals in the 18 games he has been in since the break (6-12-18). He has a goal in two games against the Caps this season; 2-2-4 in 10 career games.

Blake Wheeler came out of the break looking as if he might be a go-to guy for the Bruins down the stretch, getting four goals in five games from March 7th through March 15th. But being a go-to guy is a lot to ask of a 23-year old. Wheeler has gone dormant lately, going without a point in his last ten games. He doesn’t have a point against the Caps, either – this year or any other (0-0-0 in six career games).

It is not as if the Bruins aren’t firing on all cylinders, either.  Having lost their biggest offensive threat – Marc Savard – to injury means that they have few cylinders on which to fire.

Chara might be the hottest Bruin on offense (2-4-6 in his last seven games). But his role is going to be keeping the top line for the Caps in check, specifically applying himself like a 6’9” 260 pound fur stole about the shoulders of Alex Ovechkin. One would have to say that Chara’s results have been “uneven” – Ovechkin is 9-8-17 in 14 career games against the Bruins. Chara leads the club’s defensemen in ice time, but over the past four years there has been a cut in his ice time – from 27:57 in 2006-2007 to 25:13 this year. It is still a lot of ice time (12th in the league), but is he losing a step? That could spell trouble for the B’s in this game.

Quietly, perhaps, Semin has scored goals in goals in six of his last nine games (7-2-9). In 16 games since the break he is plus-6 and has been a “minus” player only twice. Consistency at both ends of the ice is something the Caps need going forward. It will be interesting to see whether he can continue this over the last four games of the season given that the Caps’ final place in the standings is secure.

2. Six. Boston has a reputation for being a fine defensive team, but this is the total goal differential between these teams over the entire season for goals allowed per game at 5-on-5. What’s more, it is the Caps who have allowed fewer goals (129 to 135). If the Caps can keep this a 5-on-5 game, they can compete defensively with the Bruins.

3. In case it isn’t clear… MAKE THE BRUINS PAY AT FIVE-ON-FIVE.  That becomes especially important given that teams can't score against the Bruins' PK, and the Caps really shown any consistent ability to stop anyone's power play.

In the end, we’re getting to the end, and it will be hard to maintain focus this week. That is an especially hard thing to fight through when the opponent is still trying to hang onto a playoff spot. If there was one night we would be picking the other guys to win, this would be it.

But you know better…