The King's the Thing 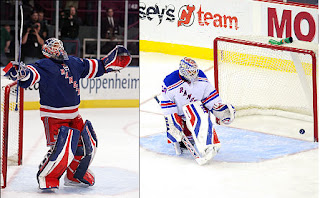 A lot of folks might agree at this point that the Capitals/Rangers first round playoff matchup is going to boil down to one player – Ranger goalie Henrik Lundqvist. In three starts against the Caps this season, King Henrik is 2-1-0, 1.34, .955, with two shutouts. He has stopped the last 67 shots he has faced off Capitals’ sticks this season. Last spring, the Caps were “Halak’ed” in the last three games of the first round playoff series against Montreal, as Jaroslav Halak put the Canadiens on his back and stopped almost everything the Caps threw at him to allow Montreal to win a series they trailed three games to one.  This year, the Caps could find themselves “King’ed” by Lundqvist. He certainly has the chops to pull off such an achievement, but his season numbers against the Caps aside, which Lundqvist shows up in this series is key.

“Which Lundqvist,” you ask? Well, consider that with the injury sustained by backup goaltender Martin Biron back in February, Lundqvist was forced by the Rangers’ uncertain playoff chances to play in the last 26 games of the season. His performance was nothing short of heroic, to the extent you can use that term in sports. In those 26 games, Lundqvist had what might be looked at as an unimpressive 15-10-1 mark, but he was 9-3-1 down the stretch. He also finished those 26 games with a 2.16 goals against average, a .924 save percentage, and four shutouts. You would have to say he met the challenge and begins the playoffs at the top of his game.

Or can you? Embedded in that 26-game run of excellence, there is the matter of his last five games. But let’s back up a bit. Before those last five games, Lundqvist had a run of four contests in which he surrendered a total of two goals on 113 shots and pitched two shutouts, going 3-0-1 in the process. It might have been the pinnacle of his season. But after that – in his last five games to finish the regular season – he has gone 3-2-0, 2.96, .899.

Has the pressure and physical toll that goes with 26 straight starts for a team fighting for its playoff life chipped enough away from his performance level to make him merely mortal as the playoff series against the Caps begins? You might get a clue early. Lundqvist has three wins in his last three tries in Game 1 of the first round of the playoffs (against Atlanta, New Jersey, and Washington).

Which Henrik will show up? On the answer to that question, the Caps’ season might turn.
Posted by The Peerless at 10:16 AM No comments: