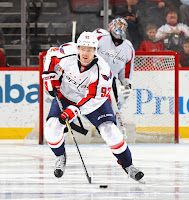 "You don't know a ladder has splinters until you slide down it."
-- Bum Phillips

Those were the first three seasons in the NHL for Evgeny Kuznetsov.  The progression suggested big things were in store for the 24-year old Russian who was firmly entrenched as the second line center for the Washington Capitals.  However, fate has a way of intervening, and the rungs on the ladder of success might give way from time to time.

It might have been a hangover from a disappointing 2016 postseason, or it might just have been a hiccup on the development path, but Kuznetsov had a slower than expected start to the 2016-2017 season.  He had a decent, if unremarkable, first ten-game split for the season, going 1-5-6, plus-4, in those ten games.  But rather than pulling himself up that ladder of performance, he found out it had those splinters, sliding down in his second ten games split (2-1-3, plus-1) and failing for the only time all season to record a goal in a ten-game split when he went without one in his third ten-game split (0-8-8, plus-1).

That absence of goals in his third ten-game split was part of what became a 17-game streak without a goal (Games 20-36).  He did have a six-game points streak in there (eight assists), but he was dragging an 0-for-38 shooting mark along.  Then, he flipped the switch.  Over a two-month span covering 27 games starting on January 3rd, Kuznetsov went 12-20-32, plus-15, tied for second over that period in points.  What made that performance so noteworthy was that Kuznetsov did it while logging the fewest minutes of ice time per game (16:22) of any of the top-25 scorers during that span of games.

But it didn’t last.  Over his last 19 games, Kuznetsov was a relatively quiet 4-4-8, minus-2.  The odd part of that finishing kick was how weak it was against weak teams.  In those last 19 games, he and the Caps played eight games against teams that did not reach the postseason, and Kuznetsov was just 1-1-2, minus-3, both his goal and assist coming in one game, a 5-3 win over the Colorado Avalanche on March 29th. 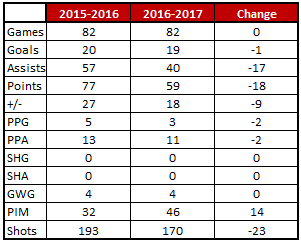 Fearless’ Take… At times, one forgets how young Kuznetsov is still.  Over the last three seasons he is one of four centers 24 years of age or younger to record at least 170 cumulative points (Mark Scheifele, Ryan Johansen, and Sean Monahan are the others).  He is one of 11 players drafted by the club in the history of the franchise to record at least 180 cumulative points in his first four seasons with the Caps.  He finished the season as the third-youngest skater on the club among those 18 skaters appearing in at least 40 games.

This was the contest that propelled Evgeny Kuznetsov to his mid-season run of individual success.  The game itself was a goal-fest, starting with a Justin Williams power play goal 74 seconds into the game, a play that started with a Kuznetsov feed to Dmitry Orlov, whose shot clicked off Williams and past goalie Frederik Andersen. The teams didn’t let up from there, exchanging goals at a brisk pace with Toronto taking a 3-2 lead to the first intermission.  The Leafs extended their lead to 4-2 going into the second intermission.  In the third period the Caps mounted a comeback, starting with a Kuznetsov goal 2:20 into the period, converting a feed from Marcus Johansson from the low slot into a one-timer past Andersen.  Dmitry Orlov got the Caps even just over a minute later, but Toronto grabbed back the lead mid-way through the period.

Washington tied the game one last time when John Carlson collected a loose puck in his end and fed Kuznetsov heading down the middle.  Getting behind the Toronto defense, Kuznetsov tried a backhand from in close, but he couldn’t get a good swipe at it with Tyler Bozak backchecking.  Andersen couldn’t locate the puck, though, and Kuznetsov chipped it back in front where Marcus Johansson and John Carlson got chances at it, Carlson potting the goal with less than seven minutes left.  In overtime, the Caps made short work of things.  Jay Beagle won the draw to open overtime, then went off for Alex Ovechkin.  Kuznetsov fed the puck from the right wing wall to John Carlson, who fed it across to Ovechkin for a one-timer that beat Andersen just 22 seconds into the extra frame. Kuznetsov finished the game with a goal and three assists, his four points being his season best, his third career game with four or more points.

Sometimes, things just seem that little bit out of sync in, well, everything.  Such was the case for Kuznetsov when the Caps visited the Ottawa Senators in late January.  For the Caps and Kuznetsov, it was the back half of a back-to-back set of games, the Caps having beaten Carolina, 6-1, the previous night.  They and Kuznetsov left their offense in Washington.  Ottawa got out to a 2-0 first period lead and never looked back in a 3-0 win.  For Kuznetsov it was an all-around “meh” game.  In 15:33 if ice time he had more minor penalties (two) than shots on goal (one), lost eight of 13 faceoffs, and was otherwise unheard from on the score sheet.  It was the only game in a nine-game span in which he failed to record a point.

Evgeny Kuznetsov had an odd postseason.  In one respect it mirrored his regular season.  It started slow (1-2-3, minus-1, in the first round series against Toronto), picked up markedly in the middle (4-3-7, even, in the first six games against Pittsburgh in the second round).  Then, it went silent at the end (two shots, no points in the deciding Game 7 against the Pens).  The odd part was that the shooting – at least shots on goal – didn’t seem to matter much.  The Caps were 3-3 in games in which Kuznetsov recorded four or more shots on goal, 4-3 when he was under four shots on goal.  Attention to detail seemed to track with results, at least as far as faceoffs were concerned.  Washington was 1-3 in games in which he was under 40 percent on draws. On balance, though, it was his best postseason in three tries.  He tied his career best in goals (five, set in 2015), and he more than doubled his points (ten, compared to nine over the 2015 and 2016 postseasons.  If not for that pesky Game 7 in the second round…

Evgeny Kuznetsov had pieces of a fine season.  He also had pieces of an indifferent one.  The start and finish to both his regular and postseason dragged down what might have been another fine season overall.  Kuznetsov is an indispensable element to the Caps’ success going forward, but the first order of business in fulfilling that role will be to extract the splinters from his hands from sliding down a rung or two on the career ladder and being more consistently productive than he was at times in 2016-2017.