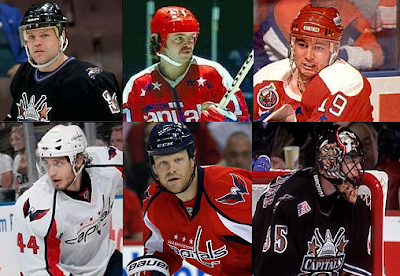 We have finished our look back and letters A-D on our refashioned “All-Alphabet Team,” which brings us to the letter “E.”

The “All-E Team” is an interesting one, if in an odd way.  When compiled in 2014 it was one that did not have a particularly deep resume, either individually or collectively.  Only John Erskine among the five skaters appeared in more than 300 games as a Capital (350), only Rolf Edberg posted more than 25 goals as a Cap (45), and Edberg was the only one to record more than 100 points (103).  Steve Eminger was the only one among the five to have been drafted by the Caps (12th overall in 2002); Eminger and Pat Elynuik eighth-overall by Winnipeg in 1986) were the only first-round draft picks.  As a group, the five skaters combined for fewer than 100 goals (99) and fewer than 300 points (289) in almost 1,100 games (1,096).

If we are looking at replacements for “All-E Team” since the original was published in 2014, we have few options.  Well, one.  The only skater since 2014 to take the ice for the Caps whose last name starts with the letter “E” is current center Lars Eller.  It hardly seems surprising that so few options for replacement exist, since there are only six skaters (including Eller) to have dressed for the Caps in the history of the franchise:

That Eller would replace Edberg at center on the “All-E Team” is a no-brainer.  That would be true solely on the basis of Eller’s 2018 postseason.  You will recall that in 24 games, he was 7-11-18, plus-6.  He had a league-leading three game-winning goals, including the double overtime game-winner against Columbus in Game 3 of the opening round to save the Cap’s season, and then the game-winning, series-clinching, Cup-clinching goal against the Vegas Golden Knights in Game 5 of the 2018 Stanley Cup final.

In goal, we do have to make a change that reflects an error we made when making the original selections in 2014.  At the time, we noted that Sebastien Charpentier, the man with the asterisk, was selected by virtue of his having more “E’s” in his name than any other goalie.  Well, that is not true.  That distinction belongs to Pete Peeters, who wins the “E” count, five to four.  And Peeters makes a better case on the merits.  He is tied with Jim Carey for seventh place in games played by a Capitals goaltender (139), is tied with Carey for fifth place in wins (70) in team history, is 11th in team history in goals against average (3.06; minimum: 50 games), and is 12th in save percentage (.886, perhaps more a product of the period in which he played, one that featured more offense generally).  He is tied with Michal Neuvirth for sixth place in shutouts in team history (seven), and only three goalies in Caps history have posted more points than Peeters (six).

All-E Team might not be among the more renowned of the All-Alphabet Teams, but they have had their moments.
Posted by The Peerless at 2:45 PM No comments: