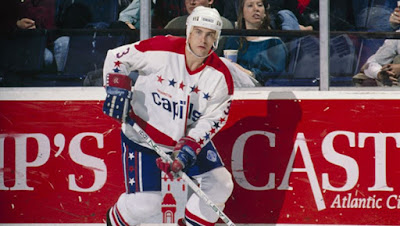 There are distinct mileposts in a team’s history. For teams that have won championships, the dates when they clinched a title are foremost among them. For teams that haven’t, others have to do. In the case of the Washington Capitals, the dates that stand out in team history more often than not are those when important deals were transacted. And in almost all of those cases for the Caps, they involved a player arriving in Washington. There was September 9, 1982, when the Caps obtained Rod Langway in a trade that might be the most consequential deal in the history of the club, quite literally saving hockey in Washington. There was July 11, 2001, when the Capitals traded for arguably the best player in the league at the time in Jaromir Jagr. There was June 26, 2004, when General Manager George McPhee stood at the podium at RBC Center in Raleigh, North Carolina, and announced that with the first pick in the 2004 entry draft, the Caps selected Alex Ovechkin.

But there is a date in Capitals history important for the player who left town. That date was July 16, 1990. The St. Louis Blues had tendered an offer of a four-year, $5.1 million contract to Capitals restricted free agent defenseman Scott Stevens. Weighing the choice of matching the offer or accepting as many as five first round draft picks in return, the Capitals opted for the latter, allowing Stevens to depart. He signed his contract with the Blues on July 16, 1990.

This deal occupies its own special place in Caps history. In fact, it could be its own “wing” of the museum, if you will. The departure would make Stevens arguably the most prolific and consequential draft pick in team history for the lineage his departure sprouted: 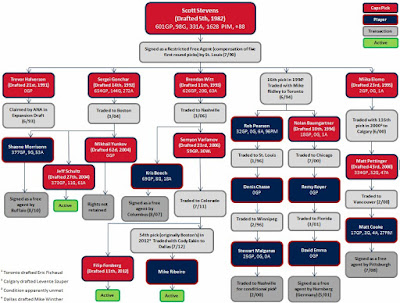 Things have progressed even more since this superb tree was developed at Japers' Rink (for example, Nathan Walker, who could land a spot on the Opening Night roster, is a part of this tree, and boy, it that a road to behold/1).

But the subject of our thought exercise is not the Stevens departure, but what would have happened had the Caps matched the Blues' offer and retained him for another four years. The immediate effects would have been felt on the ice. The question is, would they have been significant? In the 1990-1991 season the Caps had a revolving door at the blue line, owing to injuries and trades, dressing a total of 14 defensemen in the regular season, but only four of them appearing in more than 60 games – Calle Johansson, Kevin Hatcher, Mike Lalor, and Mikhail Tatarinov (parenthetically, current Chicago head coach Joel Quenneville was one of the 14, dressing for nine games with the Caps). One would think that Stevens, who dressed for 73 or more games in seven of his first eight seasons with the Caps, would have been another reliable fixture in the lineup. One would also think that Stevens, who topped 50 points in five of those eight seasons, would have given the Caps three such performers on the blue line (Johansson had 52 points, and Hatcher had 74).

But it might have been in the postseason in which Stevens’ presence could be most keenly felt. The Caps had six defensemen appear in at least ten of the team’s 11 postseason games in 1991. Hatcher, Johansson, Al Iafrate, and Calle Johansson were solid performers. Rod Langway, even at the tail end of his career, was still a solid stay at home defenseman. The other two defensemen – Mike Lalor (who came to the Caps in the Geoff Courtnall trade of which we spoke in the previous installment in this series) and Ken Sabourin were the others. It is Sabourin who deserves some attention here. Mid-way through the regular season, the Caps were lollygagging along with a 22-25-2 record when they made a trade to get nastier. It was a two-stage effort, the first picking up John Kordic and Paul Fenton from Toronto for future considerations. Then, the Caps shipped Fenton to Calgary for Sabourin. The shake-up was an effort to address the problem that, in General Manager David Poile’s words, the Caps “have not played tough enough.”

Sabourin played in 28 regular season games, and then got a sweater for 11 games in the postseason (he did not record a point in those 11 games and was minus-4). One wonders, if Stevens was still with the club, do the Caps make that deal? Stevens was the more skilled defenseman by leaps and bounds (which is no insult to Sabourin, a solid player in his own right) and did not lack for orneriness. That combination of attributes might have been the missing ingredient in the Caps’ five-game loss to Pittsburgh in the second round.

But thinking over the four years that Stevens might have spent in Washington had the team matched the Blue’s contract offer, it is interesting to compare Stevens’ durability and production with the changes that characterized the blue line over that period. A total of 26 defensemen dressed for the Caps over that period, Hatcher and Johansson the only ones to spend all four full seasons with the Caps (Al Iafrate spent two full seasons and parts of two other seasons with the club, the last part of 1990-1991 after arriving in Washington from Boston and leaving late in the 1993-1994 season for Toronto). Only Hatcher had more points in those four seasons than Stevens would record with St. Louis and New Jersey in real time (247 to 243), Stevens ranking tenth in points among 353 defensemen who dressed over those seasons.

This is not to say that the Caps would have been a Stanley Cup contender over those seasons, let alone a Stanley Cup champion. But it is hard to see how the team was made better in the short term of that four year contract, especially when one considers that the first of the five first round draft picks the Caps got in compensation did not dress for the Caps until the 1994-1995 season (Sergei Gonchar, drafted in 1992).

About those draft picks, though. On their own, the quartet of Gonchar, Trevor Halverson (1991), Brendan Witt (1993), and Mikka Elomo (1995; the Caps traded their 1994 pick with Mike Ridley to Toronto for Rob Pearson and a first round draft pick that became Nolan Baumgartner) had an uneven history with the club, neither Halverson nor Elomo (a total of 19 games between them with the Caps) getting much ink in the history book, while Gonchar (second highest goal scorer among defensemen in team history) and Witt (the second most penalized defenseman in team history) had solid careers with the club. Both Gonchar and Witt played for what would be the only Capitals team to play in a Stanley Cup final, in 1998, but they were feature players in a club that was largely an annual spring disappointment.

Even looking at the Stevens “family tree,” there are a lot of familiar names in addition to those we already mentioned – Matt Pettinger, Semyon Varlamov, Jeff Schultz, Kris Beech (in what would be his second tour with the club), and Mike Ribeiro among them. But they are well-known characters in those annual episodes of disappointment, too. Volume and quality are, in the context of the family tree, not synonymous.

In the end, there is no logical argument that springs to mind in favor of letting Scott Stevens go being a good move in a hockey sense. And despite the prolific nature of the deal, resulting in more than a dozen players dressing for the Caps over a period spanning more than two decades, there is the disappointment that has grown alongside the Stevens Family Tree over those same years. It is a truly bitter “what if” to contemplate.

1/  Follow along… After the Caps traded Filip Forsberg, who is fruit of this tree, for Martin Erat and Michael Latta, the Caps later traded Erat and John Mitchell to Phoenix for Chris Brown, Rostislav Klesla, and a fourth round draft pick. Klesla was immediately traded with Michal Neuvirth to Buffalo for Jaroslav Halak and a third round draft pick. Halak was later traded to the New York Islanders for a fourth round pick in the 2014 draft. The Caps traded that pick (which belonged originally to Chicago) and their own fourth round pick to the New York Rangers for a third round pick in the same draft that was used to select Nathan Walker. The tree lives on.
Posted by The Peerless at 12:00 AM 1 comment: