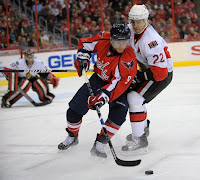 Theme: “Promises are like the full moon, if they are not kept at once they diminish day by day”

It might be a German proverb, but it seems to capture the season Brendan Morrison had on the ice for the Caps. Morrison was signed as a free agent in July 2010 from what might be called the “ding and dent” aisle. The former Hobey Baker Award winner had wrist and knee injuries that limited him to 39 games with Vancouver in 2007-2008. The following year might have been a recuperation year for Morrison, for even though he played in 81 games between Anaheim and Dallas, he mustered only 15 goals and 31 points, which was not much of an improvement over his 39-game totals of the previous year (9 goals, 25 points). It was his lowest goal total for a full season since 2000-2001 and his lowest point for a full season for his career.

Signing Morrison, especially given the potential for rekindling some magic with former Michigan Wolverine teammate Mike Knuble (already signed to a deal as a free agent), looked like a potential bargain. It started that way, too, but as you look at his ten-game segments, you will also see that like the full moon, the promise of his being a bargain diminished, if not day by day, then ten-game segment by ten-game segment… 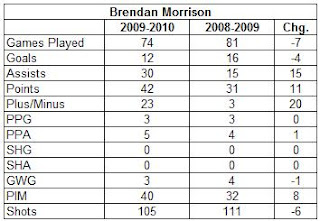 Morrison started out 9-14-23 in his first three ten-game segments, putting him on a pace for a 25-38-63 season. If the Caps realized that level of production, it would have been the highest point total for a Capitals’ second-line center since Joe Juneau put up 64 points in the 1995-1996 season. But something happened starting with the 30th game. While Semyon Varlamov was shutting out the Tampa Bay Lightning, 3-0, in St. Pete Forum, Morrison was going without a point and losing nine of 12 draws in 15 minutes and change of ice time. It would be the first game of a considerable drought for Morrison, who would go 1-5-6 over his next 22 games.

It would not get much better after that. Starting with that 30th game of the season, Morrison would go 3-16-19 over his last 45 games (he missed eight games to injury and scratches), a 5-35-40 scoring pace. While his season totals represented an improvement over his 2009-2010 season in some respects (total scoring, plus/minus, faceoffs), but the season that started so well ended rather poorly.

It did not improve during the playoffs. He was not given a sweater for Games 1 or 6, and he was ineffective otherwise, registering one assist in the five games he played in an average of 12 minutes of ice time.

What makes Morrison’s numbers even less satisfying is that he was 5-14-19 in 23 games against Southeast Division competition, not exactly the most fearsome the NHL had to offer. He was 7-16-23 in 51 games outside the Southeast, not the sort of numbers that you would expect – or, in fact, need – to have from the second line center.

If you are looking for a statistical comparable, at least in the usual sorts of general numbers you see in the tables, Morrison’s line (12-30-42,105 shots, 15:44 average TOI) resembles that of Steve Reinprecht of the Panthers (16-22-38, 124 shots, 16:05 average TOI), and you could probably explain away the differences in their plus-minus (+23 vs. -1) as being a product of the Caps being the Caps and Panthers being, well… the Panthers. Morrison might have been the better economic bargain ($1.5 million cap hit vs. $2.05 million for Reinprecht), but all in all, we think of Morrison’s year as being something of a disappointment…

On the bright side, though, Morrison did provide one of the highlights of the season for the Caps…

It was the game winning goal in the last game before Christmas. Alas, Morrison would score only two more goals over the rest of the season, and only three times would he record points in consecutive games (twice getting points in three straight).  The hunt for a productive second line center continues.