John Erskine
Theme: "If the power to do hard work is not a skill, it's the best possible substitute for it."

The quote from James A. Garfield seems especially appropriate for John Erskine. Last season, Erskine played the most games of any season in his NHL career (52), and while he is not likely to build a career as an elite NHL defenseman, he has put together a respectable career, filling a role as a physical defenseman on a team that could use more of that attribute.

But with physical play comes the unfortunate result of injury, and it is something Erskine has had to deal with in each of his three seasons with the Caps:

These aren’t physical breakdowns as much as they are the effects of collision. But will they accumulate? Erskine might be asked to take on an additional role this year. If not the Caps’ “enforcer,” the departure of Donald Brashear might pull Erskine into a larger role as a player to keep the peace, or at least keep opponents honest. In 132 games with the Capitals, Erskine has been in 12 fights, so he is no stranger to that aspect of the game. But while he had five in 29 games in the 2006-2007 season, he had four in 51 games in 2007-2008 and three in 2008-2009. That might be explained by his taking on a larger role in terms of his on-ice responsibilities, it also might be explained by his having sustained a concussion last year. Erskine should not be expected next year to assume the mantle worn by Brashear – policing the ice is likely to be done by committee, Erskine being a member of that group.

On defense, Erskine appears to be one of those players who can thrive in certain situations, but struggle in others. He was a minus-5 in five games against the Carolina Hurricanes (three of which the Caps won, games in which Erskine was minus-3), a team with considerable team speed. On the other hand, against the four teams in the East that finished above Carolina (Boston, New Jersey, Philadelphia, and Pittsburgh, none of which are as quick as Carolina), Erskine finished plus-4 in 13 games and was not a minus player in any of them.

Although using a plus-minus statistic on its own as an indicator carries with it its own problems, it does at least suggest managing how Erskine is deployed. With players coming up from below (Karl Alzner, John Carlson) who might see some time, and the return of Brian Pothier, the prospect of Erskine playing in 50-55 games seems less to be a product of health this coming season as it is spreading time around among defensemen.

Fearless: There is an underestimated efficiency to Erskine’s game. He might be looked at by some as something of a bruiser lacking the skill of a Mike Green or even a Tom Poti or Brian Pothier, but Erskine had the best goals-against-per-60-minutes of any Caps defenseman (5-on-5, 30 games minimum) last year. A lot of that is not facing a team’s top scoring lines (he faced the lowest quality of completion among those Caps defensemen playing at least 30 games, according to behindthenet.ca), but the job presented to Erskine is one he performed reasonably well. He’ll probably be managed with respect to the teams against which he skates and the situations into which he is placed, but he’s probably going to have more success in those situations than Caps fans might give him credit for. Erskine is one of four NHL roster defensemen under contract at least through 2010-2011 (Mike Green, Tom Poti, and Karl Alzner being the others). One would expect that he’s going to man a 5/6/7 defenseman position for the next couple of years.

Cheerless: There’s nothing special about Erskine. OK, cuz, before you smack me, wait a second. What I mean by that is that of the seven Caps defensemen playing at least 30 games last year, only Milan Jurcina had less ice time on special teams (1:02/game) than did Erskine (1:39). And, his shorthanded time has dropped from 2:57/game in 2006-2007 to 2:16 in 2007-2008 to 1:39 last year. You could say that is a product of other defensemen growing up around him (most notably Mike Green, whose shorthanded ice time climbed from 20 seconds a game in 2007-2008 to 2:28 last year). Erskine might not get more than a minute’s worth of penalty killing time a game this year, and I might get more time on the point on the power play.

We’re not going to see Cheerless on the power play, mainly because you generally want to keep two hands on the stick, and one of his is always occupied by a can of beer. As for Erskine, he would not appear likely to improve on his career best 52 games played last year, even if healthy, absent a trade of or injury to one of the other defensemen. Alzner could going to eat into some of his time, and Pothier is starting the year healthy. There will be other defensemen out there for the skills portion of the show – power play and penalty killing, but Erskine has carved out a role based on hard work and competing in those situations he’s called upon to play. 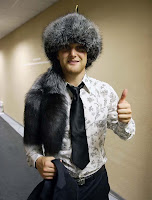