Let’s get back to our scribbles with a fun fact.  We noted on social media on Wednesday night that major league baseball's Washington Nationals scored double digits in runs for the fifth time in seven games and totaled 74 runs in that span.  By way of comparison, last year the Caps needed 22 games to amass 74 goals.  But then, someone asked what was the Caps' record for goals over a seven-game span.

Turns out, that record is 44 goals in seven games, set in Games 55-61 in the 1992-1993 season.  The seven-game stretch featured some odd history, not the least of which is the only instance in team history of recording ten or more goals in consecutive games and both of them on the road.  Here is how the team fared, game-by game:

And here is how the individual players performed over that span of seven games: 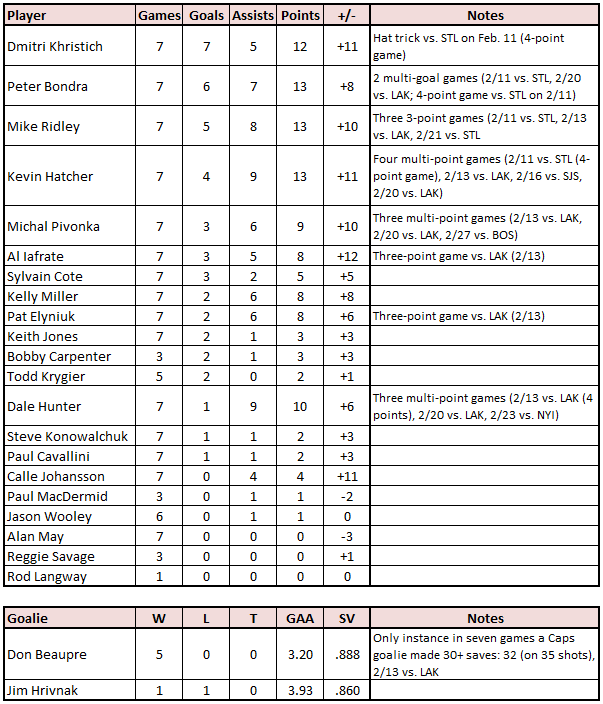 It is worth noting that while the Caps performed about as well on the power play over these seven games (21.4 percent) as they did over the course of the entire season (21.8 percent, fourth in the league), the penalty kill far under-performed in this seven-game stretch (74.4 percent) compared to their full season performance (82.9 percent, seventh in the league).

At an individual level, we took note of the following:

Thanks to @Brian88847374 for asking the question and sparking this piece.
Posted by The Peerless at 2:57 PM No comments: