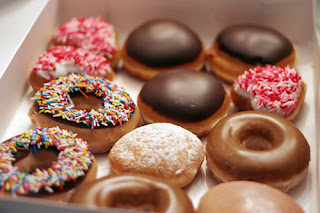 This is a team that needs more red meat on its menu, because at the moment they look a little too fat and happy…the product of too many doughnuts.
Posted by The Peerless at 11:22 PM 8 comments: 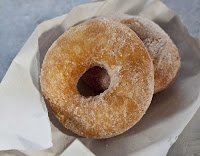 In the end, the Caps are now in sixth place in the East (Montreal overtook them for fifth place with a 3-0 win over Toronto)...note: OK, they're still in fifth by virtue of fewer games played, but still. And now, they go on a five-game road trip, three of the games to be played on the west coast. At the moment, the Caps cannot be thought of as a Stanley Cup contender. They’re just not. The offense is derelict, the power play incompetent, and the focus absent. The defense had an off game that caught up with them when the Kings finally managed to tie the game in the second period. After that it just got worse. The Caps’ lone score came on a play that the Eastern Conference teams have figured out and taken away – the Ovechkin cut-to-the-middle wrist shot. All in all, it was a brutal effort that was one of too many this season on the part of the Caps. Enough so that any thoughts of a deep Stanley Cup run are becoming more hope than expectation.
Posted by The Peerless at 9:55 PM 2 comments:

The Peerless Prognosticator is ON THE AIR!!! -- Caps vs. Kings, February 12th

The Peerless Prognosticator is ON THE AIR!!!
We are back at Peerless Central, bringing you the best prognostications in the prognosticatorial galaxy, and today it’s…
…what’s with the mirror?
"You been gone, cuz, and we needed a substitute."
Uh-huh…I’m listening.

"Well, we got this one cheap…one owner.  A queen, too!"
This isn’t going to end well, is it?
"And it even talks!  Listen…’mirror, mirror, on the wall, who is the greatest hockey team of all?'”
“The 1977 Canadiens.”
Shouldn’t you be using this for the Caps?
"Uh, we got some bugs to work out…"
And so do the Caps, who come into this afternoon’s game against the Los Angeles Kings right where we left them when we went on a break…fifth in the Eastern Conference.  At the moment our Cappies are the very definition of “treading water”… 2-2-2 in their last six contests and letting the four teams above them in the standings open up some space ahead of them.  Not that we care, since the playoffs are the only thing that matters.  Except HOW they get to the playoffs does matter, and we took a peek at that in our last scribble.
Today’s opponent – the Los Angeles Kings – serves to hold something of a mirror up to the Caps, at least in terms of the overall numbers, which look a lot like the Caps… 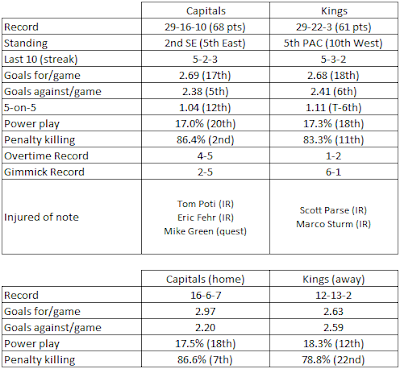