The Peerless Prognosticator is ON THE AIR!!! -- Game 82: Rangers at Capitals, April 11th

The curtain comes down on the 2014-2015 regular season on Saturday afternoon at Verizon Center, but not before the Washington Capitals host the New York Rangers in the fourth and final meeting of the clubs this season.

The Rangers lead the season series, having won the first two games this season, but the Caps scored four unanswered goals in the second and third periods to defeat the Rangers, 5-2, at Madison Square Garden in their most recent meeting.

It could be said that both clubs are happy with their momentum heading into the post season.  Washington is 9-2-1 in their last 12 games, scoring 35 goals in those games and limiting opponents to 27.  Meanwhile, the Rangers have built and sustained a remarkable record since they were just 11-10-4 after a 3-2 loss in Detroit on December 6th.  Since then, New York is 41-12-3, a 124-point pace over 82 games.

More recently, the Rangers had a five-game winning streak stopped on Thursday night, 3-0, by the Ottawa Senators.  The loss might be forgiven for a number of reasons – the Rangers were coming down off their Presidents Trophy-clinching win against New Jersey on Tuesday; and they sat out Rick Nash, Mats Zuccarello, and Marc Staal.  Defenseman Kevin Klein missed another game from a broken arm suffered against the Caps on March 11th.

As it is, the Rangers still outscored their opponents by a 20-13 margin in their last six games (5-1-0) since dropping that 5-2 decision to the Caps on March 29th.  Their special teams have been uneven over those games, the power play just 3-for-22 (13.6 percent) and only 1-for-18 (5.6 percent) since they scored a power play goal in the first period in a 3-2 win over Minnesota on April 2nd.

Over their 5-1-0 run the Rangers have enjoyed balance in their scoring.  Fourteen different players have goals, and 17 different players have points in the six games.  The goal scoring involves the expected and the unexpected.  Derek Stepan has 16 goals on the season, tied for sixth on the club.  Three of them came over the past six games, including the overtime game-winner in a 4-3 win over Columbus last Monday. Stepan has been on something of a tear of late, going 5-7-12, plus-8, over his last 11 games.  He is 5-3-8, minus-1, in 18 career games against the Capitals.

The other three-goal scorer over the Rangers’ 5-1-0 run is Dominic Moore.  Even with the three goals over his last six games, Moore has not cracked double-digits in goals; he has nine in 81 games this season.  The burst ended a long drought in which he recorded a single goal over a 24-game span. Moore, in his tenth season and his ninth different team (he was drafted by the Rangers in 2000 before starting his league tour), has been more of a checking forward with the occasional spasms of goal scoring (13 in 81 games with Toronto and Buffalo in 2008-2009 and 18 ub 77 games with Tampa Bay in 2010-2011).  The nine goals he has in 81 games this season is almost as many as he recorded (10) in 152 games over the previous two seasons with Tampa Bay, San Jose, and the Rangers.  Moore is 3-7-10, minus-4, in 31 career games against Washington.

Ryan McDonagh led the defense in scoring over the last half dozen games (1-5-6).  The Captain is not having quite the season he had offensively last season; he is 8-24-32 in 70 games versus 14-29-43 in 77 games last season.  However, his defensive numbers are puzzling.  His season Corsi-for percentage at 5-on-5 is 48.1, not especially indicative of being a top-end possession player.  His Corsi-for/relative of -1.62 is another such indicator.  However, he does have some hard minutes to play with an offensive zone start percentage of 45.1 (numbers from war-on-ice.com and behindthenet.ca).  The trouble is not his alone, though.  The Rangers are not a particularly effective possession team, more or less living off their PDO number (sum of shooting and save percentages). 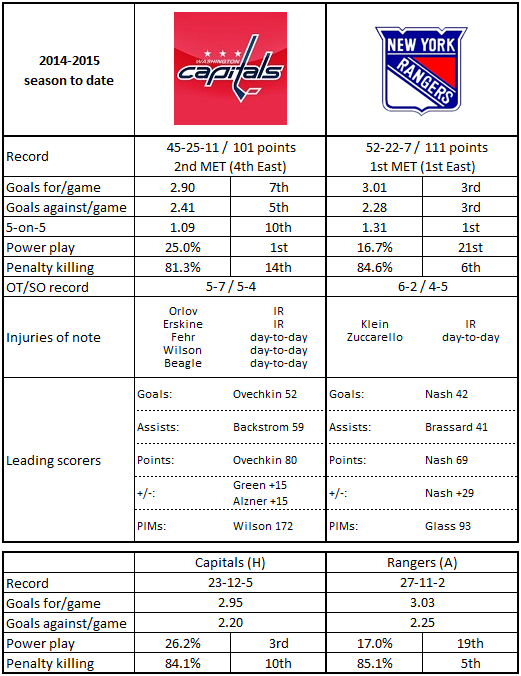 1.  Winning the Presidents Trophy is not a good indicator of post-season success.  The trophy has been awarded 28 times before this season.  Only eight times has the winner gone on to win the Stanley Cup, and only once was it done by an Eastern Conference team – the Rangers in 1994.

4.  Odd Rick Nash fact… No player in the league this season other than Nash has a combination of at least six power play goals and at least four shorthanded goals.

5.  The Rangers’ team plus-minus on the road is best in the league (plus-30) and is almost twice as good as their closest pursuer (Anaheim: plus-16).

3.  In their last dozen games the Caps have had 18 skaters and one goalie (Braden Holtby) record points.  The leader among them in that span is Matt Niskanen (1-9-10).  His goal came in the Caps’ last game, a 3-0 shutout of Boston and was Niskanen’s first goal scored in April of the regular season since April 3, 2008, when he scored a goal in a 4-2 win over the Phoenix Coyotes.  The streak was stopped at 37 games.

4. Alex Ovechkin leads the league in goals; he leads the Caps in goals over their 9-2-1 run (seven).  What he does not have is a goal in any of his last three games.  It is his third three-game streak without a goal in his last 13 games overall.  He also has three multi-goal games in that span.

5.  Washington’s possession numbers over their 9-2-1 run are solid.  At 5-on-5 overall the Caps have Corsi-for and Fenwick-for percentages of 52.4 and 52.6, respectively.  In close score situations those numbers are 52.4 and 52.0, respectively (numbers from war-on-ice.com).

The New York Rangers got perhaps more than anyone could have dreamed from Cam Talbot in goal when Henrik Lundqvist went down with a neck injury suffered against Carolina on January 31st.  However, it is Lundqvist who had the 92 games of playoff experience, it is Lundqvist who has a Stanley Cup final appearance on his resume.  And, it is likely that if the Rangers are to be successful in the 2015 post season, it will be up to Lundqvist to perform at that level once more.  Lundqvist returned to the lineup on March 28th, and in six appearances since his return he is 4-2-0, 2.32, .925, and he has allowed more than two goals only once in his last five games.  It appears he is back.  This game has meaning for Lundqvist, should he get the call.  In eight full NHL seasons (not including the abbreviated 2012-2013 season) Lundqvist has never won fewer than 30 games.  He has 29 wins this season.  Lundqvist is 17-8-3, 2.53, .909, with four shutouts in 28 career games against the Capitals.

The end-game of the regular season is shaking out in an odd way for the Caps.  Evgeny Kuznetsov, who is not going to be the Calder Trophy winner many thought he could be this season as the league’s top rookie, is setting himself up to be perhaps the Caps’ “wild card” performer for the post season.  Kuznetsov is 5-8-13, plus-6, in his last 16 games for Washington and has held his own centering Alex Ovechkin in recent games.  Whether that combination survives into the post season, or if Ovechkin is once more paired with Nicklas Backstrom, Kuznetsov is performing at a level more in line with what fans might have hoped for when the season started.  He has proven to be an efficient scorer, too.  Despite his 13:16 of ice time per game, 72nd among league rookies, he is tied for 15th in goals (11), and he is ninth in total points (37).  Only Johnny Gaudreau (21) and Filip Forsberg (19) have more power play points than Kuznetsov (13).  He is 1-1-2, even, in three career games against the Rangers.

When the teams take the ice on Saturday afternoon, 184 days will have passed since the Capitals opened their season in Montreal, and the Rangers opened their season in St. Louis.  It is hard to know what to make of the Rangers.  They have the league’s best record, but it has not been a product of sterling possession numbers.  That PDO number stands out and makes one wonder if there is a “correction” of sorts in the Rangers’ future, or if they are just that good, regardless of what the fancystats say.

On the other hand there are the Caps, the earnest tortoise to the Rangers’ hare, slowly and methodically reaching the 100 point mark for the eighth time in franchise history with a chance to become the fifth ranked club in standings points in franchise history (yes, in part fueled by the three-point game of this era of hockey).  The Caps have only one winning streak as long as four games this season, but they have another eight three-game winning streaks and could have a ninth with a win on Saturday.  Only once in eight ten-game segments this season have the Caps failed to earn at least ten points.  It is a mark of their consistency this season.

There might be points of pride for both clubs to make in Saturday’s game, and they should not be dismissed.  And, the Caps might still have the matter of seeding in the first round, whether they have home ice advantage or not.  However, each team has much larger stakes to worry about starting next week.

Posted by The Peerless at 3:30 PM No comments: