Today's Caps are the best offensive team in the NHL, averaging 3.60 goals per game at the 30-game mark. But that 1991-1992 team? Through 30 games they potted a whopping 137 goals (4.57/game). 15 times in those 30 games they scored at least five goals, compared to six times (discounting Gimmicks) for today's version of the Caps.

If you ever needed a quick lesson in just how much the game has changed in the past couple of decades, even with today's rules that "open up" the offense, there it is in rather stark terms.
Posted by The Peerless at 12:23 PM 3 comments: 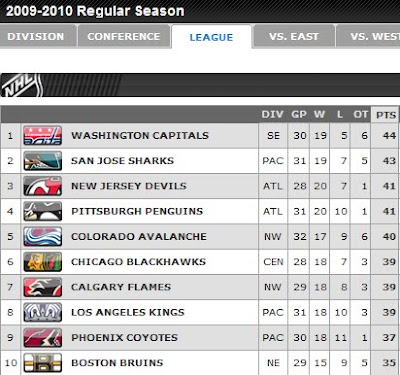 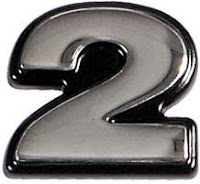 Another day, another win.

And one shouldn’t get too picky about the particulars when you’re winning either, but that’s kinda what we do here, so we will…

The game itself really did break down into three distinct periods – a counterpunching first period, an aggressive second period, and a more disciplined third period than what the Caps showed the last time goalie Semyon Varlamov had an opportunity to pitch a shutout.

“The Big Story,” as it were, will be Alex Ovechkin this morning and his return to the lineup after spending a fun-filled two-game vacation from the rink, courtesy of the fine folks in the NHL front office. This being a game played in south Florida, the phrase that comes to mind thinking of Ovechkin’s return is one applied to a former American presidential candidate – he was “tanned, rested, and ready.”

Was he ever. Ovechkin wins the “Silver Stuckey” for sampling the entire score sheet buffet… seven shots on goal, two goals, a shot blocked, a blocked shot, two misses, two giveaways, a takeaways, five hits, and he won the only faceoff he took. All in a nice and tidy 22 minutes of ice time.

In other words, a pretty average night. But Ovechkin certainly wasn’t the only Cap to sample the goodies in this one…

- Eric Fehr is quietly putting together quite a season. The goal he scored as a product of a display of superior hand-eye coordination, swatting a bouncing puck past Lightning goalie Mike Smith, was his eighth in 20 games. He is on a seven game points streak, and after going scoreless in his first four games has points in 12 of his last 16 and is on an 82-game pace of 41-36-77, plus-51 (that is not a misprint) in those last 16 games.

- Tomas Fleischmann had a slump in late November, going four consecutive games without a point. Take that away, and Fleischmann has points in 13 of 15 games. He added a pair of assists to his point total last night. For the season he is on an 82-game scoring pace of 43-30-77.

- Alexander Semin had a pair of assists last night for his third multi-point game in a row and fourth in his last six. For the season he is on an 82-game scoring pace of 43-55-98.

- It might get lost in all of those pucks rocketing into opposing nets, but the Caps have done quite a job keeping pucks out of their own net. With last night’s shutout, that is nine of ten games in which the Caps have allowed three or fewer goals, seven of ten in which they have allowed two or fewer. But hey, they can’t play defense, and they have iffy goaltending, right?... right??

- And make that 13 of 15 games in which the Caps have allowed fewer than five power plays for the opposition. They’ve killed off the last 15 shorthanded situations they’ve faced, going back to a power play goal by Joe Corvo early in a 3-2 win over Carolina on November 30th.

- Odd, perhaps, that Mike Green did not register a shot on goal last night, seeing as how the Caps did manage 34 on Smith.

- All of a sudden, Martin St. Louis looks old, and Vincent Lecavalier looks disinterested. Hard to fathom that neither player registered 20 minutes of ice time last night, until you look and see that Lecavalier had only five shifts in the third period (none in the last seven minutes), and St. Louis had only four shifts (none in the last six minutes). Zenon Konopka had six shifts. Think Coach Rick Tocchet was sending a none-too-subtle message?

- If Semyon Varlamov doesn’t start getting more Calder buzz now, we have to wonder what’s going on. In his last nine games he has as many shutouts as he has occasions when he gave up more than two goals (two), and he is 7-0-2, 1.54, .945. What more could one ask for?

It was a solid night all around, exactly the sort of road game you would draw up. Keep the home team from getting off fast and getting the crowd, such as it was (12,400 official) into it, take advantage of opportunities, and slam the door when you have a lead. Wrap it up, put it on the plane, and take the same thing to Buffalo on Wednesday.
Posted by The Peerless at 6:47 AM No comments: