The Peerless Prognosticator is ON THE AIR!!! -- Game 79: Capitals at Blues, April 8th

Elimination Day.  It will be like this for the rest of this week, until the Washington Capitals are finally eliminated, or in the event of a miracle make the post-season.  For Tuesday, the fact is that if the Caps lose in regulation time to the St. Louis Blues, the Columbus Blue Jackets defeat the Phoenix Coyotes at home, and the Detroit Red Wings earn at least a standings point at Buffalo against the Sabres, the Caps will be officially eliminated from the post-season.

The Caps are trying to stave off elimination in one of the harshest rinks for visitors in all the NHL, Scottrade Center in St. Louis, Missouri.  For the Blues, it is home-sweet home, a venue in which they have posted 28 wins this season, tied for second most home wins in the league.  For the Capitals, it very well could be…

“The Red Mile…  They usually call death row the Last Mile, and we called ours the Green Mile, because the floor was the color of faded limes. We had the electric chair then. Old Sparky, we called it. You might call this ‘The Red Mile,” because the last week is going to seem to take on the color of the blood on a white road jersey, the price you often pay as a hockey player to earn a win and the badge you wear when your time comes to be eliminated.”

Very poetic.  And you are… 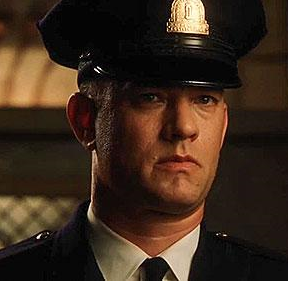 And you know about elimination games?

“In a manner of speaking.”

The Caps will be facing a team that in some respects resemble themselves.  In 2005-2006, the first year after the 2004-2005 lockout, the Blues were a struggling team, one that finished 21-46-15, good for fifth in the Central Division and dead last in the league’s standings.  They slowly rebuilt themselves, as did the Capitals, who finished 27th in that 2005-2006 season, until they were competitive, then a contender.  They have, however, been somewhat disappointing in their post seasons, though (not unlike the Caps), failing to advance past the second round in either of the past two post-seasons.  However, unlike the Capitals, who seem to have had time pass them by for the present, the Blues are now poised to challenge for a Stanley Cup this season.

For the last six weeks the Blues have been a juggernaut.  Before they lost consecutive games on Saturday and Sunday to Colorado and Chicago, St. Louis went 13-3-1 from March 1 through April 3rd.  Even though they do have those consecutive losses making them 13-5-1 since March 1st, they are poised to set a franchise record for standings points in a season.  With 111 points they are three short of their all-time high, 114 points in 1999-2000.  Their 52 wins is a record for the club.

In that 13-5-1 run the Blues have been the champions of the one-goal decision, going 6-0-1 in one-goal decisions over that span.  It suits their profile as a club that has played games close to the vest in that time.  Since March 1st the Blues are averaging just 2.47 goals per game.    However, unlike the Capitals, who have an uncommon lack of success in low scoring games, the Blues were 6-5-1 in games in which they scored fewer than three goals since March 1st.

They succeed by being very stingy in their own end.  Over their last 19 games since March 1st the Blues have allowed just 2.11 goals per game and allowed more than two goals just seven times in that span.  Drill down, and it is easy to see why the Blues don’t see that red light going on behind their goaltender very often.  In those 19 games the Blues allowed an average of just 26 shots on goal per game.  That is consistent with their season average of allowing just 26.5 shots per game, tied for second fewest in the league.

Here is how the teams rank overall: 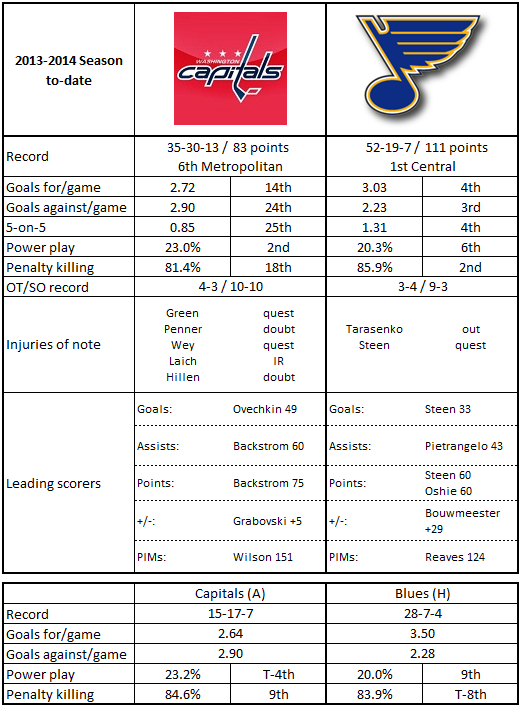 1.  Special teams have been good and not as good for the Blues lately.  Since March 1st St. Louis’ power play is so-so -- 10-for-57.  Meanwhile, their penalty killing has been very good, killing off 59 of 68 shorthanded situations (86.8 percent).

3. The Blues are one of only two teams (Vancouver being the other) to have – well, have had – three players record more than 100 penalty minutes this season.  Ryan Reaves has 124 minutes (in just 59 games), David Backes has 119 minutes, and Chris Stewart had 112 minutes.  Stewart was traded to Buffalo as part of the deal on February 28th that returned goaltender Ryan Miller and forward Steve Ott.

4.  Speaking of Miller, if he gets the call tonight it will be his third appearance against the Caps this season.  The first two came when he was wearing the blue and yellow of the Buffalo Sabres.  Not that he did poorly with that woeful team.  Miller is 2-0-0, 0.92, .975 in two Gimmick wins over the Caps this season.  And even though the colors might not have changed much in moving to St. Louis, the difference in teams is stark in an important respect.  Miller averaged seeing 35.5 shots per 60 minutes this season in Buffalo.  So far with the Blues, 25.4.  Even though his save percentage is down (from .923 with Buffalo to .915 with St. Louis), his goals against average is down more than half a goal per game (2.72 to 2.15).  As if it needs repeating, shots matter.

1.  With their next appearance in the Gimmick this season the Caps will set a record in the brief history of the Show of Shows for appearances in a season (21).

2.  Washington is one of two teams (San Jose is the other) with three players recording at least five goals in the trick shot phase.  Those Caps are: Nicklas Backstrom (7), Eric Fehr (5), and Mikhail Grabovski (5).  The Caps are the only team with any players taking 15 or more shots in the freestyle competition: Backstrom (16) and Alex Ovechkin (15).

5.  In five-on-five close score situations, the Caps rank 24th in Corsi-for percentage, 25th in Fenwick-for percentage, and 26th in shots-for percentage.  Their save percentage in those situations is .923, 19th in the league.  The Caps have had goaltending issues from time to time this season, but it has outperformed the defense in terms of doing better than possession metrics.

When Alexander Steen took the ice on December 21st he was fighting Alex Ovechkin for the league lead in goals with 24 to Ovechkin’s 29.  However, on that date Steen sat out the third period against the Edmonton Oilers as a result of a concussion he might have suffered three games earlier in a game against the Ottawa Senators.  He had taken a few high hits in three games after that, the accumulation of instances appearing to catch up with him against the Oilers.  Steen missed 11 games, and since his return he has not been quite as prolific in the goal-scoring department.  He had three goals in his first six games back, but then he followed it up with just three goals in his next 19 games.  He seemed to be regaining his touch in a three-game stretch to end March, scoring another three goals in those contest.  However, after skating 21 minutes against the Philadelphia Flyers on April 1st, he has been absent for the last three games for the Blues, the suspicion being that he has suffered a recurrence of concussion-related symptoms. He did return to practice on Monday but is questionable for the game against the Caps.  He is 4-5-9 in 18 career games against Washington.

Whether one thinks Alex Ovechkin quit on a play that resulted in a goal by the Dallas Stars or that everyone quit on the play that led to that goal in what would be a 5-0 loss to the Stars, we are now at the point where it matters how one finishes when facing the end of the playoff push.  Alex Ovechkin does not give evidence of being a rah-rah sort of captain who leads with words, either in the locker room or on the bench.  That leaves leading by example.  If the Caps are to keep their dim playoff hopes alive or play with pride and honor when those hopes have been extinguished, it starts with Ovechkin.  He has to lead by example at both ends of the ice.  That does not necessarily mean getting that last goal to get to 50.  It means doing the little things that have been notoriously absent from his game for stretches this season and especially since the Olympic break.  It will not be easy, even the scoring goals part.  Ovechkin does not have a goal in Scottrade Center in his career.

1.  Find inspiration in the little things.  The Caps got a gift from the Calgary Flames on Monday night when they shut out the New Jersey Devils, 1-0.  Do what you have to do, play little mind games, convince yourself that it is a sign that this is not over yet.

2.  First Forty for a Fast Finish.  St. Louis is one of seven teams (including the Caps) that has not lost a game in regulation when leading after two periods.  A big part of that is the fact that the Blues have allowed fewer goals in the third period (56) than every team in the league except the Boston Bruins (52). They also have more third period goals than all but three clubs.  Add to that the fact that the Blues have trailed after 40 minutes only 22 times in 78 games (third fewest in the league), and it puts a premium on the Caps being competitive early and not letting the Blues carry a lead into the third period.  Easier said than done, especially on a rink where the Blues have been so successful.

3.  Scorers score, defenders defend.  This is just the short version of the need for the Caps’ top six to perform like top-six forwards and for John Carlson and Karl Alzner to tend to business in their end.  It seems obvious, but it also seems to have been absent over the last few weeks.

The Caps have been here before.  As they were about to take the ice for Game 79 in 20070-2008 they were two points behind the Boston Bruins for eighth place in the Eastern Conference and four points behind the Carolina Hurricanes for the Southeast Division lead.  The Caps won their last four games, Carolina lost three of their last four, and the Caps were division champions headed to the playoffs.  But here, momentum matters.  That 2007-2008 team, young and full of spit and vinegar, was already on a run that saw them go 12-4-0 over their previous 16 games leading up to that last four-game push.  These Caps, veterans of six straight seasons reaching the playoffs, are 2-3-3 in their last eight games and do not have a win in regulation in three weeks.

Guess we’ll find out if this is a familiar path the Caps are walking or their version of The Red Mile.