Dennis Wideman
Theme: “If an injury has to be done to a man it should be so severe that his vengeance need not be feared.”
-- Niccolo Machiavelli

We are going to guess that Machiavelli was thinking of something other than hockey when he wrote “The Prince.” And if Dennis Wideman has designs of vengeance on Tuomo Ruutu, the Carolina Hurricane forward who ended Wideman’s season with the Caps 14 games after arriving from Florida in a deadline trade, we’re thinking Wideman’s desire for vengeance might be wrought on the rest of the league for having been denied a chance to go deep in the post-season after toiling for 61 games for a disappointing Panther team.

Thirteen games into his tenure with the Caps last spring, Wideman was cruising along – a goal and six assists, plus-6, and he hadn’t yet skated fewer than 22 minutes in any game. With Mike Green on the shelf with a concussion he suffered in late February, Wideman was just what the doctor ordered, so to speak. But late in the second period of his 14th game with the Caps, a doctor was what Wideman would need, although it might not have seemed so at the time. Wideman collided with Tuomo Ruutu in open ice, suffering what appeared to be a charley horse to his thigh. Coach Bruce Boudreau even remarked after the game that he was only “day-to-day” with his injury. Little did anyone know that what Wideman suffered was not a charley horse and a bruise, but compartment syndrome and a hematoma that required surgery that ended Wideman’s season.

The chance to help the Caps go deep into the playoffs in his rear view mirror, it is now a case of Wideman lending his talents to yet another Capitals push to escape the potholes of early playoff round exits. Even though Caps fans got a glimpse of what he might contribute, it was perhaps not a clear one. What the Caps have, first of all, is a minutes-eater. Only once in six seasons has Wideman averaged fewer than 20 minutes a game, and in the past four seasons hasn’t averaged fewer than 23:33 a game.

Wideman has been a respectable scorer from the point on the power play. He is 14th among defensemen in power play goals since the lockout (31). But on the other hand, he has the 21st worst plus-minus over that period (minus-31).

Only 12 defensemen have recorded more shots on goal since the lockout than Wideman. Then again, only 21 defensemen were on the ice for more goals against last year. Even though he has played for a few real dogs (a 57-point team in St. Louis in 2005-2006, a Florida team that would win only 30 games in 2010-2011 after Wideman was traded to Washignton), he has put up iffy plus-minus number in better environments (a second-worst minus-14 on a 91-point team in Boston in 2009-2010). There is something of a risk-reward aspect to Wideman’s play.

Fearless’ Take: Wideman has almost twice as many career special teams goals (37 – 35 on the power play, two shorthanded) than even strength goals (19). He is one of only ten defensemen to have recorded at least nine power play goals in a season at least twice since the lockout. In 453 career games he is 35-74-109 on the power play. Compare that with Mike Green, who is 41-72-113 in 366 games on the power play. One would be hard pressed to find a pair of blueliners with that kind of man-advantage production.

Cheerless’ Take: For all those goals he’s been scoring from the blue line he has exactly one goal in 30 playoff games on 65 shots. That’s a 1.5 percent shooting percentage.


The Big Question… How will Wideman do with fewer minutes?

Chewing up wide swaths of minutes has been a signature part of Dennis Wideman’s game over the past several years. Given that he is coming off a gruesome injury, and the Caps have a deep defense, he would seem to be penciled in as third pair (perhaps paired with Jeff Schultz). Last year, splitting time in Florida and Washington, Wideman got about 17 and a half minutes a game at even strength, another four on the power play, and two and a half on the penalty kill for his 24 minutes a game. This year, he might have his even strength time shaved to 16 minutes or so, his power play time perhaps cut in half (unless the Caps start drawing more penalties more frequently), and perhaps keeping his two minutes of penalty killing time a game. Will having his ice time cut by four minutes keep him fresher or render him stale?

Yes, Wideman is perhaps a risk/reward defenseman, but he is not likely to be called upon to be a shutdown defenseman on this team. That duty falls to Karl Alzner and John Carlson, and he might benefit from the steadiness of a Jeff Schultz the way Mike Green has in years past. Wideman brings a knack for scoring on the power play that the Caps utterly lacked from the blue line last year. In the regular season the Capitals’ defensemen were 7-13-20 as a group, five of the goals coming from Mike Green and one by Wideman. In the playoffs they were 1-2-3 in nine games, all the scoring coming from Green. Wideman can help add to the threat from the blue line and perhaps open things up for the big forwards on the power play. That could lift the Caps from their disappointing tie for 15th in regular season power play efficiency last season and their almost embarrassing tie for 12th among 16 teams in post season power play conversion frequency. That is where Dennis Wideman might get his best chance to exact a little revenge on the league for missing out on his chance for post-season fun last year. 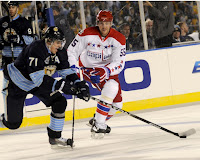 Theme: “It is better to take many small steps in the right direction than to make a great leap forward only to stumble backward."
-- Chinese Proverb

OK, you can stop laughing now. We get it. Schultz remains something of Caps fans’ personal whipping boy, the source of all disappointment, the cause of all things bad that befall the Caps. But Schultz is also the only Caps defenseman on the current roster who has posted five consecutive “plus” seasons (he has never had a minus season in the NHL). And we get that too – “plus/minus” is a flawed statistic. But when he does something in that category that no Cap has done over five years, it isn’t exactly a liability.

In last season’s results, Schultz faced a level of competition barely different from the level he faced in 2009-2010 (he ranked third among Caps defensemen in both seasons among those playing at least 50 games). What he did not benefit from, though, was strength of teammates. He had the strongest quality of teammates among Caps defensemen in the 2009-2010 season, but had only the third strongest in 2010-2011 (numbers from behindthenet.ca). But even with that, his Corsi value relative to quality or teammates dropped only slightly, but his rank improved from second among Caps defensemen in 2009-2010 to the top spot in 2010-2011. Given that Schultz contributed almost no offense of his own from the blue line in 2010-2011 (last among all Caps defensemen playing in at least 50 games in points/60 minutes), it reflected an understated responsibility in tending to business in his own zone.

Fearless’ Take: Schultz struggled in the first half of the season with consistency. He was 0-5-5, minus-1 in his first 38 games, but uncharacteristically had two instances of four consecutive “minus” games (the Caps were 2-4-2 in those games). But after his second span of four consecutive “minus” games, Schultz finished the last 34 games of his season 1-4-5, plus-7, and only twice had as many as two consecutive games on the minus side of the ledger.

Cheerless’ Take: His performance against teams in the East that made the playoffs might not be what it seems. He was 0-3-3, even, against those teams, but he was 0-1-1, plus three in three games against Pittsburgh. That made him 0-2-2, minus-3 in the other 24 games. And, although he has had occasional injury problems in the post-season, he is only 0-1-1, minus-3 in 19 career playoff games.

In the last 20 years in the NHL, only four defensemen have reached the plus-50 mark for a season – Scott Stevens, Chris Pronger, Vladimir Konstantinov, and Jeff Schultz. A hall-of-famer, a hall-of-famer in waiting, a potential hall-of-famer whose career was tragically cut short…and Schultz. He is the only defenseman – the only player since the lockout – to hit plus-50, but even the most ardent Caps fan would have to admit that there is one player who probably does not belong in this group.

But take that season out of the mix for a moment. You would be left with a player who in 246 regular season games would be 7-33-40, plus-36. That would be a player with a 2-11-13, plus-12 pace per 82 games in a shade over 19 minutes a night over a still brief career (Schultz being only 25 years of age). Forget the baggage Schultz carries (no purse jokes, please). Over the last four seasons he has averaged fewer than 2.5 goals/on ice per 60 minutes at 5-on-5. If you are looking for a first-pair, shutdown defenseman, you would probably want a better number there (to extend a comparison, Pronger has been below 2.0 in that number twice in the last four years). But if you are looking at a second or third pair defenseman, you might not turn your nose up at that kind of outcome.

If the plus-50 year never happened, Schultz might be a nice defenseman to play in a second or third pair role, giving you 18-20 minutes a night. He is not that plus-50 player. But he has been consistent, never finishing a season in minus territory. In an odd way he is reminiscent of former Caps defenseman Joe Reekie, a somewhat ungainly skater to seemed a bit awkward on the ice and who didn’t contribute much at the offensive end. But as Reekie was a suitable partner for the offensive-minded Sergei Gonchar, just as Schultz has been something of a safety blanket for the likes of a more offensive-minded Mike Green. It is worth noting that Reekie compiled 13 straight seasons in plus territory, seven-plus of them with the Caps. And say what you will about the flawed nature of the plus-minus statistic, but if more good things happen when a player is on the ice than bad things, well, we’ll take it.

The 2010-2011 season might be looked at in one way as a step back for Schultz. That would be true if the 2009-2010 season was a fair representation of the kind of defenseman he is. That might not be fair. What he has been in the other seasons of his career is closer to what seems to be his performance level. And the trick for Schultz is to make those incremental steps forward in becoming a more adept defensive defenseman, to contribute a little bit of offense here and there, and to give the Caps solid, consistent, even boring minutes.

(photo: UPI/Archie Carpenter)
Posted by The Peerless at 6:55 AM No comments: